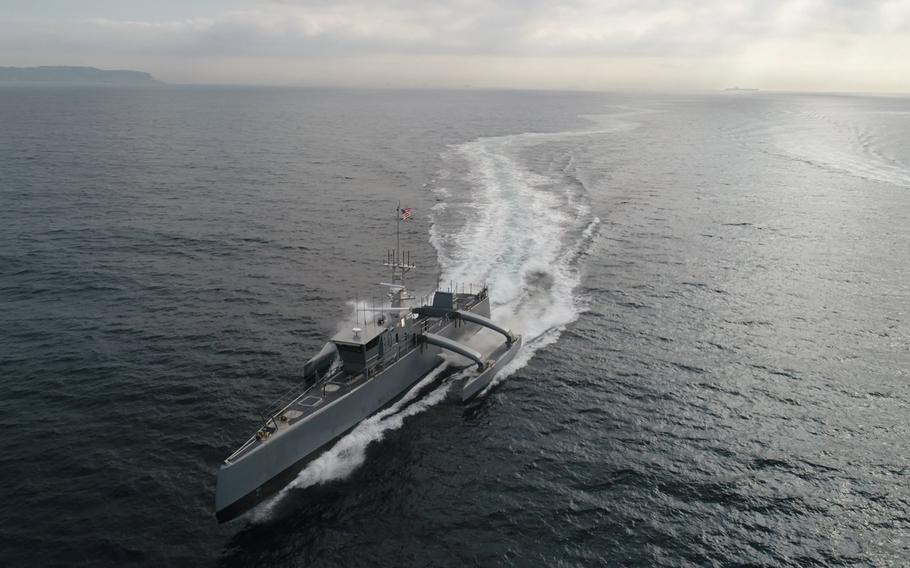 The Navy has received a $20 million sea drone prototype from the Defense Advanced Research Projects Agency. Known as the Sea Hunter, the drone could be deployed by the end of 2018 to hunt for submarines. (Photo courtesy of DARPA)

The Navy could begin deploying a self-piloting sea drone by the end of the year to hunt for submarines at a time when China and Russia are expanding their underwater fleets, according to the research agency that designed it.

The Navy received the $20 million prototype last week from the Defense Advanced Research Agency, or DARPA. Navy researchers will now work to further develop the robotic vessel — which requires no remote piloting — with the aim of integrating it into fleets.

The Sea Hunter has undergone rigorous testing in the past two years to ensure it can pilot itself safely and follow international rules for avoiding collisions at sea, according to DARPA.

Navy officials haven’t said when the drone will go into service, but DARPA said its first missions could happen later this year.

“The U.S. military has talked about the strategic importance of replacing ‘king’ and ‘queen’ pieces on the maritime chessboard with lots of ‘pawns,’” Fred Kennedy, head of DARPA’s tactical technology, said in a statement.

DARPA and Navy researchers began collaborating on the project in 2014. The Sea Hunter has no weapons. It is strictly a surveillance vessel that uses cameras and radar to spot submarines.

The 132-foot vessel is highly maneuverable and travels up to 27 knots per hour, researchers said. It will be able to track submarines for a longer period of time than can warships and planes.

Land-based technicians will monitor the drone but won’t steer it unless a problem arises.

At the Sea Hunter’s christening in 2016, former Deputy Defense Secretary Robert Work told Reuters that robotic vessels will be a countermeasure to Russia and China expanding their submarine fleets.

“I would like to see unmanned flotillas operating in the western Pacific and the Persian Gulf within five years,” Work said.