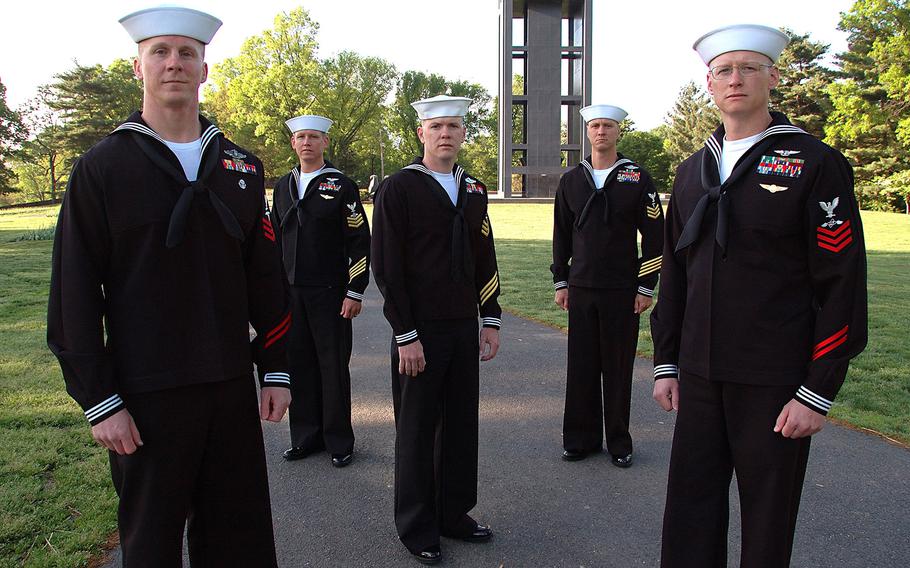 Five finalists in the Navy Reserve Sailor of the Year competition attend an event in Washington, D.C., on April 27, 2006. The Navy announced Thursday, Sept. 29, 2016, that it is overhauling its centuries old rating system. (U.S. Navy)

WASHINGTON — The Navy has scrapped its two-century-old enlisted ratings system that identified sailors by their occupation and military rank in a controversial plan to provide them greater career flexibility, the service announced Thursday.

Enlisted sailors will now be addressed only by their attained military rank, similar to how servicemembers in the other military branches are recognized. For example, a sailor previously addressed as yeoman second class, or YN2, will now simply be called petty officer second class, Master Chief Petty Officer of the Navy Steven S. Giordano said.

Giordano said Navy leaders understand the change “represents a significant cultural shift,” but he added it will also allow sailors to train and serve in more than one single job.

“This is about giving sailors more choice and flexibility and ultimately providing the Navy opportunities to get the right sailors with the right training and experience in the right billets,” he said.

Yet, some sailors across the service said they were surprised by the rating change.

Petty Officer 3rd Class Kelly Lane, an information systems technician for Yokosuka Naval Base’s Naval Computers and Telecommunications Station, said it was a “big change” that came with no warning.

“It seemed to come out of nowhere without much notice, so a lot of people were surprised it happened,” Lane said. “Usually you hear chatter about things before they happen.”

The new system, implemented immediately upon announcement Thursday, was the result of a months-long review of the Navy’s titles which was ordered by Navy Secretary Ray Mabus in January as part of the service’s plan to implement women into all positions. The Marine Corps, also under Mabus’ leadership, conducted a similar review which resulted in the service eliminating “man” from many of its occupation titles, though the Corps will keep some of its traditional titles including rifleman and mortarman.

More changes to modernize the Navy’s enlisted ratings system are expected in the future, a Navy statement said. They will occur in phases over multiple years and sailors should get plenty of advanced notice prior to changes to career processes such as advancements, training and detailing.

Sailors can acquire more than one NOS, further broadening their skill sets and chances for advancing within the service.

The new designations could also help sailors adjust to civilian life once they leave the service, Mabus said in a statement.

For example, sailors serving in the position that used to be known as hospital corpsman will now serve in the NOS entitled medical technician. The new title “better reflects the work and responsibilities” of that job and is “better aligned with the civilian medical profession,” according to the Navy statement.

“In aligning the descriptions of the work our sailors do with their counterparts in the civilian world, we more closely reflect the nation we protect while also making it easier for our sailors to obtain the credentials they’ll need to be successful in the private sector,” Mabus said.

Sailors contacted by Stars and Stripes had mixed reactions to the rating changes.

Lane, the petty officer 3rd Class at Yokosuka Naval Base, said she was pleased the new system would better align with civilian sector jobs and open up new opportunities outside of the old rating system.

However, Petty Officer Third Class Jonathan Guerra said he did not like that the new system broke with the Navy’s long heritage.

"I’m kind of against it… The Navy is the only branch that has ratings like this,” said Guerra, a master at arms stationed at Naval Support Activity Bahrain. “And everyone, especially Master at Arms, are extremely prideful on being an MA, having that rate to ourselves.”

The decision to get rid of the traditional Navy rating system has also spawned an Internet petition at whitehouse.gov that has garnered more than 16,500 signatures in a day.

The petition description reads: “For 241 years, Navy personnel have been identified by their job specialty... Being known by your job title was a sense of pride. A sign of accomplishment. The Secretary of the Navy and Chief of Naval Operations just senselessly erased this tradition.”

The Navy’s enlisted rating system dated back to the 18th century British Royal Navy from which the U.S. Navy was initially modeled. The system, while beloved by many sailors, was more complicated than the other services. The Navy regularly had to add or retire titles as jobs changed. One Navy estimate said the service has retired more than 650 titles in its history.

Navy officials acknowledge the changes were likely to be greeted with push back from many sailors and veterans.

The Navy’s own assessment of the changes implemented Thursday noted it would take “a generation of sailors” before the new system is accepted as normal.

Stars and Stripes reporters Chris Church and Tyler Hlavac contributed to this report.