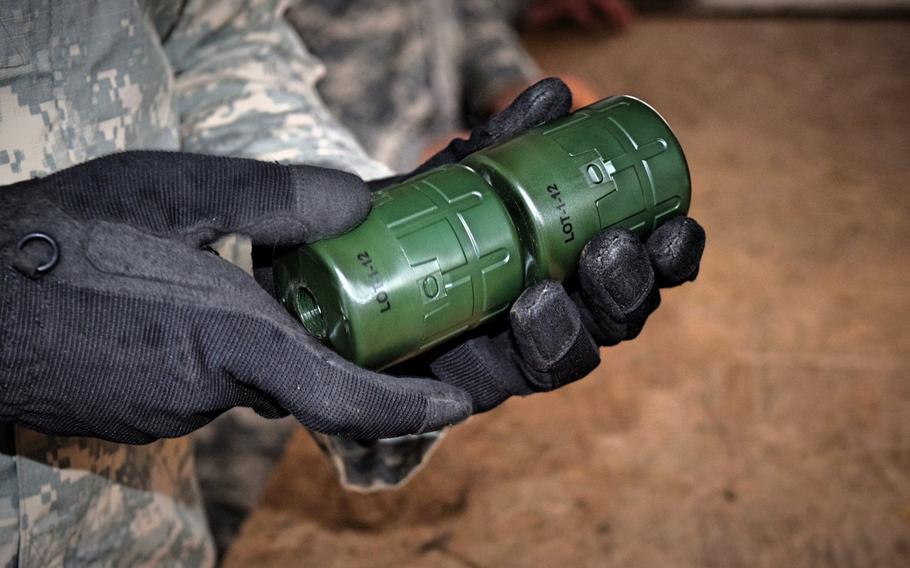 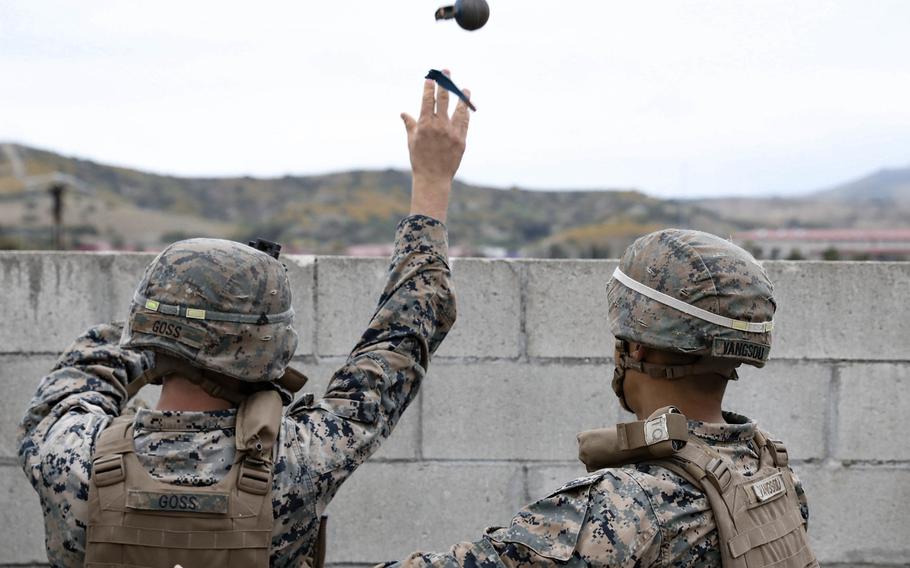 Several new types of grenades, including one that can be stacked to create a larger explosion, have garnered interest from the Department of the Navy.

The Crane, Ind.-based Naval Surface Warfare Center issued a request for information about the modular grenades last month, along with several other early-stage procurement notices about several flash-bang grenade variants. The Marine Corps also has expressed interest in the stacking grenades.

The notices come as the military looks to expand its nonlethal-weapons capabilities for a complex, modern battlefield, where troops might encounter more low-intensity conflict scenarios or situations in which civilians and enemy combatants are intermixed.

“Lethality is absolutely critical in the modern combat environment that we find ourselves in, but the world’s most lethal, incredible force must also be able to compete in all the other phases of combat,” Marine Col. Wendell B. Leimbach Jr. said earlier this year at the National Defense Industrial Association’s Armament Systems Forum in Fredericksburg, Va., the association’s magazine reported.

Leimbach, a tank and acquisition officer, is director of the Pentagon’s joint nonlethal weapons directorate, based in Quantico, Va., which oversees the development of flash-bang devices and other weapons designed to stun, incapacitate or confuse, rather than kill.

They are designed for offensive use, giving a larger shock effect with less fragmentation to protect advancing friendly troops, a description on the company’s website says.

“These are specifically designed for use in closed rooms, such as bunkers, buildings or semi-closed areas like trenches,” the website states.

The grenades bear a slight resemblance to Legos, and, like the building blocks, can be coupled together.

“Modular offensive hand grenades give scalable shock effect and variety of use,” the website says. “Each module can have its own fuse, and grenades can be used either separately or by attaching two to three modules together.”

“Fragmentation hand grenades are meant for defensive use and give an extensive burst of fragments with a [360-degree] distribution,” NAMMO said in a statement.

That makes them less than ideal for applications like clearing rooms, in which any civilians present could be killed or injured inadvertently instead of just knocked out.

In addition to seeking more information on stackable grenades, the Naval Surface Warfare Center also has issued notices during the past two weeks that it is conducting market research on two types of flash-bang grenades, including a variant used to disorient or daze, rather than to kill or wound.

The requests all state that no funding has been approved for procurement, and the government has not committed to buying any of the grenades.

The center also notified the industry last month that it plans to issue a request for proposals for a 5-year contract to produce thousands of 9-bang flash-bang grenades for up to $16 million.

In August, Leimbach wrote in the Marine Corps Gazette that while he spent the majority of his career “enhancing the lethality of the Corps,” he has come to understand the importance of nonlethal weapons, such as flash-bangs, for giving troops space or time to determine hostile intent in a complicated combat environment.

“Wherever Marines are deployed, 21st century operational environments will require the use of [nonlethal weapons],” he wrote in August.