Navy making sure sailors get the chance to vote, no matter where they are 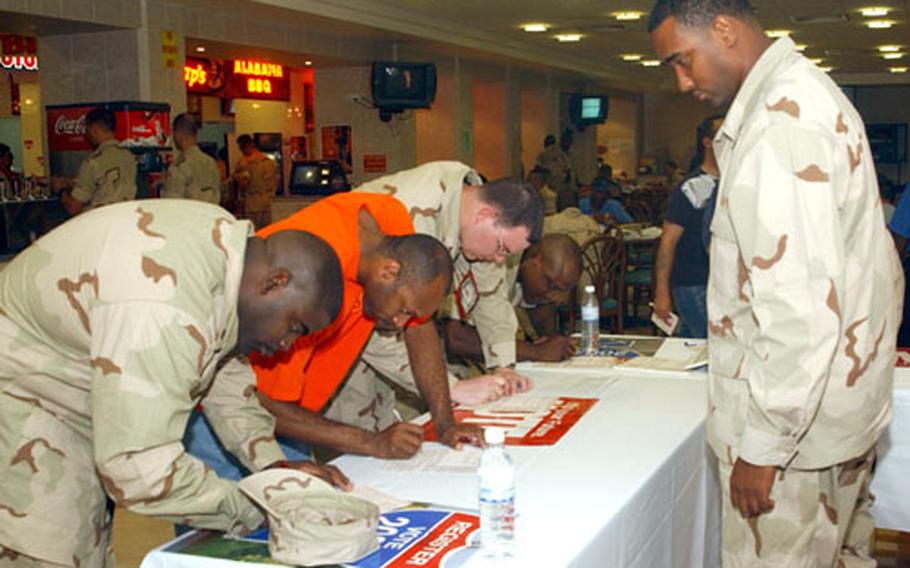 NAVAL STATION ROTA, Spain &#8212; In an effort to ensure no absentee ballot is left behind, Navy ships out to sea are giving ballots top priority and encouraging sailors to fax or even e-mail their votes.

This year, the Navy has launched an aggressive campaign to help sailors vote no matter where they are in the world.

&#8220;Believe me when I tell you that there isn&#8217;t a stone unturned,&#8221; said Lt. Bill Danzi, the Navy&#8217;s Voting Assistance Program action officer in Millington, Tenn., in an e-mail to Stars and Stripes. &#8220;There is a constant vigilant effort regardless of location or command operation to ensure the ballots get back to the elections commissions on time and that elections commissions receive the ballots.&#8221;

Postal employees are sending containers, boxes and envelopes with votes with special priority. Some aircraft carriers have special drop-off boxes placed around the ships so the 5,000 sailors can get their ballot out in time. And unlike the last presidential election, all ballots are postmarked.

The Navy estimates that there are 1 million potential absentee voters, including active-duty sailors and officers, reservists, civilian employees and eligible family members, according to Danzi.

Some ballots from states such as Illinois and Michigan have come in late because of legal wrangling over long-shot candidate Ralph Nader getting on the ballot.

Of the thousands of absentee votes cast this year, those coming from under way ships might have the most challenging and complicated route to election headquarters.

Mail aboard ships is often unpredictable. It can take nearly two weeks to get mail to them and various factors, including weather and aircraft problems, can postpone a drop-off and pick-up. Ships not in port typically rely on aircraft to transfer mail.

Four years ago, the Navy rushed a small bag of ballots that did not get mailed from ships. About a dozen of the ballots were from ships in the Persian Gulf that supported the USS Cole after the terrorist bombing in 2000.

The Navy has 161 ships away from their homeport and nearly 50,000 people deployed worldwide, according to the Navy&#8217;s Web site. The Navy doesn&#8217;t know how many absentee ballots have been mailed, but Danzi said the 1,650 voting assistance officers throughout the fleet are helping make sure everyone who wants to vote will.

In the small Middle Eastern island of Bahrain, home of the Navy&#8217;s 5th Fleet, sailors were encouraged this past summer to get their ballots in early.

&#8220;We know that being deployed in the Arabian Gulf doesn&#8217;t make mail real easy so that&#8217;s why we&#8217;ve taken these measures to make sure people know well in advance what they need to do and have all the materials they need,&#8221; said Lt. Bill Speaks, 5th Fleet spokesman.