Navy looks to eliminate the shakes from its submarines 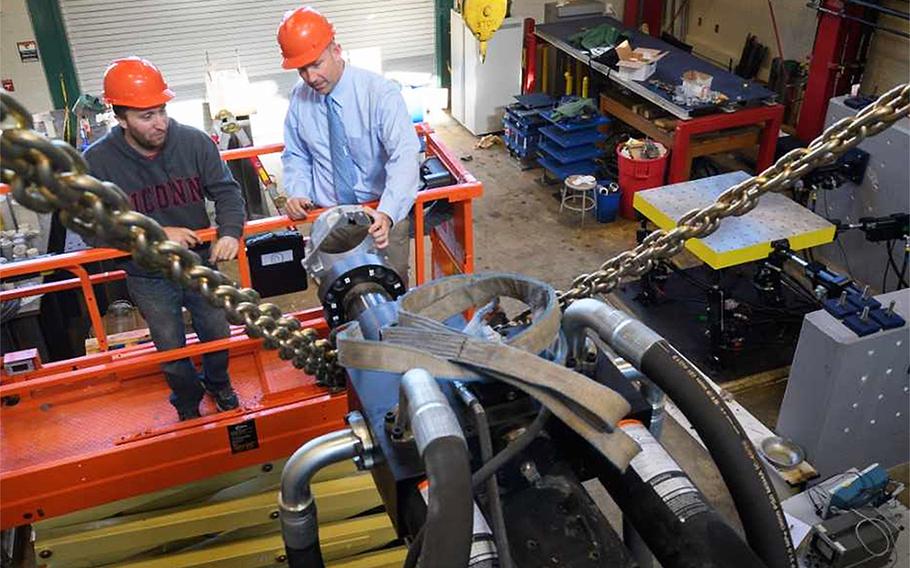 In the Navy’s ongoing quest to build a more stealthy submarine, service-funded research is close to yielding a new method for boat builders to test how much vibrational noise a sub will emit before it ever touches water.

The University of Connecticut research team’s method sounds simple at first — much of it centers around studying a pair of modified, shaking tables — but years of complex math and advanced physics have gone into creating precise measurements for how much an individual submarine component will shake.

After seven years and $1.6 million in funding from the Office of Naval Research, the researchers say the method will help submarine builders incorporate simpler, less expensive details into the design phase of the boats.

The research comes as the U.S. submarine fleet shrinks, due to the retirement of aging Los Angeles-class submarines from the Cold War era, while demand for submarine missions from U.S. combatant commanders around the world remains high. The Navy is building two Virginia-class submarines annually, but the 2019 30-year shipbuilding plan calls for an additional 16 to be built beyond that rate, in line with the White House’s stated goal of a larger Navy.

The Navy already uses sound-dampening technologies like polymer-rubber tiles and quieter propulsion to prevent detection by other navies, but in the undersea world, even tiny noises can tip off an adversary.

“The more quiet they can be, the better,” said Rich Christenson, a civil and environmental engineering professor who advises the university’s graduate students working on the project.

Christenson and his students add parts to the two shaking tables, which seismic engineers normally use to test how a structure will hold up to an earthquake.

The tables are hooked to a computer that tells them to jiggle the parts at the same rate as if they were installed in a submarine operating underwater.

A big challenge is devising the complex numerical models for the computer to run the simulations, Christenson said, adding that the team must consider how the water interacts with the submarine’s structure.

Simulations are extremely exacting, he said, with movements as fine as 1/100 of an inch.

The precision required as they formulate algorithms for a slew of components is part of what makes the lab work so time-consuming, Christenson said.

“A lot of this stuff hasn’t been done before,” he said. “It’s always something different, which is fun.”

If the team determines a vibrating part is too loud, it looks at possible remedies.

A solution might be to add springs and dampers to equipment or thicken the padding between a component and the floor, Christenson said.

These are inexpensive fixes that can be a bigger, more costly hassle to implement after the submarine is assembled, he said.

Making these simple adjustments in design also could allow a builder to use off-the-shelf components instead of customized ones.

Electric Boat, a subsidiary of General Dynamics and one of the Navy’s two primary submarine builders, has expressed interest in the testing, Christenson said.

Christenson first got the idea for the vibrational testing by talking to graduate students who were Electric Boat engineers, he said.

The immediate goal is to create a basic test that the university can publish in a journal and builders can adapt for their own testing, he said.

“Hopefully without too much effort, they can convert it to something very useful to them,” Christenson said.