Navy looks to advancements in 'fog of war' for missile defense 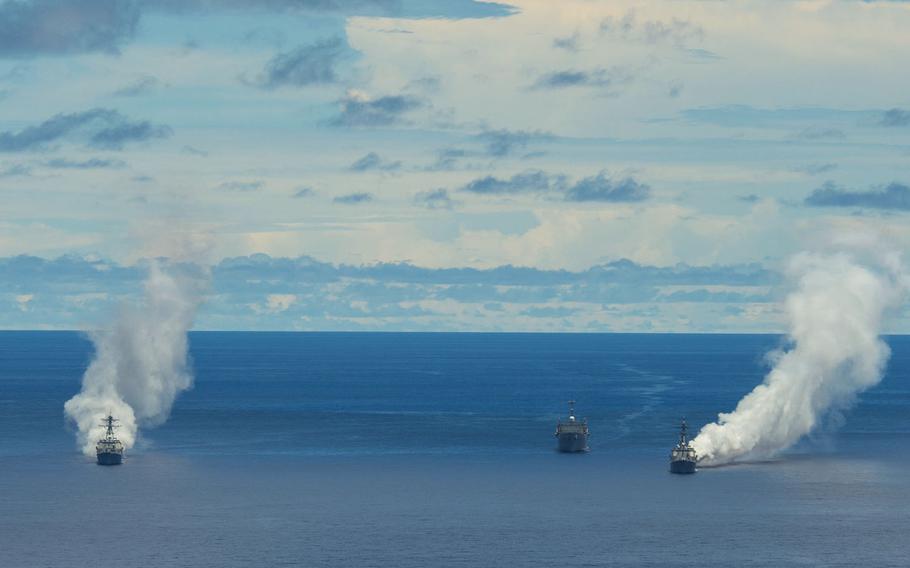 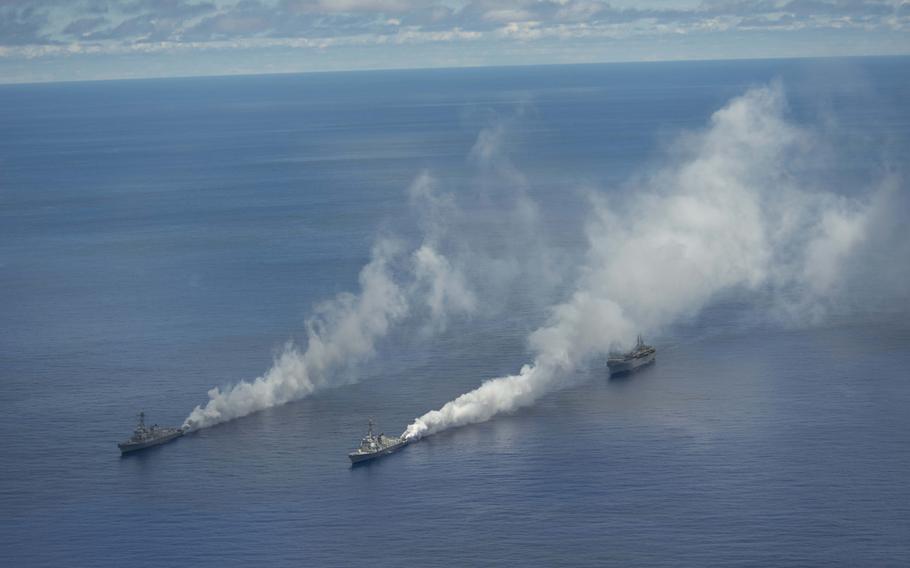 YOKOSUKA NAVAL BASE, Japan — The U.S. Navy is sea testing a carbon-fiber “fog” that officials hope will defeat the guidance systems of missiles aimed at its ships.

The Pandarra Fog that shrouded three ships south of Guam recently is one part future tech, one part throwback.

Obscurants have been used widely by combat aircraft and vehicles since World War II. The simplest systems used metal particles to mask infrared signatures, thereby throwing off a heat-seeking missile. However, guided missiles have advanced to detect other signatures across the electromagnetic spectrum.

China has developed a missile designed to strike a moving aircraft carrier, as part of a bid to deter access to international waters in the East and South China Sea, according to the Defense Department’s annual report on China’s military. Such advances have left planners looking at ways to counter such missiles, including radar and satellite jamming, cyberwarfare and other methods besides the costly and risky method of shooting one out of the sky.

Pandarra Fog “is a potential game-changer in terms of effectiveness of a layered approach to [missile defense],” said Capt. Dave Adams, head of the 7th Fleet Warfighting Initiatives Group.

In late June, the USS Mustin, USS Meyer and USS Cable tested the obscurant over four days in a variety of sea conditions south of Guam, 7th Fleet officials said.

“This was also the first time ships were placed in the obscurants cloud, and we significantly advanced our hypothesis that there would be no damage to our ships and equipment,” Adams said. “There’s still more work to do, but results all point in the right direction.”

The Army and the Air Force also brought equipment through the fog to test out Pandarra Fog’s potential.

The Army has been looking for a new obscurant since at least 2012, when it solicited bids for $100,000 in research grants. The grant noted that “current smokes have significant environmental persistence that may pose health hazards.”

Pandarra Fog’s composition is still a secret that Navy officials declined to discuss, though Adams said it had been “extensively tested” to ensure no harm to sailors or the environment.

Besides making U.S. ships harder to strike, the fog could also be useful for counter-targeting, Adams added.

Pandarra Fog is still likely years away from fleetwide deployment, assuming the service ultimately adopts it; Navy officials must next prepare a roadmap for technical and tactical requirements before the service considers an obscurants program.

However, multiple Navy academics have long argued that ship obscurants make sense both tactically and financially.

A 2012 Naval Postgraduate School research paper advocated the adaptation of the Army’s Humvee-mounted Coyote units for use on ships. Six of the units, which cost about $150,000 each, could cover a strike group of four or five ships, according to authors Dylan Ross and Jimmy Harmon.

A 30-pound box of obscurant, which would last about four minutes, costs about $1,000, according to Thomas Culora, a Naval War college professor who called for an obscurants program in a 2010 paper.

“Employment of a relatively low-cost obscurant system would prompt potential opponents to re-examine and adapt their current missile systems,” Culora said. “This too begins to tip the cost differential back in favor of the defense.”