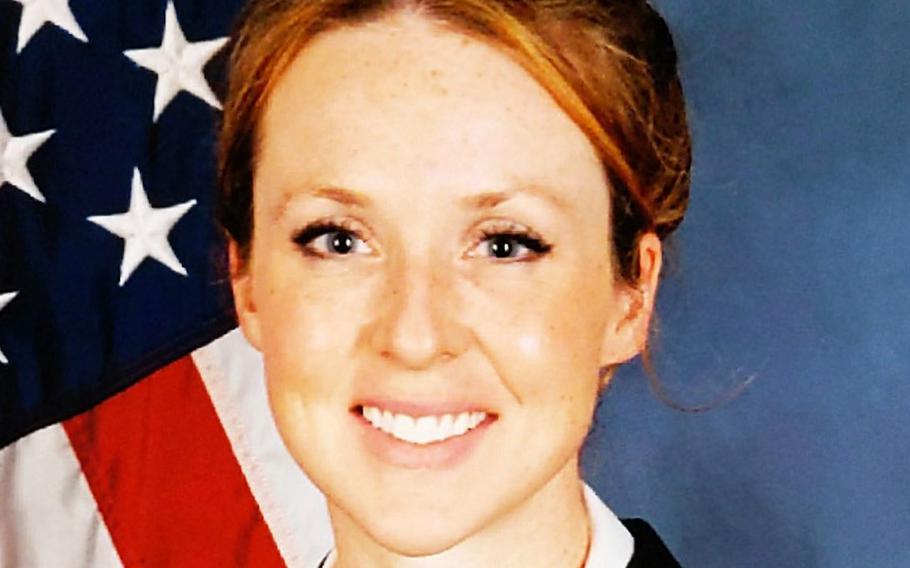 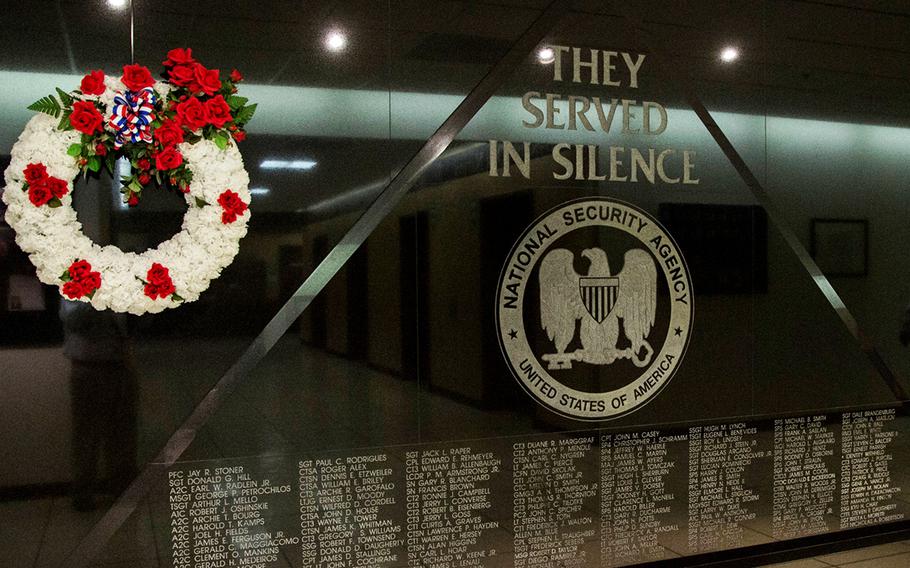 A black granite wall inside the National Security Agency lists 176 military and civilian cryptologists — the code-makers and code-breakers that protect U.S. communications and crack adversaries’ systems — who’ve been killed in the line of duty since World War II.

Of those, 174 have been publicly named. Only two of them are women.

Next week, Senior Chief Petty Officer Shannon Kent will become the third, when her name is unveiled as the 177th entry on the National Cryptologic Memorial.

A ceremony honoring her at the spy agency’s headquarters complex at Fort Meade, Md., is slated for Feb. 28 and is expected to include family members, an NSA spokesman said this week. She will be the sixth sailor and the first Navy linguist named on the wall since the Cold War.

An Arabic linguist with Fort Meade’s Cryptologic Warfare Activity 66, Kent was among the four Americans and more than a dozen others killed in a suicide bombing in the Syrian town of Manbij on Jan. 16. Her death has brought attention to the work female servicemembers have been doing alongside elite front line units, and has prompted changes to a flawed Navy commissioning and waiver process that led to her deployment in lieu of attending a doctoral program.

Typically, NSA unveils newly added names in a wreath-laying ceremony at the 8-by-12 monument around Memorial Day weekend each year. The names of 23 servicemembers have been added to the wall since the 2001 ceremony, when NSA began a tradition of declassifying and sharing their stories. Kent’s name will be the first etched into the polished stone wall since May 2015.

The wall is housed inside a secure area not generally open to the media or the public, but a replica is displayed at the National Cryptologic Museum, located near the NSA headquarters complex at the Maryland base.

Along with the names and the NSA seal, engraved into polished stone are the words, “They served in silence,” reflecting their secretive duties. But Kent’s death, less than two months into her fifth combat deployment, has highlighted the role of women like her supporting elite outfits on hushed front line missions against insurgents and terrorists.

Kent was killed while doing intelligence legwork to aid larger efforts to track remnants of ISIS, her husband, a retired Green Beret warrant officer, told Stars and Stripes. The 35-year-old mother of two and cancer survivor, who spoke seven languages and was considered a “badass” by many of her peers, spent much of her career working alongside special operations troops, family and friends have said.

Like her, at least four of the five Navy cryptologic technicians named on the NSA’s memorial wall since 2001 — all men — were killed while supporting Navy SEALs and other elite units.

In May 2006, the spy agency added the first female servicemember’s name, Sgt. Amanda N. Pinson, 21, of Lemay, Mo., who was one of two soldiers with the 101st Airborne Division (Air Assault) killed in Tikrit, Iraq, when a mortar round exploded near the division’s headquarters in March of that year. She was the first female signals intelligence analyst killed in combat, according to the Army.

In May 2008, South Plainfield, N.J.-native Sgt. Trista L. Moretti, 27, an Army signals intelligence analyst with the 25th Infantry Division who was killed in a June 2007 mortar attack in Nasir Lafitah, Iraq, became the second woman named on the wall.

A native of Pine Plains, N.Y., whose state police officer father and firefighter uncle had responded to the World Trade Center attack in New York City, Kent was motivated to join the Navy in late 2003 in part by the 9/11 attacks. She’d studied Arabic at the Defense Language Institute in Monterey, Calif., graduating in 2005.

“She is remembered fondly by her teachers,” said Natela Cutter, a spokeswoman for the language school, in an emailed statement last month. “She will be greatly missed.”

Prior to Kent, the last Navy linguists to have their names inscribed on the wall were third class petty officers Patrick R. Price and Craig R. Rudolf, who died in the Mediterranean Sea when the EA-3B Skywarrior they were aboard crashed while trying make a night landing on the USS Nimitz on Jan. 25, 1987, killing all seven crew members aboard. They were the last Cold War fatalities in the Navy’s aerial reconnaissance program, according to the National Cryptologic Museum Foundation.

Kent became the first female U.S. servicemember killed in Syria since U.S. forces began fighting there as part of the U.S.-led campaign against the Islamic State group that began in late 2014. She is slated to be buried at Arlington National Cemetery next week.