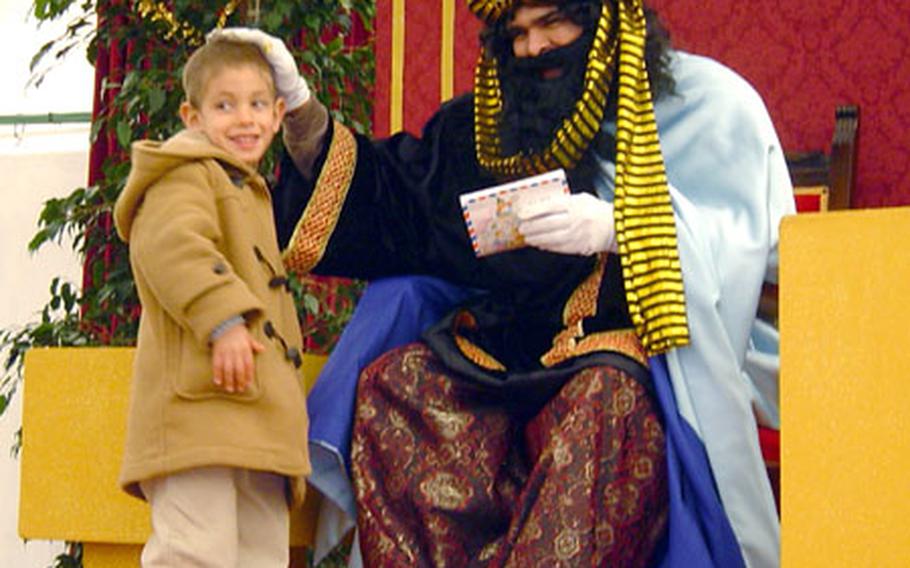 Lt. Ken Vargas of Naval Station Rota, Spain, recently spent a few days trying out a new career. The public works officer headed into the community and became a postman.

But not just any postman, he was the Royal Postman.

In Spain, Santa takes a back seat to the three kings, who deliver presents to children on Jan. 5, the Epiphany. Epiphany is celebrated as the day the wise men delivered gold, frankincense and myrrh to the baby Jesus.

Since then, the three have been delivering gifts to well-behaved Spanish children and it&#8217;s the Royal Postman&#8217;s job to get the kings those letters.

It&#8217;s a job with a lot of responsibility that included two parades, three nights in Rota receiving the letters, a helicopter flight and a costume and full beard.

All those kids came in a wide variety of ages, he said.

Despite the heavy responsibility of making sure the letters get to the three kings, Vargas said, it was a lot of fun.

The position&#8217;s been held by an American, according to base public affairs officer Lt. Allie Freeman, for a long time. So long, in fact, Freeman said, that neither base personnel nor the Rota mayor&#8217;s office could remember how long an American has been the Royal Postman.

The tradition, Freeman said, is a great way for base personnel to interact with local residents and solidifies the base&#8217;s friendship with the Spanish.

&#8220;This participation is the great way for the U.S. Navy servicemembers to experience a local Spanish tradition and learn about the culture,&#8221; she said.

And, it seems, it&#8217;s the perfect way for Spanish children to ensure that their gift lists make it into the right hands.