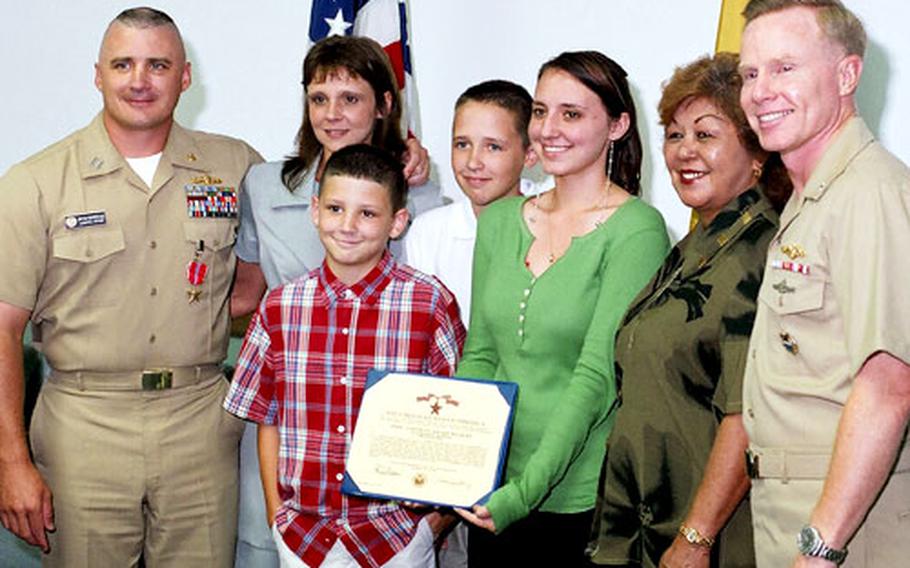 Lt. Bryan Boudreaux, a supply officer with Military Sealift Command in Guam, was awarded the Bronze Star during a Tuesday ceremony on Naval Base Guam. Boudreaux was recognized for outstanding and courageous service as a property officer with the Project and Contracting Office in Baghdad between Oct. 24, 2004, and March 26.

Boudreaux was credited with demonstrating &#8220;exceptional knowledge and resourceful expertise&#8221; in a dangerous environment, particularly during a rocket attack on the U.S. Embassy on the evening of Jan. 29. When a rocket passed through a wall into the room in which he and about 20 co-workers were relaxing, he threw himself on top of 1st Lt. Brian Lomax, shielding Lomax from harm.

Boudreaux then administered first aid to others in the room and assisted in evacuating the injured. Having been a Marine Force corpsman for nine years, Boudreaux credited his training for his actions.

Two individuals died and seven were injured in the attack.

Bryan&#8217;s wife, Kristi, at the ceremony with the couple&#8217;s sons, Bryan and Kristopher, and daughter, Brittney, said she did not learn about the incident until her husband&#8217;s return.

Kristi Boudreaux said she is proud of her husband but not surprised.