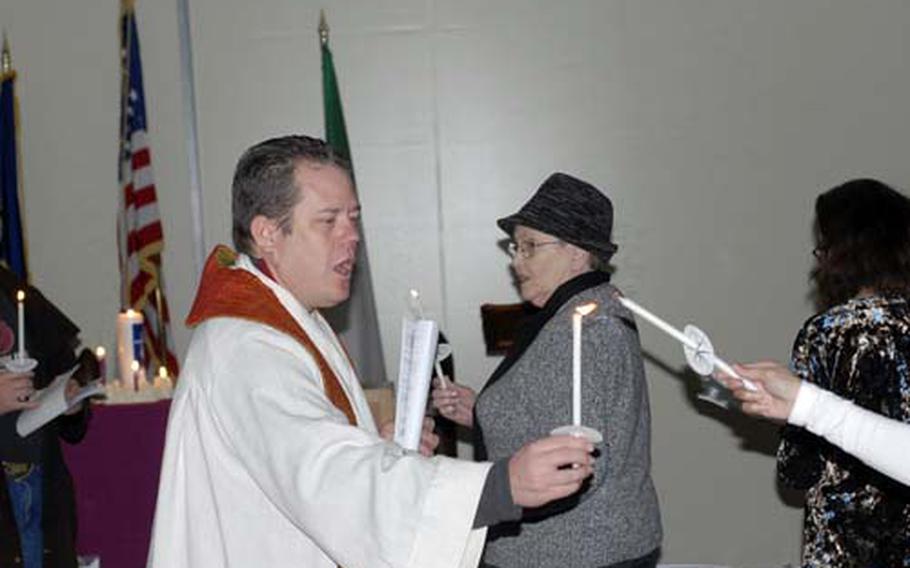 Navy Chaplain (Lt.) Doug McCormick lights the faithfuls&#39; candles during the Christmas Eve service at NSA Gaeta, Italy. About a dozen people attended the service, which could be the last Navy chaplain-led service in Gaeta after 41 years of services. (Mark Abramson / S&S)

Navy Chaplain (Lt.) Doug McCormick lights the faithfuls&#39; candles during the Christmas Eve service at NSA Gaeta, Italy. About a dozen people attended the service, which could be the last Navy chaplain-led service in Gaeta after 41 years of services. (Mark Abramson / S&S) 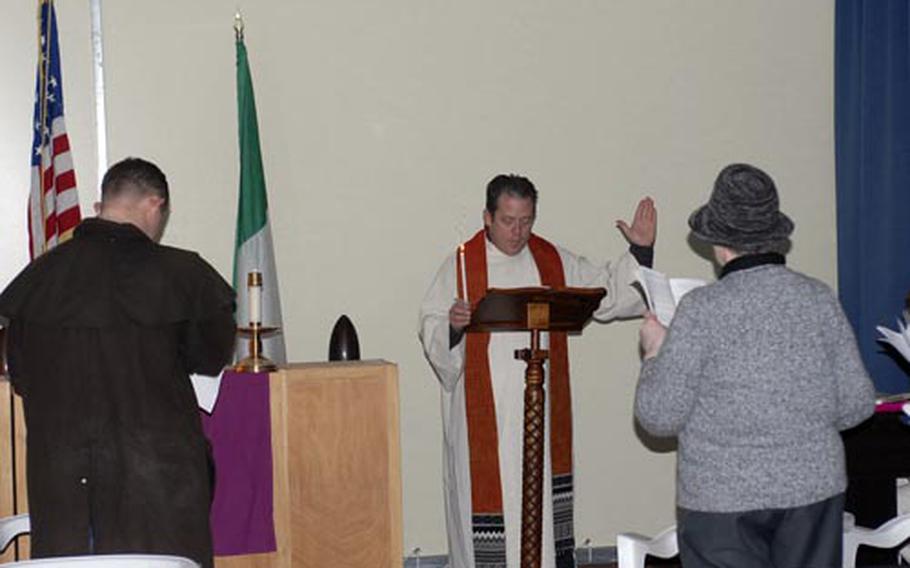 The 41st Christmas Eve service led by Navy chaplains in Gaeta included Christmas carols and Navy Chaplain (Lt.) Doug McCormick reading the Christmas Story. The Navy is moving its chaplain out of Gaeta sometime in the near future, which means Wednesday night’s service could be the last one led by a chaplain in Gaeta. (Mark Abramson / S&S)

GAETA, Italy &#8212; A beautiful starlit Gaeta Bay provided a picturesque backdrop for what very well could be the last Navy-led Christmas Eve service in the area.

About a dozen people, including young children, gathered at the Naval Support Activity base at Gaeta Bay for the service Wednesday, which was led by Navy Chaplain (Lt.) Doug McCormick, of the United Methodist faith.

Fireworks, a holiday tradition in Italy, could be seen going off across the bay during the service.

People in attendance ushered in the holiday by singing favorites, like "O Holy Night" and "Silent Night." McCormick led the service from behind an altar adorned with candles.

It was the first Christmas Eve service held at the base&#8217;s Morale, Welfare and Recreation Center in the 41-year history of the Navy&#8217;s services in Gaeta, McCormick said. Most of the previous services were held at the nearby Monte Orlando base, which is slated to be turned over to the Italians as the Navy downsizes in the region.

McCormick, who now is based in Gaeta, will be leaving soon because he is changing duty stations.

But even McCormick acknowledged that chaplains in Naples will be the ones who decide whether to make the 90-minute trip to Gaeta to continue the tradition. McCormick said he didn&#8217;t want to focus on it possibly being the last Navy service in Gaeta. Rather, he said he wanted to make it a joyous celebration with Christmas carols and a recanting of the Christmas story.

"Tonight&#8217;s service is about the songs," McCormick said.

Gaeta resident Roberta Viola was playing the piano as people sang those songs. She has played piano for the past 21 Christmas Eve services on Gaeta bases.

"The experience has been unique and wonderful," she said. She added that she will miss playing and the interaction the services gave her with the American community here.

The Christmas Eve service is just one part of how Christianity and the U.S. military have become entwined in Gaeta, McCormick said.

Gaeta is where Pope Pius IX became the first pope to step foot on U.S. territory when he visited the USS Constitution in 1849, McCormick said.

Gaeta also has a Piazza Capodanno in Gaeta, which is named after Navy Chaplain (Lt.) Vincent Capodanno, who posthumously received the Medal of Honor, Purple Heart and Bronze Star for service in the Vietnam War. Capodanno&#8217;s family lineage can be traced back to Gaeta.