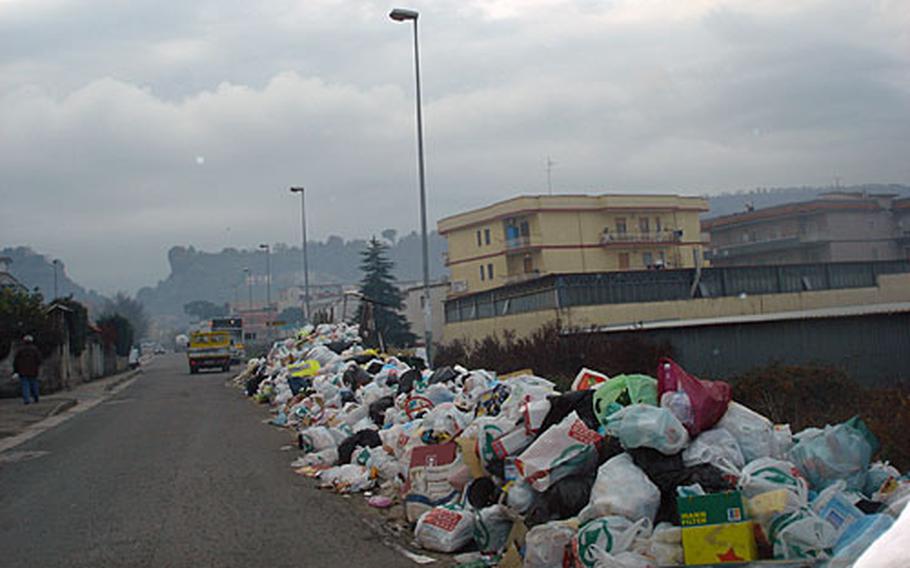 Mounds of smoldering trash line Via Campana, one of the roads leading to Carney Park, the Navy’s recreational facility in Naples. (Lisa M. Novak / S&S)

NAPLES, Italy &#8212; The U.S. Navy in Naples is telling personnel to leave work early to avoid traffic delays caused by ongoing protests over the trash crisis.

With no end in sight for the trash problems that are plaguing Naples, Italians have protested in several areas, resulting in blocked roads, clogged highways and inaccessible traffic circles.

Two weeks ago, plans to reopen the Pianura dump spurred public protests, during which residents took to the streets, blocking roads by strewing garbage and burning trash containers across various intersections and blocking highway exit and entrance ramps.

Protesters frequently blocked entrances and exits for the Tangenziale, the major highway used by commuters from this area.

In an ongoing effort to ensure military personnel avoid areas of congestion and protests, supervisors of Navy employees can use flexible work schedules, according to Navy officials. Some employees can leave the office at 4 p.m., an hour earlier than normal, and supervisors also can let employees work from home if their jobs allow.

A few motorists also took advantage of the Navy&#8217;s plan to pay for hotel rooms at the base lodging rather than risk the drive home, said Lt. Cmdr. Wendy Snyder, a spokeswoman for Navy Region Europe.

Italians staged numerous protests throughout the city Monday, and set at least 43 fires the night before, according to ANSA, the Italian news service.

Gianni De Gennaro, the commissioner appointed by the government to resolve the crisis, announced Monday a short-term plan calling for, within the next 10 days, the re-opening of existing dump sites in the region. Approximately 42,000 tons of garbage is slated to go to the site in Ariano Irpino, 35,000 tons to the site in Villaricca, and 21,000 tons to the site in Montesarchio, according to Italian media reports. The plan also calls for temporary &#8220;storage&#8221; sites, to be set up in Marigliano, Ferrandelle and Pianura.

De Gennaro&#8217;s plan angered both residents and local leaders of the areas slated to receive the tons of garbage, prompting calls for more protests in the coming days.