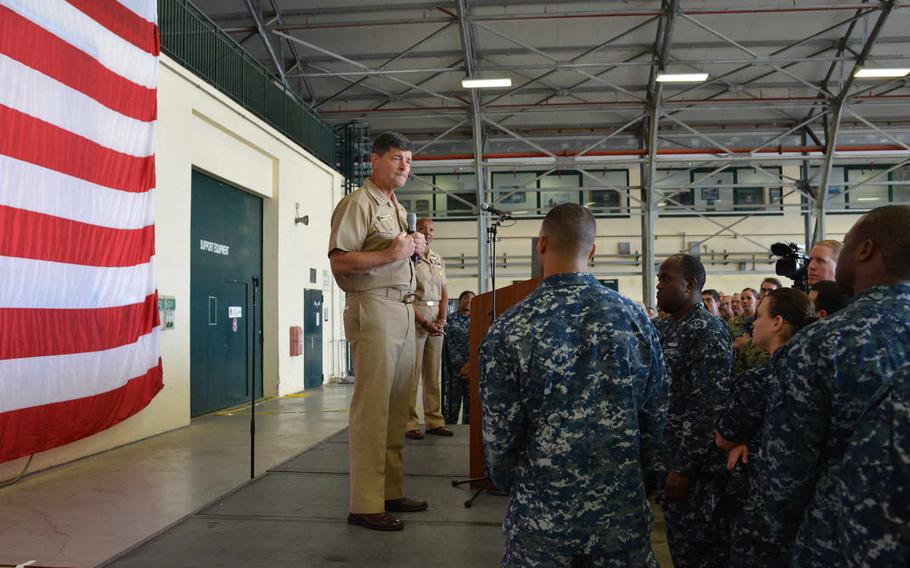 NAPLES, Italy — Sailors can expect delays in re-enlistment bonuses and duty station moves as Congress continues to hash out a fiscal 2016 budget.

The Navy is paying for both items on a month-to-month basis under a budget resolution passed Oct. 1 in lieu of a full-funding measure. The stop-gap forces the service to carefully consider who receives money when, Chief of Naval Personnel Vice Adm. Bill Moran told sailors here Wednesday.

Moran also said that expanding sailor paternity leave — a prospect raised Tuesday by his boss, Chief of Naval Operations Adm. John Richardson — would be a lengthy process that would require Congressional approval and buy-in from other services.

“We’re a long ways from that,” Moran said.

During his visit to the Naples base — home to U.S. 6th Fleet and the Navy command overseeing Europe and Africa — Moran answered sailors’ questions on everything from the proposed 401(k)-style retirement option included in the pending defense bill to whether future Navy regulations might allow beards.

Those with the highest priority for the re-enlistment bonus include anyone facing a hard End of Active Service deadline, those re-enlisting to fulfill obligated service, and nuclear-trained sailors. Orders for military moves, known as permanent change of stations, or PCS, will go first to sailors deployed as individual augmentees and to those assigned to fleets and other operational units.

“We prioritize our PCS moves so we don’t disadvantage operational units,” Moran said. “Everything else we let fall to another tier.”

Richardson, who is visiting Hawaii and overseas bases after beginning his tour as CNO earlier this month, asked sailors for their opinion on the right amount of paternity leave and said officials were working on the issue, according to an Associated Press report.

The Navy tripled the amount of paid maternity leave for sailors earlier this summer, to 18 weeks, pushing some to call for increased leave for fathers. Married male sailors currently receive 10 days of leave.

Moran’s office has said in the past that it is looking into paternity leave under its 10-year personnel overhaul, known as the Sailor 2025 initiative. Moran stressed Wednesday that while the change to maternity leave was a matter of Navy policy, federal law restricts leave for married fathers.

A former P-3 pilot now in his third year as head of the Navy’s personnel issues, Moran has focused on incentives — including increased sea-duty pay — to bolster retention and push more sailors to sea. He’s also advocated for more flexibility in the service’s rigid talent-management system.

One of his efforts, an expansion of a sabbatical program that would allow high-performing sailors to leave the service for up to three years, is included in the defense authorization bill now awaiting the president’s signature. President Obama has threatened to veto the measure for an unrelated issue.

Other efforts are being lead by the Pentagon, including permission to scrap high-year tenure, a military rule that limits the time a military member can remain in service without advancing in rank. Moran has said the “up-or-out” concept forces sailors into a limited set of career options.

Sailors in Naples asked about changes to the military retirement system included in the defense authorization bill, which would create a 401(k)-style plan for new sailors beginning in 2018 and lower the amount of the 20-year pension.

Moran stressed that sailors serving today would be grandfathered into the current 20-year pension plan and that some would be given the option of enrolling in the new plan.

One issue not up for debate, the admiral said, is beards.

“If you want to grow a beard, go do something else for a living,” he said.