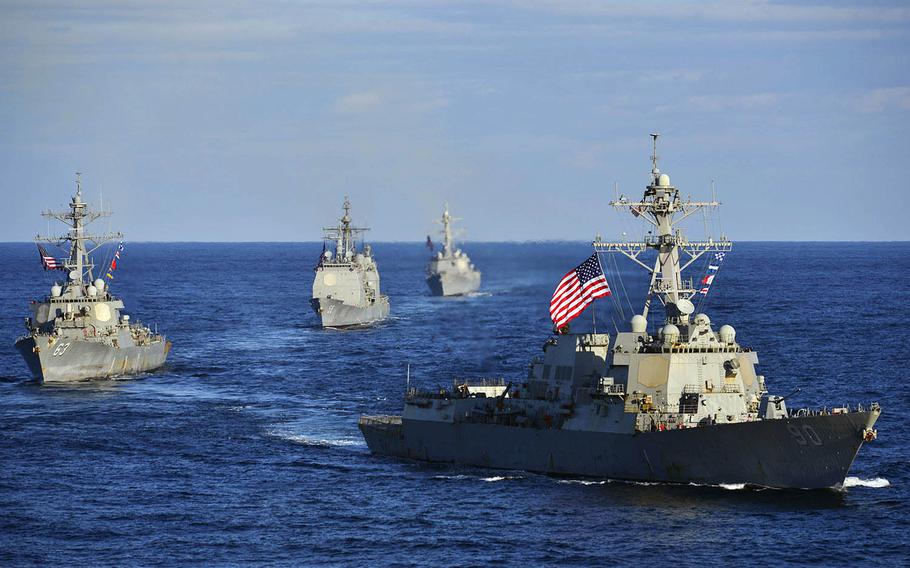 YOKOSUKA NAVAL BASE, Japan — The Navy has formally launched a new unit that will oversee maintenance, training and certification for its ships in the Pacific.

The service issued a statement Tuesday announcing the establishment of Naval Surface Group Western Pacific, which was stood up as a detachment in October but became a permanent command based out of Yokosuka — home of the Navy’s 7th Fleet — on April 11.

“This new command will manage ship activities in the maintenance and basic phase, enforce the readiness assessment and certification process within those phases and closely coordinate with the ship’s operational commander until a ship is certified Basic Phase Complete by [the group],” the statement said.

Surface Forces commander Vice Adm. Richard Brown touted the benefits of the group last week during his first visit to Japan since assuming the position in January.

The 7th Fleet is making progress on addressing readiness issues, Brown told Stars and Stripes in an interview. As Surface Forces commander, Brown also serves as the Navy’s senior surface warfare officer — also known as the “SWO Boss” — which gives him the authority to make broad changes to some operating procedures and training aboard ships.

The fleet was shaken last year by a pair of deadly collisions involving the McCain and the USS Fitzgerald that killed 17 sailors. A slew of Navy leaders — including Brown’s predecessor, Vice Adm. Thomas Rowden — were either relieved of their duties or forced into early retirement in wake of the accidents.

Manning shortages and training and certification issues were cited as being among factors that led up to the collisions.

Brown, who is based in San Diego, said the group’s commander, Capt. Rich Dromerhauser, serves as his on-the-ground representative in Yokosuka.

“He’s my avatar,” Brown said. “The same stuff I do in San Diego for the Pacific Fleet in the man, train and equip realm, he is my avatar here in Yokosuka.”

The new unit has faced some criticism from within the Navy. A Strategic Readiness Review released last year said the new group will create unnecessary “staff headquarter layers” and should be broken up, with personnel reassigned to the existing afloat-training groups or destroyer squadrons.

Retired admiral Gary Roughead, a former chief of Naval Operations who helped spearhead the report, suggested staff assigned to the group should instead be used to beef up the existing Afloat Training Group at Yokosuka.

“What we recommended was to take the people you’d put into that headquarters and put those people in a training command or a certification group,” Roughead told Stars and Stripes last month. “As soon as you build a headquarters, you already put in a bunch of overhead … we already are strapped for people, particularly people that have the skills to go out and train. Our view was put the human capital in that and then have the [unit] that was supposed to be responsible for overseeing readiness, have them figure out how they are going to do that better.”

Brown said Naval Surface Group Western Pacific is needed to make timely decisions because of the distance between the U.S. and Japan. He added that the Afloat Training Group in Yokosuka looks only at specific parts of a ship while the new group will examine ships as a whole and decide if they are ready for operations.

“We have the tyranny of distance and time zones between San Diego and Yokosuka,” Brown said. “In my view, having this group here speeds the daily operations and solving issues for ships. I’ve empowered [Dromerhauser] to make the same decisions that I would make, but he can do it in real time. We’re already seeing the benefits of being able to do that.”