Navy launches a promotion incentive to fill recruiting and other jobs 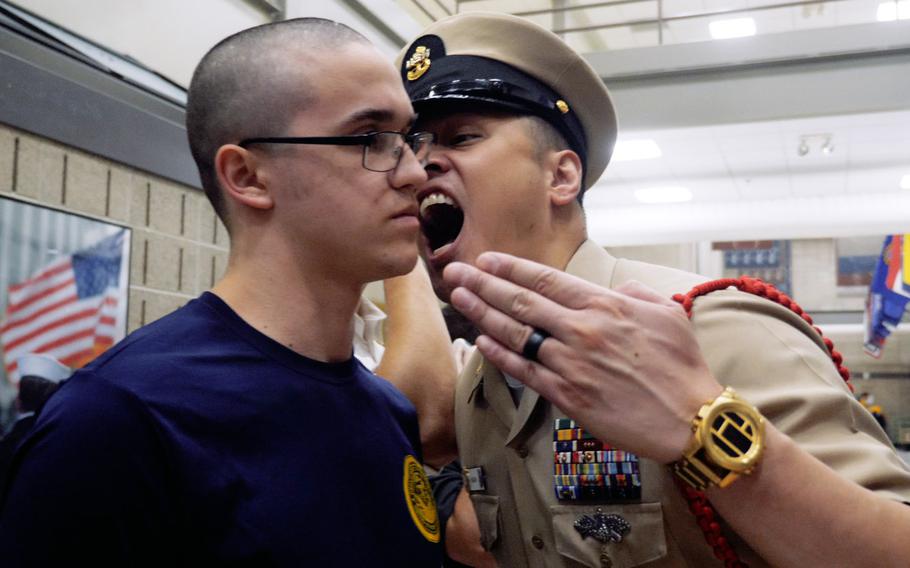 A recruit listens as the recruit division commander yells at him at the Navy's Recruit Training Command in Great Lakes, Ill. Qualified E-5 sailors willing to fill recruiting and boot camp billets now have a non-exam route for promotion. (U.S. Navy)

MANAMA, Bahrain – Sailors could qualify for alternative petty officer first class promotions if they fill recruiting and recruit training billets, under a new Navy incentive program likely to expand to other jobs.

It allows sailors in their normal window for shore duty to apply to 20 recruiting and 10 boot camp billets for the June/July 2019 application cycle. The program is open to all active duty sailors, except those in nuclear and submarine ratings, with at least six years of service and a score of 50 or higher on the March exam for petty officer first class.

To be selected, sailors must pass the normal screenings for the boot camp or recruiting jobs. Applicants will incur an additional 36-month commitment if chosen for one of the billets.

Before selection, a sailor’s final multiple score, or FMS, will be compared to all other applicants. This score includes performance evaluations, awards, pass-but-not-advance points from previous tests, education and time-in-rank points, but will not include exam scores.

“The applicant for each billet who has the highest FMS from the March 2019 advancement cycle will be selected for the program as long as they pass all special programs screening requirements,” the message said.

The incentive differs from the traditional advancement requirement that couples a sailor’s rating-dependent exam score with their final multiple score and then sifts the highest combined scores through job quotas to produce an advancement list twice a year. Sailors who fall short must repeat the process until they’re selected for promotion.

Under the advancement-to-position program, selected sailors will be advanced to petty officer first class upon completion of required schools. They will also receive permanent change of station orders.

An announcement of the incentive on some of the Navy’s Facebook pages drew hundreds of comments, including some criticism from those who saw it as advancing unprepared or underperforming sailors.

“Let’s just give more rank to those not ready,” said one commenter on a post on the Navy Advancement Center’s page that quickly drew more than 750 comments.

Still, some argued that it was a way to reward those who likely deserved more rank.

“If you’re good enough to be picked up for this program you are probably ready to advance,” another commenter said. Referring to basic training instructor jobs, the commenter added: “RDC is no joke!”

All of the basic training billets are located at Recruit Training Command Great Lakes, Ill., and any application for one of the billets will be considered an application for all of them, said the Navy’s message.

The recruiting billets will be advertised for specific priority Navy recruiting district or Navy talent acquisition group locations and applicants will only be considered for billets at the district or group to which they have applied, it said.

Applicants were encouraged to begin the screening process as soon as possible after applying for the program so that they can be eligible for other opportunities in case they fail the vetting.

The incentives will also be expanded in the coming months, the message said, “both in terms of jobs and number of billets.”