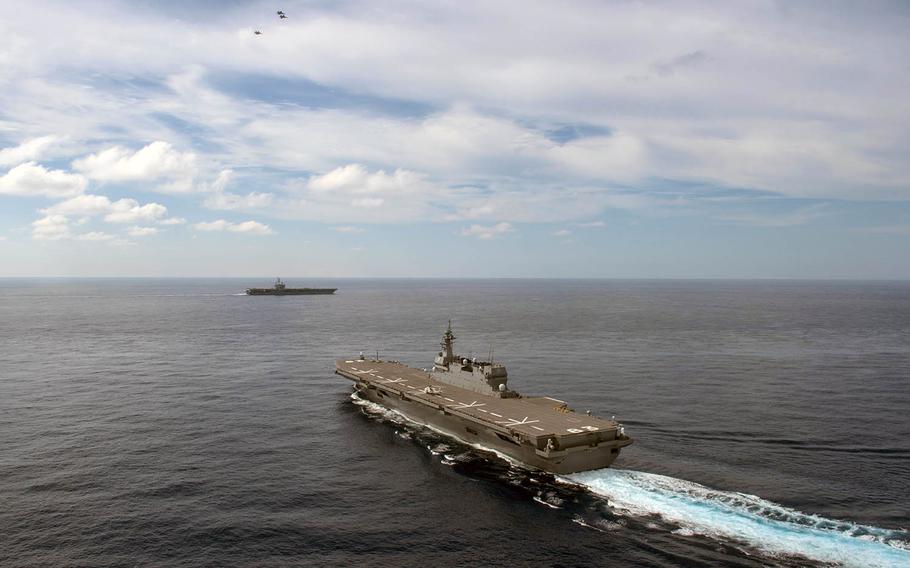 YOKOSUKA NAVAL BASE, Japan — U.S. sailors have joined forces with Japan’s Maritime Self-Defense Force and the United Kingdom’s Royal Navy for the first time during a submarine-hunting exercise in the Philippine Sea.

The opportunity for the two-day trilateral exercise, which was expected to wrap up Saturday, surfaced following the completion of a nine-month deployment by the Royal Navy’s oldest serving frigate, HMS Argyll, according to a Navy statement Thursday.

Alongside the Argyll, the JMSDF helicopter destroyer JS Izumo and a Navy submarine are also taking part in the anti-submarine warfare exercise Submarine Group 7 commander Rear Adm. James Pitts said in the statement.

A Navy P-8A maritime patrol aircraft from the Florida-based Patrol Squadron 16 also participated in the drills.

“This exercise provided an unprecedented opportunity to work together in support of a free and open Indo-Pacific,” Pitts said. “Working together to learn more about our systems and processes helps us cooperate more effectively at sea,” he said.

Chinese activity in the South and East China seas has long been an issue for nations in the region. Tokyo protested to Beijing early this year after a submarine, presumed to be Chinese, was detected near Okinawa and the disputed Senkaku Islands — an uninhabited chain surrounded by resource-rich waters between Okinawa and Taiwan — that is claimed by both countries but is administered by Japan.

While each maritime service is accustomed to operating together in multilateral exercises like Rim of the Pacific, this is the first trilateral exercise in 7th Fleet’s operating area, according to the statement.

The commitment by each force to improve maritime cooperation and cohesion spurs from a 2016 trilateral summit at the Pentagon attended by each service chief, said Capt. Katsuyoshi Motoyama, commander of JS Izumo.

“Given the increase in maritime traffic worldwide and current events, the importance of increased collaboration and cooperation between our three highly capable and like-minded services can’t be overstated,” he said.