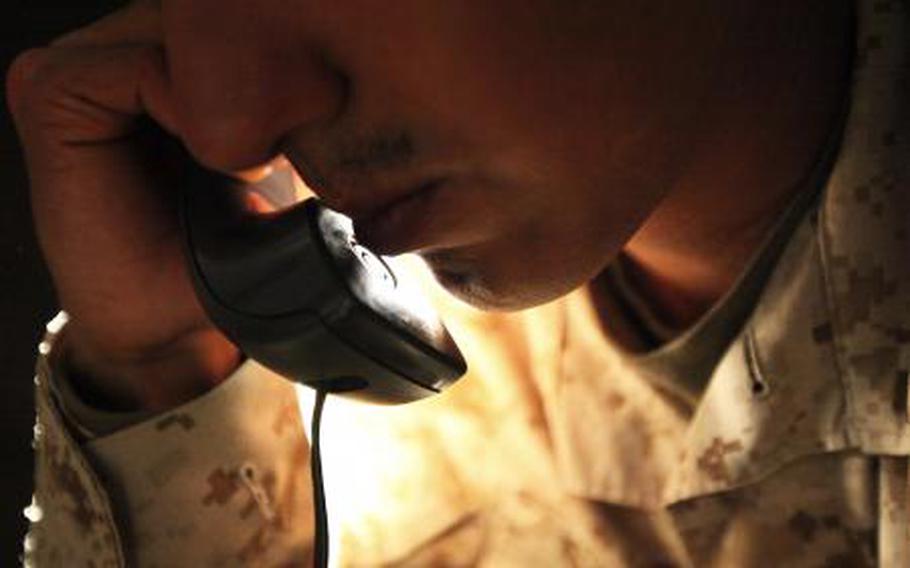 A 2010 photo illustration of a Marine using a hotline. The Navy and city of Yokosuka have set up an emergency hotline following the 2011 Great East Japan Earthquake. (Jennifer Brofer/DVIDS)

YOKOSUKA NAVAL BASE, Japan &mdash; The U.S. Navy and the city of Yokosuka have set up a direct emergency response hotline, the latest measure in a move to prevent the difficulties that stymied communication following the 2011 Great East Japan Earthquake.

Wired phone lines were jammed and cell phones were out of service after the earthquake and tsunami struck Japan on the afternoon of March 11, 2011. As a result, Navy officials had to go directly to city offices at a time when commuters began rushing home on the city&rsquo;s streets.

The hotline recently began operating in each side&rsquo;s emergency operations headquarters, according to a statement from the city of Yokosuka.

&ldquo;Because the phone is directly connected and does not use the NTT telephone switchboard, it does not get affected even if there is mass traffic, or when the NTT building is damaged,&rdquo; according to the statement.

The new line will be available for a December disaster drill that will coordinate city and Navy medical, fire, security and other disaster response capabilities.

Yokosuka Naval Base is also working to set up similar direct lines with the cities of Yokohama and Zushi, both of which include small Navy housing areas, base emergency management officer Jeff Lindaman said Friday.

&ldquo;The [emergency lines] will let us talk about any type of support they may require, and it will help get general information to the public,&rdquo; Lindaman said.

Although mutual-aid agreements have been in place for years between Japan and the U.S. military, last year&rsquo;s disaster has increased coordination efforts throughout the country. On Nov. 5, the Marine Corps signed an agreement with local governments in Okinawa to provide Japanese citizens shelter at two U.S. bases during major natural disasters. Sites at Marine Corps Air Station Futenma and Camp Foster have some of the highest ground available in Okinawa.

Along with its bilateral coordination, Yokosuka Naval Base has made efforts to communicate better with its personnel. The base recently finished installing its new &ldquo;Giant Voice&rdquo; &ndash; an upgraded, base-wide speaker system that was barely audible in several areas following the 2011 earthquake.

Personnel can also sign up for text message alerts sent to smartphones, email accounts, Twitter accounts and other information services at the base website at: http://www.cnic.navy.mil/Yokosuka/index.htm, emergency management officials said.