The USS Antietam back in port at Yokosuka Naval Base, Japan, after running aground and spilling 1,100 gallons of hydraulic oil into Tokyo Bay, Tuesday, Jan. 31, 2017. (Tyler Hlavac/Stars and Stripes)

The USS Antietam back in port at Yokosuka Naval Base, Japan, after running aground and spilling 1,100 gallons of hydraulic oil into Tokyo Bay, Tuesday, Jan. 31, 2017. (Tyler Hlavac/Stars and Stripes) A view of Tokyo Bay, where the Yokosuka-based USS Antietam ran aground and spilled 1,100 gallons of hydraulic oil, Tuesday, Jan. 31, 2017. (Tyler Hlavac/Stars and Stripes) 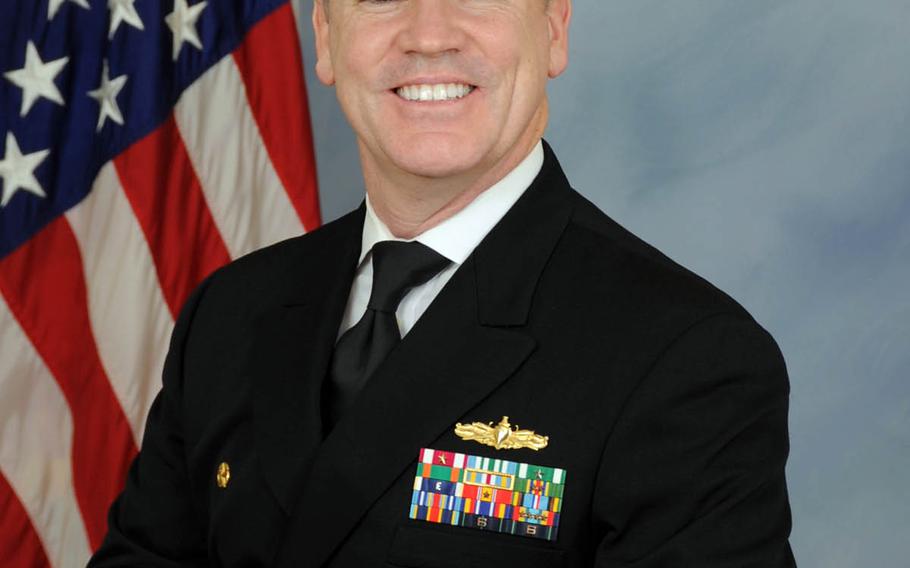 Capt. Joseph Carrigan is commander of the guided-missile cruiser USS Antietam, which leaked an estimated 1,100 gallons of hydraulic oil after running aground in Tokyo Bay, Tuesday, Jan. 31, 2017. (Courtesy of the U.S. Navy)

YOKOSUKA NAVAL BASE, Japan — Navy and Japan Coast Guard ships continued searching Yokosuka’s shoreline and waters Wednesday for signs of environmental damage, one day after the guided-missile cruiser USS Antietam ran aground on a shoal and leaked hydraulic oil.

Antietam grounded just before 11 a.m. Tuesday while anchoring near the northeast side of the base at the Ammunition Handling Anchorage Area, Naval Forces Japan officials said Wednesday.

No ammunition was being handled at the time of the incident, Naval Forces Japan spokesman Darian Wilson said.

The area is regularly used by U.S. and Japan Maritime Self-Defense Force ships for anchoring and isn’t far from the base’s piers.

Both the Navy and the Japan Coast Guard conducted surface searches for an estimated 1,100 gallons of leaked hydraulic oil Tuesday and Wednesday.

On each day, Navy searches “turned up negative, with no oil visible in the water or on the shoreline,” Wilson said.

Whether hydraulic oil floats on water depends on the depth of discharge, currents and other conditions, officials said.

A Navy vessel will continue searching for signs of oil, Wilson said.

Tug boats pulled Antietam back into the pier on Tuesday, though they weren’t needed to pull the cruiser off the shoal where it grounded, Wilson said.

The propeller will need repair before Antietam can resume normal operations in the Asia-Pacific region.

Antietam is among 13 ships homeported at Yokosuka and one of at least seven equipped for intercepting ballistic missiles. Such ships typically operate at a high tempo and would be a critical part of defense if North Korea ever launched ballistic missiles at the U.S. or an ally.

Similar ships based on the U.S. West Coast also routinely patrol the Asia-Pacific region based on operational needs.

The Japan Coast Guard was initially notified Tuesday that Antietam had leaked oil because of engine trouble, a spokesman said. Navy officials could not confirm on Wednesday whether an engine malfunction occurred.

Navy officials declined to speculate on what led to the accident. A Navy investigating officer will have one month to determine the cause.

The spot where Antietam was anchoring can be treacherous while dealing with high winds and waves, sailors at Yokosuka have told Stars and Stripes. However, it is normally wide and deep enough to keep large ships off the bay’s shoals.

A high wind warning was in effect through 11 a.m. Tuesday, but winds did not appear particularly strong from the nearby shore that morning.

A Japan Coast Guard spokesman could not immediately confirm wind speed at 11 a.m. Tuesday, but a noon reading from the bay measured light winds at 10 mph, which wouldn’t normally affect a cruiser without other contributing factors.