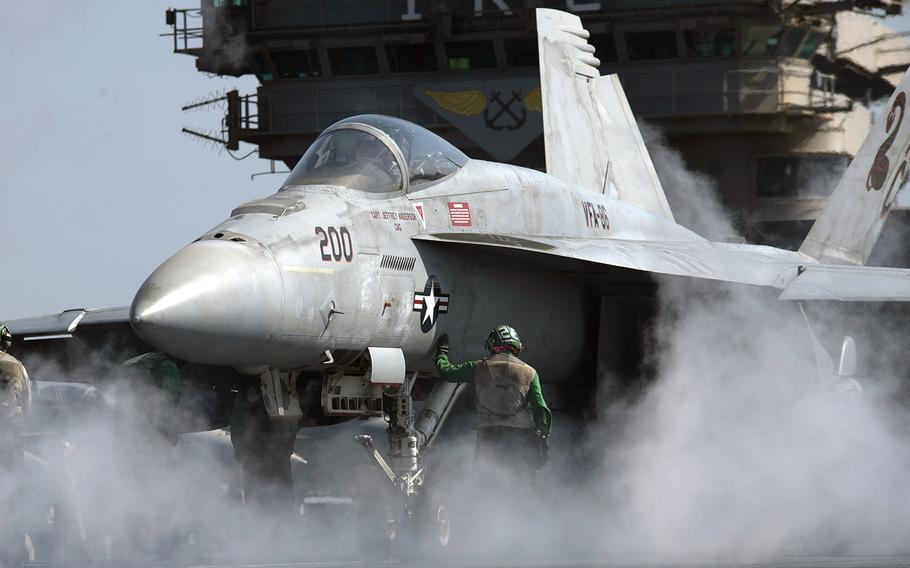 In an October, 2016 file photo, an F/A-18E Super Hornet undergoes preflight checks prior to launching from the flight deck of the aircraft carrier USS Dwight D. Eisenhower in the Persian Gulf. (Christopher A. Michaels/U.S. Navy)

WASHINGTON – An Iranian drone flew within 100 feet of a U.S. Navy fighter jet Tuesday over the Persian Gulf, forcing the F/A-18E Super Hornet to change directions to avoid collision, the Navy said.

The Iranian QOM-1 drone executed “dangerous” altitude changes over international waters as the Super Hornet was preparing to land on the aircraft carrier USS Nimitz in the central Persian Gulf, according to a U.S. Naval Forces Central statement. The Navy deemed the interaction unsafe and unprofessional.

The drone ignored repeated radio calls for air traffic in the area to stay clear of active flight operations around the Nimitz, according to the statement.

“The dangerous maneuver by the QOM-1 in the known vicinity of fixed wing flight operations … created a collision hazard and is not in keeping with international maritime customs and laws,” the statement read.

The drone was not armed, a defense official said.

Interactions with Iranian aircraft and vessels are not uncommon in the Persian Gulf region, and Tuesday’s incident was the 13th unsafe or unprofessional interaction between American and Iranian forces this year, according to the statement.

Last month, sailors aboard the USS Thunderbolt, a Cyclone-class patrol ship, fired warning shots near an Iranian Revolutionary Guard Corps military boat when it sped within 150 yards of the U.S. ship in the northern Persian Gulf.

That was the second time this year that a U.S ship fired warning shots at an Iranian vessel in the Persian Gulf.

In January, the USS Mahon fired warning shots as four Revolutionary Guard boats approached the guided-missile destroyer at a high rate of speed in the southern Persian Gulf. Both of those incidents were deemed unsafe and unprofessional, Navy officials said.