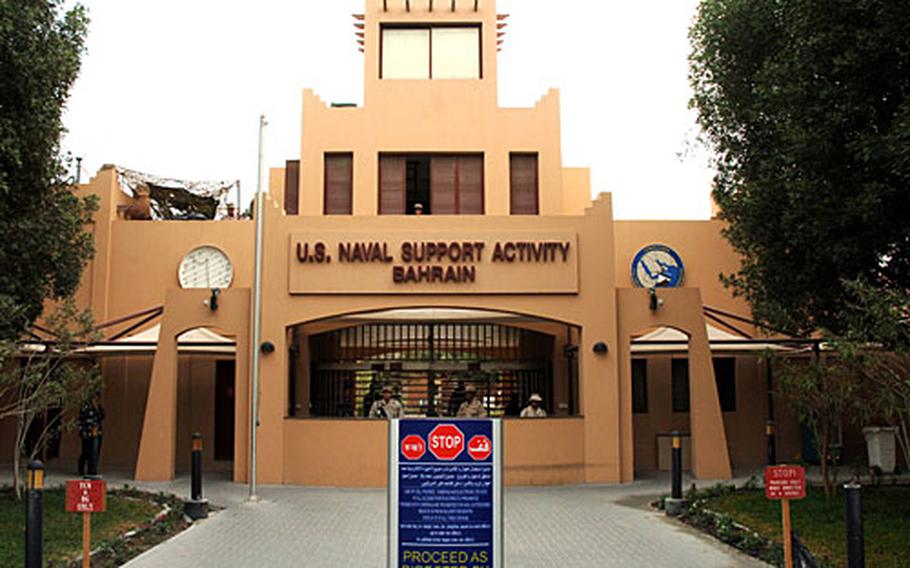 Naval Support Activity Bahrain was locked down for an hour Monday morning. (Courtesy of the U.S. Navy)

MANAMA, Bahrain &#8212; A sailor shot and killed his former girlfriend and her roommate before shooting himself early Monday in the barracks of the U.S. military base in Bahrain, base sources said.

The sources, who are familiar with some of the details of the incident but spoke on condition of anonymity, said the shooter was critically injured while trying to commit suicide and was taken to a local hospital.

All three were members of the Naval Support Activity Bahrain security forces detachment, a Navy official said on condition of anonymity.

The incident is alleged to have stemmed from a tumultuous romantic relationship the shooter had with one of the victims, sources said.

He had threatened her in the past, and was ordered to stay away from her, they said. What exactly led him to go to the barracks to allegedly shoot her and her roommate is not known.

The Navy would not confirm many of the details of the incident because it is under investigation but stressed the shootings were not terror-related and not the result of someone who broke into the base.

Initial indications are the three sailors were acquainted, but the extent of their relationships and the details of the shootings are still under investigation, officials said.

The names of the three sailors were being withheld Monday pending notification of their families.

The shooting took place around 5 a.m. local time on Monday on the fourth floor of the barracks, which houses both visiting military personnel and junior enlisted sailors. The two victims were pronounced dead at the scene. Base officials locked down the base for about an hour and did not allow people to come on or go off base.

Navy investigators evacuated the building and sealed it off for several hours.

The barracks is less than 50 yards from the Freedom Souq, a popular shopping and recreation area where military personnel stationed on base or passing through come to eat, shop or hang out. The complex, which opened last year, includes a Navy Exchange, movie theater, food court, fitness center and barber shop.

Some sailors found out about the shootings through their unit, but others said they found out through friends or the Internet.

Coast Guard Petty Officer 2nd Class Mike Snowdon, who is stationed at the base, said he heard about the shootings after getting a text message on his phone. He said the incident is tragic but not a surprise because similar shootings have happened everywhere, from college campuses to public malls.

Sailors living in the barracks were initially evacuated to the nearby gymnasium. At around 2 p.m., the base made an announcement over the Freedom Souq&#8217;s public address system that local personnel on the first floor of the barracks could return to their room but use only the main entrance.

Security forces cut off Internet access and public Wi-Fi hot spots on base because of the shooting.

Military chaplains offered support for those emotionally shaken by the shootings and were available to console anyone who knew the sailors.

Navy security forces sailors could be seen posted at the entrances to the four-story barracks as investigators tried to piece together what happened.

But, for the most part, it appeared to be business as usual as people went about their day passing by the barracks and extra security.

This small island nation in the Persian Gulf is host to the Navy&#8217;s 5th Fleet, which oversees all Navy and Marine Corps personnel in the Middle East and Northern Africa region ashore and on ships. The base has more than 3,000 people and is one of the Navy&#8217;s most important bases in the region.

Security is extremely tight in and around the installation, and photography is prohibited without an approved request from base officials.