Navy investigates after Bible was included in Okinawa POW/MIA display An infographic from a 2014 Naval History and Heritage Command article shows the Bible as an official part of POW/MIA "Missing Man" table displays. (Courtesy of the U.S. Navy)

An infographic from a 2014 Naval History and Heritage Command article shows the Bible as an official part of POW/MIA "Missing Man" table displays. (Courtesy of the U.S. Navy) 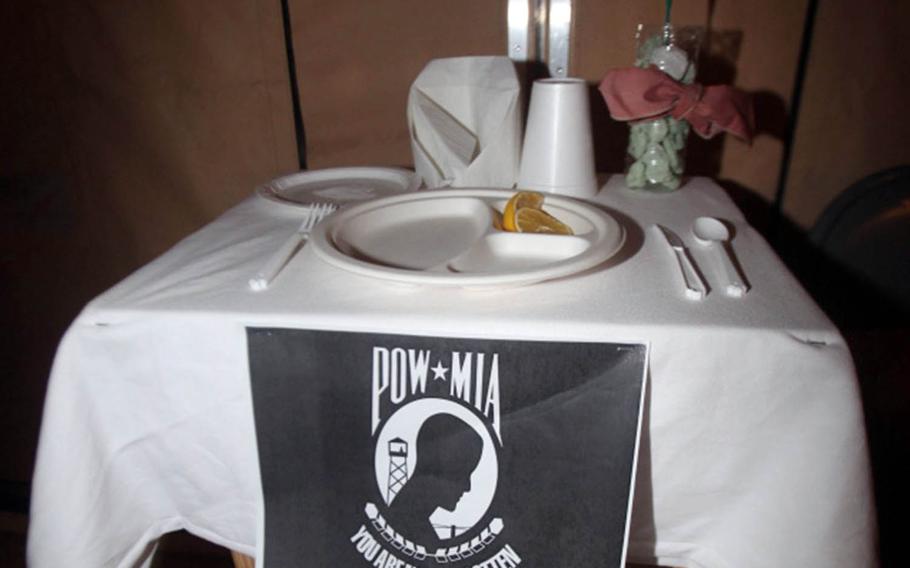 CAMP FOSTER, Okinawa — The Navy has launched an investigation after a Bible was included in a POW/MIA “Missing Man” table display at U.S. Naval Hospital Okinawa.

Officials were first alerted to the issue Thursday evening, when a complaint was received from the New York-based Law Office of Donald Rehkopf Jr. on behalf of the Military Religious Freedom Foundation and 26 families on Okinawa. It was addressed to Rear Adm. Paul Pearigen, Navy Medicine West commander.

It also demands an independent investigation into who put up the display and disciplinary measures for those responsible.

“Please be advised that we are investigating the matter now,” Navy Medicine West paralegal specialist David Ostrander wrote in an email to Rehkopf Friday. “More information to follow.”

The row over the display began when a group of sailors, Marines and Department of Defense civilian employees stationed on the island reached out to MRFF founder and president Mikey Weinstein asking his nonprofit — which is dedicated to safeguarding servicemembers’ constitutional right to religious freedom — for help in getting the holy book removed from the display.

Weinstein, a former Air Force judge advocate general and Reagan administration lawyer, contacted hospital officials early last week and asked them to take away the religious items. He said a Navy JAG assigned to the hospital refused to do so without permission from the hospital commander, Capt. Cynthia Kuehner, who is away on temporary duty assignment.

MRFF lawyers then sent a complaint to Pearigen, and intend to file a third-party inspector general complaint and potentially a federal lawsuit if the issue is not resolved.

The complaint cites the First Amendment’s Establishment Clause, which “not only forbids the government from establishing an official religion, but also prohibits government actions that unduly favor one religion over another,” according to a Cornell Law School legal dictionary.

“We’re pleased the Navy moved so quickly to investigate,” said Weinstein before calling Okinawa’s command climate “toxic and poisonous” because servicemembers and DOD civilians do not feel comfortable reporting such issues to their chain of command.

Weinstein vowed not to back down, though he has been inundated with sexually explicit, homophobic, anti-Semitic and violent threats, which he shared with Stars and Stripes.

“Not all POWs are Christian,” he said. “This is America. We are a representative, secular democracy … the Constitution is worth standing up for.”

The official Navy or Defense Department stance on Bibles being included in POW/MIA “Missing Man” table displays remains unclear. A report on the Navy’s website from 2014 describes the Bible as being an official part of the display; however, a photo of a table that accompanies the article does not have a Bible in it.

A web search of photographs from military photographers of the displays showed that most of the displays around the world, from Afghanistan to Cuba, do not include a Bible. The ones that did were generally from private organizations, such as a 2014 remembrance ceremony at Pima Air and Space Museum in Arizona, though that ceremony included an honor guard from Davis-Monthan Air Force Base.

The fight to remove religious articles from POW/MIA “Missing Man” tables is not new for MRFF. The group has been successful in several other cases, the latest in November when it forced the Denver VA Medical Center to remove religious items from a display.