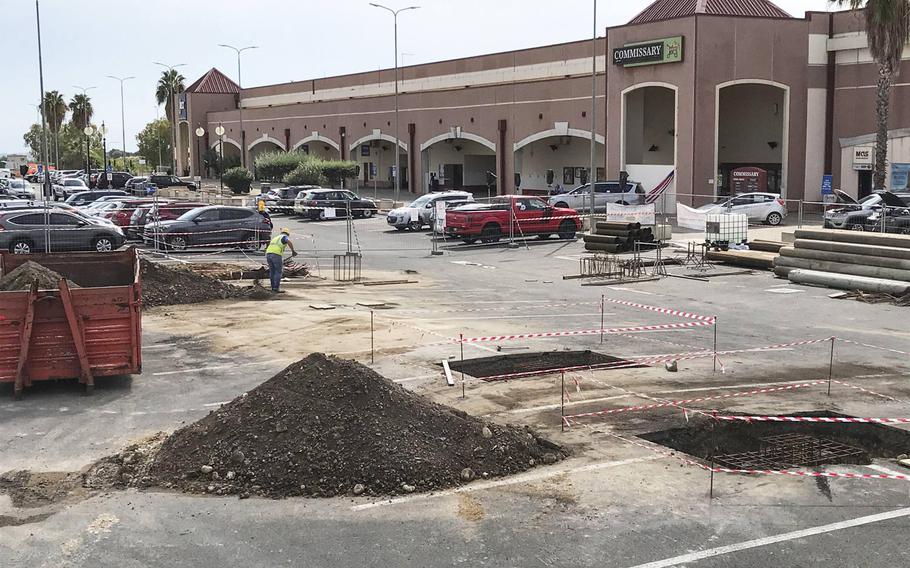 Crews work to install a solar energy system at Naval Air Station Sigonella in Sicily on Oct. 3, 2019. The system is part of a multimillion dollar project to increase energy security and efficiency at U.S. naval bases in Europe. (Josh Cote/U.S. Navy)

NAPLES, Italy — The Navy’s three biggest bases in Europe are undergoing a multimillion dollar retrofit to boost energy efficiency and create alternative power sources in case the main grid is disabled by an adversary, natural disaster or storm.

Solar farms are being installed, and central air systems, heating, boilers, lighting and other equipment upgraded or replaced at bases in Naples and Sigonella in Italy, and Rota in Spain, under the energy resiliency and savings project, the Navy said.

“If there’s a storm that knocks something out, you want to make sure you have those opportunities so the mission can keep going,” said Brittany Roark, who’s managing the contract for the Navy’s public works department in Naples.

Under the project, a 14-acre solar farm that will generate six megawatts of electricity a year is being built at Rota, and another, which will produce 4.5 megawatts of power annually, will be installed at Sigonella. Six megawatts is enough to power about 900 American homes for a year, according to a formula used by the Union of Concerned Scientists.

A new natural gas pipe in Naples will create a mini-plant that will generate one megawatt of energy yearly, and will be used to heat and cool water for the base’s central air systems.

Crews will also install 13,000 LEDs in Sigonella and 9,000 in Naples to replace less energy-efficient light bulbs.

“Our installations are focused on increasing energy efficiency, providing renewable and sustainable energy, and promoting energy resiliency ,” regional command spokesman Lt. Cmdr. Ed Early said in an email. “The energy projects at Naples, Sigonella and Rota clearly demonstrate our commitment to achieve these goals and enhance shore energy security throughout the region.”

The Navy will pay Siemens, the contractor on the project, $82.5 million after construction work is finished on all three bases, and yearly fees to maintain the equipment or replace parts that break or wear out, Roark said. The cost of the project will be around $218 million spread over 25 years.

Meters will monitor how effective the equipment upgrades are at reducing power consumption and whether the solar and natural gas systems are producing the agreed-upon amount of electricity, Roark said.

If the results fall short, the Navy will withhold part of Siemens’ annual payment, she said.

“Each year they have to prove to us it’s still working and that it is still as efficient as they promised it would be,” Roark said.

The Pentagon has been pushing for military bases to improve their power consumption, including by shifting to greater use of renewable energy. Military and congressional leaders have called for installations to make changes that will allow them to better withstand the effects of climate change, such as rising sea tides, wildfires and increasingly frequent severe storms.

Once completed, the installations are expected to bring energy savings of $6.5 million the first year, with those savings expected to increase over time.

The project is part of a larger program run by the Energy Department that has been around for decades but has become more popular in recent years, largely because there are no upfront costs, which allows contractors to offer energy-saving equipment and ideas immediately, Roark said.