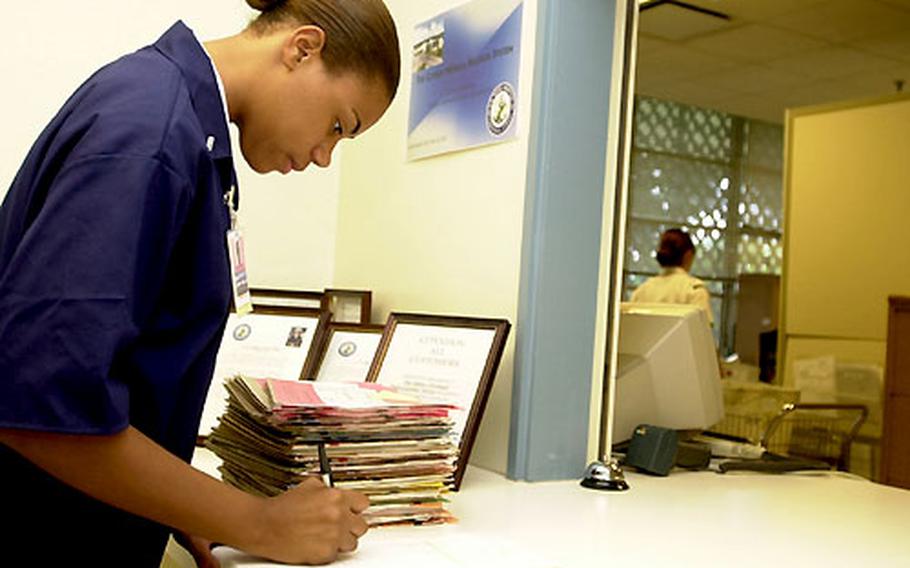 CAMP LESTER, Okinawa &#8212; In the wake of too many lost or misplaced medical records, all Navy hospitals and clinics are moving to a closed-record system: Patients no longer will be permitted to hand-carry their medical records.

Kadena Air Base&#8217;s 18th Medical Group is planning to join the closed record program, Browning said, because many of its patients also are seen at the hospital.

Browning said the system now is mandatory in all Navy hospitals and clinics, not just Okinawa. Recent inspector general visits, she said, found some other commands &#8220;didn&#8217;t know where all their records were &#8230; there was no tracking.

The closed-records rule applies to all patients, whether active duty, retired or a family member, she said. It applies to the facility at which a patient is treated and includes all care referred to non-military facilities.

Browning said patients either will be given copies of pertinent information or copies of their entire medical records to take to appointments in non-military medical facilities.

Under the old system, she said, if a patient showed up without his or her record, the clinic could decide whether to treat that patient. Now she said, the clinic no longer has that option; the hospital is responsible for ensuring the record is there.

But Petty Officer 3rd Class Nicholas Mejia, temporarily assigned to the hospital while receiving medical treatment, had a different experience.

&#8220;I don&#8217;t like it because my record has been lost,&#8221; he said. It was returned eventually, he said, but not until the hospital had made him a new one. The original record, Mejia said, had been mislabeled and sent out to a ship.

Under the new rules, the only time a patient will be permitted to hand-carry a medical record is when making a permanent change of station move, Browning said.