Santa greets the children at the Airin-en Orphanage in Naha Saturday. The gifts Santa handed out were purchased and collected by the staff of the U.S. Naval Hospital Okinawa. (Fred Zimmerman / S&S)

Santa greets the children at the Airin-en Orphanage in Naha Saturday. The gifts Santa handed out were purchased and collected by the staff of the U.S. Naval Hospital Okinawa. (Fred Zimmerman / S&S) 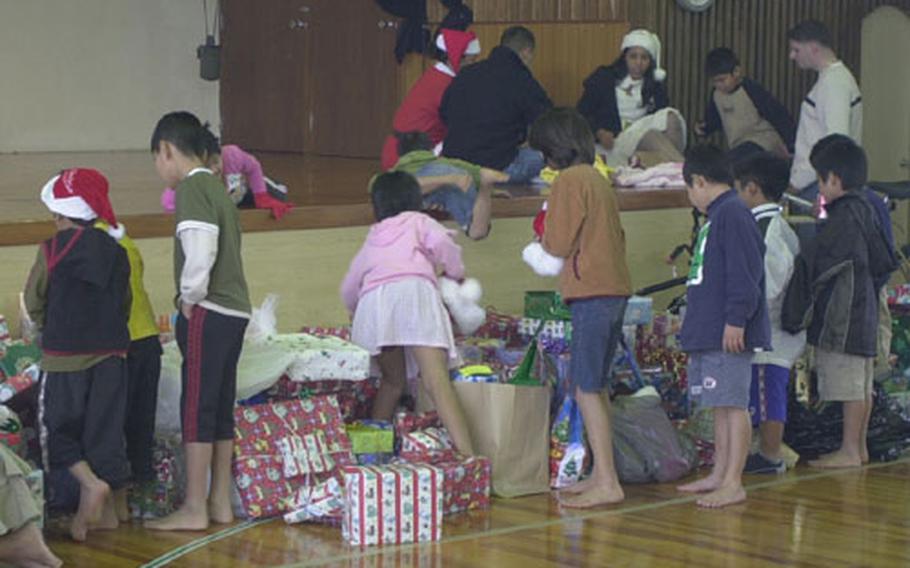 Children at the Airin-en Orphanage look for their gifts in the sea of presents Saturday. The staff from the U.S. Naval Hospital Okinawa spent several hours with the children — singing carols, entertaining them with a magic show and having a cookout for lunch. (Fred Zimmerman / S&S)

The Junior Enlisted Association, Chaplain&#8217;s Office and the hospital&#8217;s Special Care Unit bought and collected enough toys to give two or three gifts to each of the 90 children.

Fernandez said each tag on the tree had the child&#8217;s name, age and sex to help in the present selection.

Special Care Unit members began putting together an office party with a gift exchange, but then altered their plans.

&#8220;Our civilian nurse, Toni Thrasher, recommended that we either adopt a family or an orphanage,&#8221; said Navy Lt. Dante Villecco, the SCU&#8217;s assistant division officer. &#8220;We figured it&#8217;s better to fund an orphanage rather than give to each other because we are already so blessed. The spirit of Christmas is to give to those that need, and that&#8217;s what we did.&#8221;

Villecco said Thrasher and Seaman Melissa Rivera put considerable work into the project, which collected toys and money. They found out about the orphanage, put e-mails out asking for donations, got a list of all the children and bought and wrapped all the gifts.

On Saturday, the sailors, volunteers and family members loaded the toys into vans and a bus for the 45-minute trip to the orphanage. Once there, they sang Christmas carols to the children, entertained them with music and a magic show, and cooked up hamburgers and hot dogs for lunch.

Afterward, the children gathered in front of the heaping pile of gifts, waiting to receive them. They got another surprise, though, when Santa walked into the gym. He sat down and called out the children one by one to receive their gifts.

Kimie Tamahara, a care worker at the orphanage, said the children, who range in age from 16 months to 18 years old, were looking forward to the visit.

Fernandez said the JEA has adopted the orphanage and the organization is planning more trips there after the new year.