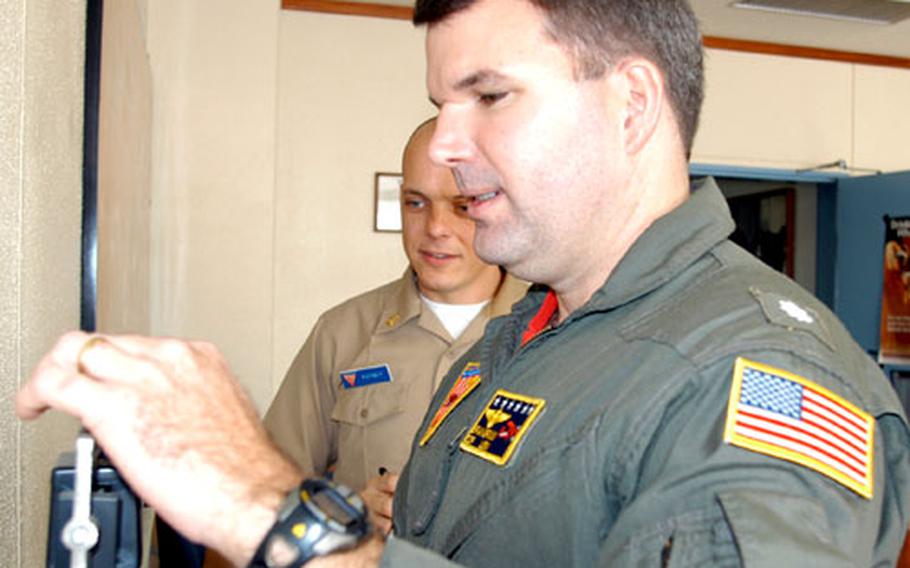 NAVAL AIR FACILITY MISAWA, Japan &#8212; The holidays are over, but the extra pounds that crept on aren&#8217;t creeping off.

The Navy at Misawa is offering sailors an incentive to lose those pesky love handles in time for the next Physical Readiness Test and mandatory weigh-in this May.

Modeled on the weight-loss reality show &#8220;The Biggest Loser,&#8221; the Navy&#8217;s contest will reward the person who loses the highest percentage of body weight. Weekly weigh-ins will take place over 13 weeks. At the halfway point, the person who&#8217;s burned the most calories will win three days of leave. And at contest&#8217;s end, another three days of leave plus a free rock-climbing lesson goes to the &#8220;biggest loser,&#8221; said Chief Petty Officer Ken Putney, NAF Misawa&#8217;s operations department chief and command fitness leader.

&#8220;It&#8217;s a little motivation after the holidays,&#8221; said Cmdr. Brian Grimm, NAF Misawa executive officer. &#8220;It gets people back into good physical conditioning and watching proper nutrition again, because we probably all overindulged during the holidays.&#8221;

After stepping on the scale Monday morning for his first official weigh-in, Petty Officer 1st Class Glenn Friedlander said his goal was to lose at least 30 pounds. An aircraft handler, Friedlander said he put on some pounds since the Navy&#8217;s last biannual fitness test.

While officials said healthy exercise and eating habits that persist long after Navy careers have ended is the ultimate contest goal, the Navy also wants its fleet trim and fit. Sailors who don&#8217;t fit that description risk being sent home earlier as part of stricter fitness policy enforcement. Starting in July, commanding officials will be required to separate sailors who have failed three Physical Fitness Assessments in four years if they&#8217;re not progressing, Putney said.

In recent years, the Navy also has tightened height and weight standards, meaning more sailors must get their body fat measured. Sailors who fall outside their allowable weight with a body fat percentage greater than 23 percent land in a mandatory weight-loss program that at NAF Misawa includes aerobics and other physical conditioning three days a week.

Though Putney and Grimm appear fit, both are participating in the weight-loss challenge.

His game plan is to exercise five days a week and cut calories.

Joining them will be NAF Misawa commander Capt. Wayne Radloff, who also stepped on the scale Monday morning.

&#8220;The message is the Navy is serious about physical fitness,&#8221; he said, noting that in the last two months, two Misawa sailors were discharged for not meeting Navy fitness standards.