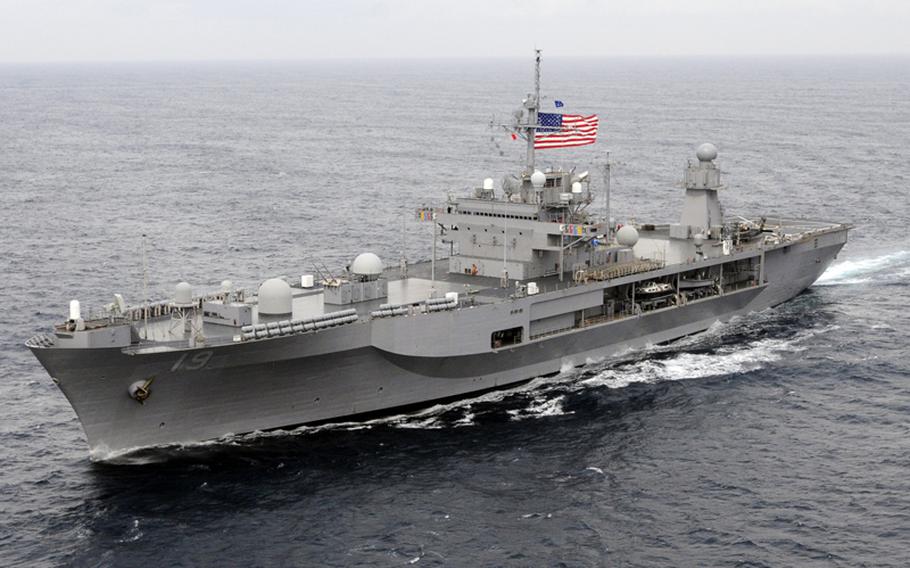 YOKOSUKA NAVAL BASE, Japan &mdash; Like some of the senior sailors who walk its deckplates, the USS Blue Ridge did a little weightlifting recently to stave off the physical decline that sometimes comes with getting older.

Machines stacked tons of varying weights aboard each side of the 7th Fleet command ship at a Yokosuka drydock, while a survey team collected data that could help the ship remain on active duty well after its current crewmembers call it a day.

The Blue Ridge is now scheduled to keep sailing through 2039, 70 years after it launched from Philadelphia and decades beyond its original retirement date.

It is an unprecedented lifespan for a ship of its caliber in the modern Navy.

It is also doable, Navy officials say, with the proper maintenance &mdash; something top admirals have conceded that the service did a subpar job of ensuring for decades.

Navy officials say the qualitative problems plaguing ship maintenance have been addressed, but analysts are split over whether the funding that maintenance is receiving is enough to keep the service dominant in hot spots like the Pacific waters, where territorial squabbles and China&rsquo;s growing military might have U.S. allies in the region concerned.

During the last two years, 24 percent of the 59 ships reviewed by the Navy Board of Inspection and Survey were given marks of either &ldquo;degraded&rdquo; or &ldquo;unsatisfactory.&rdquo; The Navy did not respond to numerous requests for the data cited in the Navy review.

Those deficiencies are the product of a long record of risky maintenance policy, said Peter Daly, a retired vice admiral who left the service in 2011 as deputy commander of the U.S. Fleet Forces Command. Daly, now CEO of the U.S. Naval Institute, said surface ship maintenance has been underfunded for at least 20 years.

In the 1990s and 2000s, the Navy had removed so much money and so many workers from repair facilities and ships that their maintenance data was incomplete, leading service officials to believe that ships were better off than they were, which led to further maintenance budget cuts.

The systematic flaws were identified by 2008, Daly said. The Navy commissioned a panel led by retired Vice Adm. Phillip Balisle to study the budgetary and manning problems, which were detailed in a 2010 report.

Daly, echoing Navy leaders who testified before Congress last year, said that more sea billets and better inspections provided in the past few years have fixed the maintenance process. In the short term, that means inspections are likely to find more unfit ships.

&ldquo;We are not good to go,&rdquo; McCoy said.

Even with better methods in place, the budget picture remains murky.

The 2013 budget sent to Congress by the president would increase ship maintenance spending by 12 percent, to about $5.1 billion, excluding ship depot funding. The bump means that 43 ships are scheduled to undergo some type of maintenance period in 2013, up from 23 in 2012, but far fewer than the 86 serviced in 2011.

&ldquo;The Navy&rsquo;s been stressed past the breaking point for the past four years,&rdquo; said Eaglen, a staff member on the 2010 Quadrennial Defense Review Independent Panel. Poor fleet readiness statistics &ldquo;aren&rsquo;t going to change much because the budget needle didn&rsquo;t move enough.&rdquo;

The 2013 budget was crafted before the president&rsquo;s Jan. 5 strategic guidance outlining the Pentagon&rsquo;s new emphasis on the Asia-Pacific region.

&ldquo;Subsequent budgets could be expected to show relatively greater future investments in capabilities needed in the Asia-Pacific region,&rdquo; said Jan van Tol, a retired captain who commanded the USS Essex in Japan and is now a senior fellow at the Center for Strategic and Budgetary Assessments.

Increased movements and operations in Asia would also require maintenance budget increases. That could ultimately benefit the Blue Ridge, which Navy engineers acknowledge needs a lot of work to keep sailing, even if operations stay at their current level.

A 2011 Navy plan would place the Blue Ridge in nine- to 12-week maintenance periods annually through 2026, at an average cost of $6.9 million each year.

Before much of that work begins, the engineers need to know whether the ship is imbalanced, which is why they stacked all of those weights on the ship&rsquo;s deck. An imbalance can leave a ship listing dangerously in rough seas.

&ldquo;The ship has been around [40-plus] years now,&rdquo; said Lt. Jerry Belmonte, the ship&rsquo;s damage control assistant. &ldquo;A lot of additions and equipment have possibly offset the center of gravity of the ship. For us to get an expanded lifespan, we need to know where the new center of gravity is.&rdquo;

The Blue Ridge&rsquo;s hull is in good shape, according to engineering surveys. If the ship receives periodic system upgrades and proper inspections continue, the ship should be able to sail through 2039, Daly said.

However, some doubt remains as to whether the money to maintain the Blue Ridge and other long-in-the-tooth ships will be there in the future, as lawmakers continue attempts to curtail federal spending.

&ldquo;The thing that keeps me up at night is whether [Congress] will come back to defense again and break the military capability that we need for the nation,&rdquo; Daly said.

Even if the Blue Ridge gets the money that engineers anticipate it will need, it may need more if the Navy pushes it too hard, as it has been doing to multiple ships in the fleet.

In July, McCoy warned that the Navy&rsquo;s operations tempo, where ships average about 40 percent of their time on deployment, was unsustainable.

The Blue Ridge spent 28 percent of 2011 engaged in operations and 40 percent of the year at sea or otherwise away from its homeport, according to Navy figures.

Van Tol mainly attributes the higher overall tempo to commitments in Central Command, which includes the Middle East and Horn of Africa.

However, van Tol said that operational demands on the 7th Fleet could increase if China returns to the pattern of belligerent behavior it displayed in 2010, which included incidents at sea with U.S. ships and disputes over territory with U.S. allies.

&ldquo;There is certainly a current tension between increased commitments globally and the need to do recurrent maintenance,&rdquo; van Tol said. &ldquo;As material problems accumulate or are allowed to get worse, the cost of fixing them increases, so it&rsquo;s a classic case of, &lsquo;Pay me now, or pay me later.&rsquo;