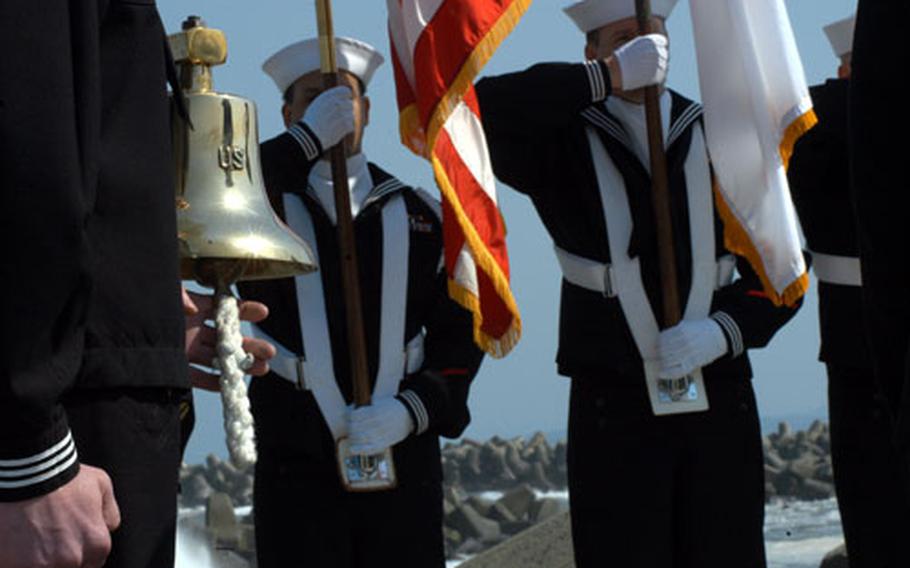 A bell was rung twice at the reading of the names of 31 servicemembers killed when their EC-121 aircraft was shot down April 15, 1969, over the Sea of Japan. Navy Information Operations Command Misawa honored the 30 fallen sailors and one Marine at a two-bell ceremony Tuesday afternoon at the Misawa Fish Port. (Jennifer H. Svan / S&S)

MISAWA, Japan &#8212; The wreath of flowers quickly broke apart after being tossed into the foaming tide.

Chief Petty Officer Erin Piazza and Petty Officer 1st Class Jason Rico watched for a moment from the pier Tuesday while dodging the spray of waves at the Misawa Fish Port. They had volunteered to throw the wreath, part of a Navy Information Operations Command time-honored tradition at Misawa. &#8220;We do the same job that these guys did when they lost their lives,&#8221; Piazza said. &#8220;It&#8217;s really close to our hearts.&#8221;

NIOC Misawa (formerly Naval Security Group Activity Misawa) for more than 30 years has honored the memory of 30 sailors and one Marine shot down aboard a Navy EC-121 aircraft April 15, 1969. Most of those killed were from Fleet Air Reconnaissance Squadron One, or VQ-1, from Naval Air Facility Atsugi near Tokyo. But eight were from NSGA Kamiseya, which moved to Misawa in 1971.

As Capt. Peter Rush, Naval Air Facility Misawa commander, noted in remarks Tuesday, much mystery still shrouds the incident. What&#8217;s known is that two North Korean MiGs shot down the unarmed reconnaissance plane over international waters. The plane sits at the bottom of the Sea of Japan.

NIOC provides the cryptologic manning for the EP-3 Aries aircraft, the air frame that followed the EC-121, according to Schulz.

Petty Officer 1st Class Justin Stauffer spent more than three weeks organizing the seaside ceremony. The event is held every year to remember sacrifice and &#8220;to remind us there&#8217;s inherent danger in everything that we do,&#8221; he said.