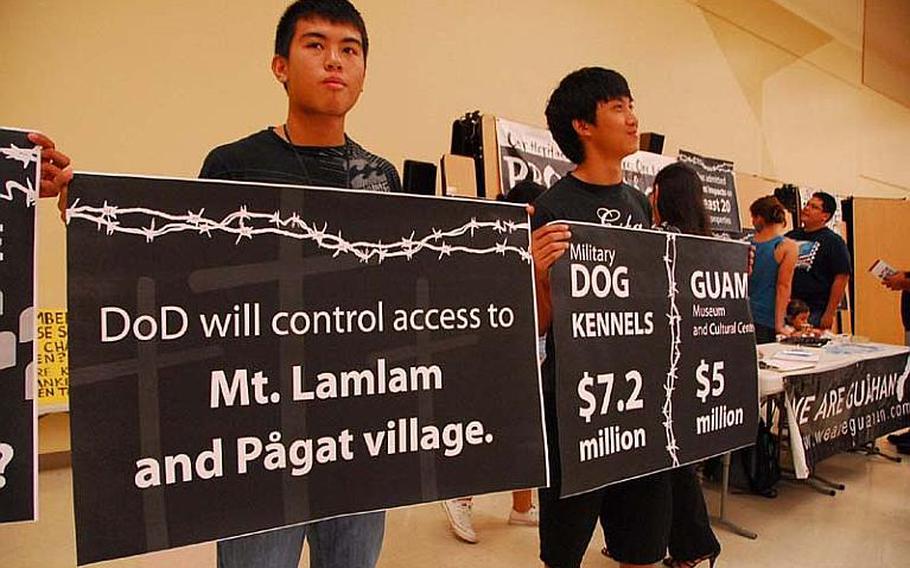 Members of the group We Are Guahan hold protest signs during a Navy-sponsored public meeting on plans to build firing ranges on Guam ancestral land. (Travis J. Tritten/Stars and Stripes)

Members of the group We Are Guahan hold protest signs during a Navy-sponsored public meeting on plans to build firing ranges on Guam ancestral land. (Travis J. Tritten/Stars and Stripes) 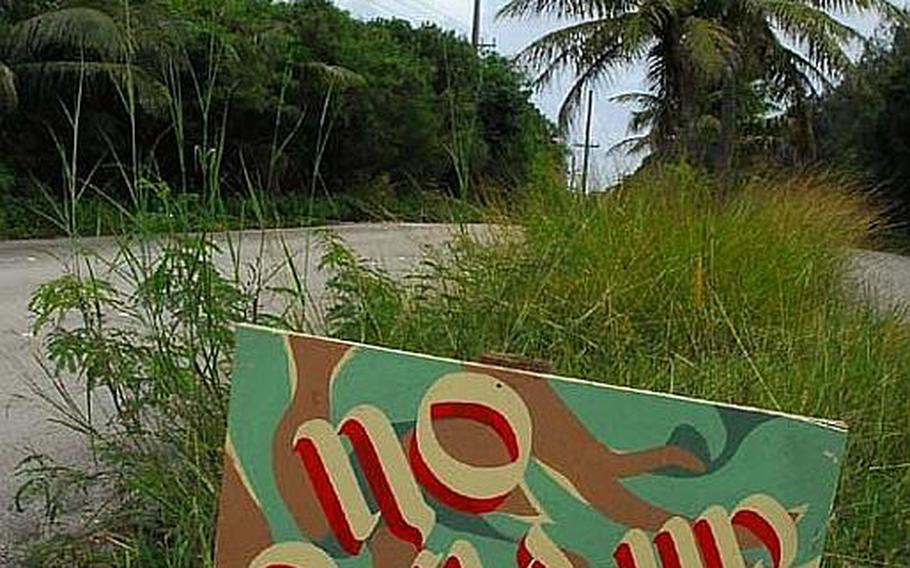 A sign protesting the military buildup is posted near Guam ancestral land that might be used for Marine Corps firing ranges. (Travis J. Tritten/Stars and Stripes) 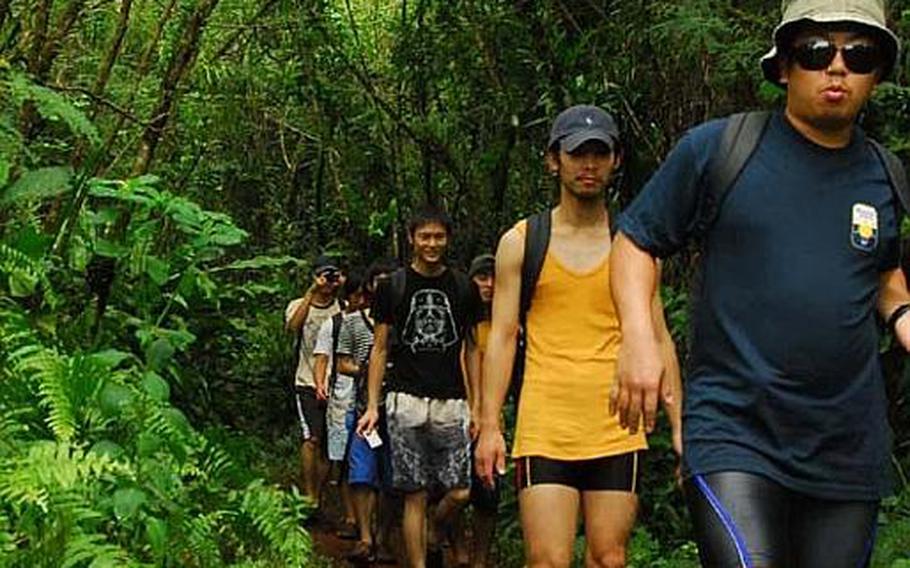 At the open house, held at a local high school, Navy officials said the live-fire ranges could be built with minimal damage to the land that has archaeological importance with its ancient graves and medicinal plants used by the indigenous Chamorro people.

The fate of that land is tied up in negotiations between the Guam historic preservation office and the U.S. Defense Department. They are trying to work out an agreement on how to deal with such historic sites during a U.S. military buildup on the island. The controversy over the ancestral land known as Pagat has become a main friction point in the U.S. military&rsquo;s plan to relocate 8,600 Marines from Okinawa and transform Guam into the base for Marine Corps operations in the Pacific.

Local civic groups, such as We Are Guahan and the Boonie Stompers, are against any military use of the land, saying the ranges will damage island history and culture.

But Donald Schregardus, deputy assistant secretary of the Navy for environment, said Thursday that the firing ranges planned at Pagat will be relatively small with large surrounding safety zones that could be preserved and used by the public. The U.S. is looking to acquire 2,100 to 3,400 acres of land &mdash; some of which is on sacred ground &mdash; for the three firing ranges.

&ldquo;Those safety zones do not represent an impact&rdquo; to the environment, said Schregardus, who was on Guam for the open house.

Guamanians could get access to the land at times when there is no training, he said.

But the U.S. plan would still severely limit the public&rsquo;s ability to visit Pagat, which would spoil a spiritual center and symbol of resiliency for Chamorros, said Hope Cristobal, a member of the Boonie Stompers, a group that leads nature hikes and advocates for the environment.

&ldquo;The U.S. is the richest country in the world and has the mightiest military in the world, so why pick on our poor indigenous lands?&rdquo; Cristobal said. &ldquo;We will feel so defeated if they take Pagat.&rdquo;

The process of moving Marines to the island has been held up for months because to the controversy over Pagat.

Lynda Aguon, historic preservation officer for Guam, has pressed the DOD for more public hearings for the local civic groups. The public input at the high school could clear the way for an agreement on using historic sites &ndash; if the Navy heeds the concerns of groups such as the Boonie Stompers, she said.

&ldquo;It depends on if they take the public comments and use them and not just go through the motions,&rdquo; Aguon said.