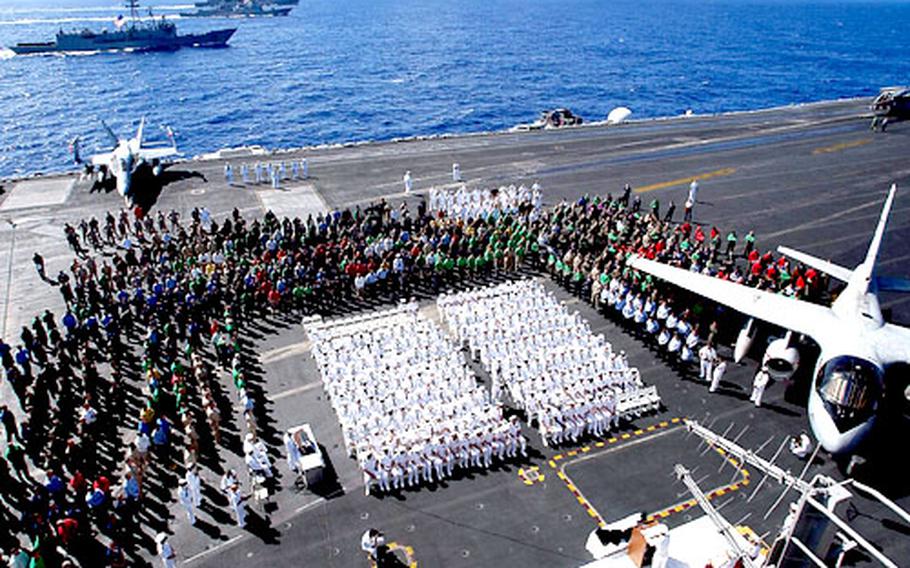 The Navy recovered the remains of all four Navy aviators killed when their S-3B Viking crashed on Kita Io Jima last week, Navy officials said Monday, and was expected to halt recovery operations soon, leaving most of the aircraft wreckage on the small volcanic island.

The announcement came after crew and officers of the USS John C. Stennis aircraft carrier, many donning their whites, had gathered on deck for a memorial service, as S-3B Vikings flew overhead in a missing man formation and the four aviators were given a 21-gun salute.

Their Viking was flying a practice mission from the Stennis when radio contact with the crew was lost at 7:42 p.m. Aug. 10 &#8212; between sunset and moonrise, said Cmdr. Scott Gureck, a 7th Fleet spokesman.

Gureck said, &#8220;I expect recovery operations will conclude shortly. Recovery teams believe they have recovered as much of the human remains as they can find and they&#8217;ll likely be able to find.&#8221;

With the S-3B Viking&#8217;s pieces strewn on a sheer mountain face 1,400 feet above sea level, retrieving the wreckage would be an extremely dangerous task, Gureck said.

&#8220;The recovery operation was focused on the recovery of human remains and hazardous materials and that recovery is complete,&#8221; Gureck said.

Air Force rescue personnel had to rappel from a helicopter to reach the wreckage about 100 feet below a ridgeline, Gureck said.

&#8220;It was extremely dangerous. It&#8217;s practically a sheer cliff face that they were trying to conduct recovery operations on,&#8221; he said.

Gureck said the Navy still is investigating the cause of the crash. He wouldn&#8217;t speculate on how long the probe might take.

Megan Mouch contributed to this report