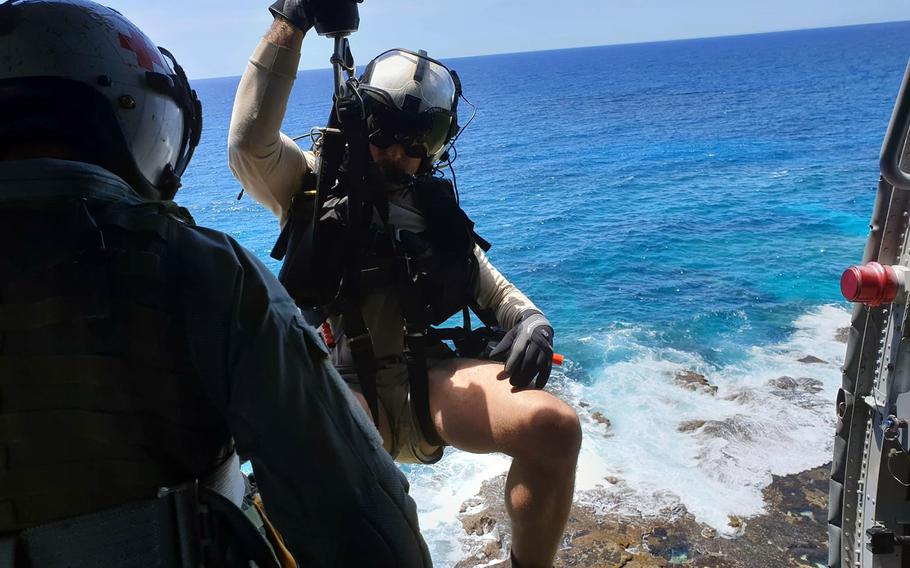 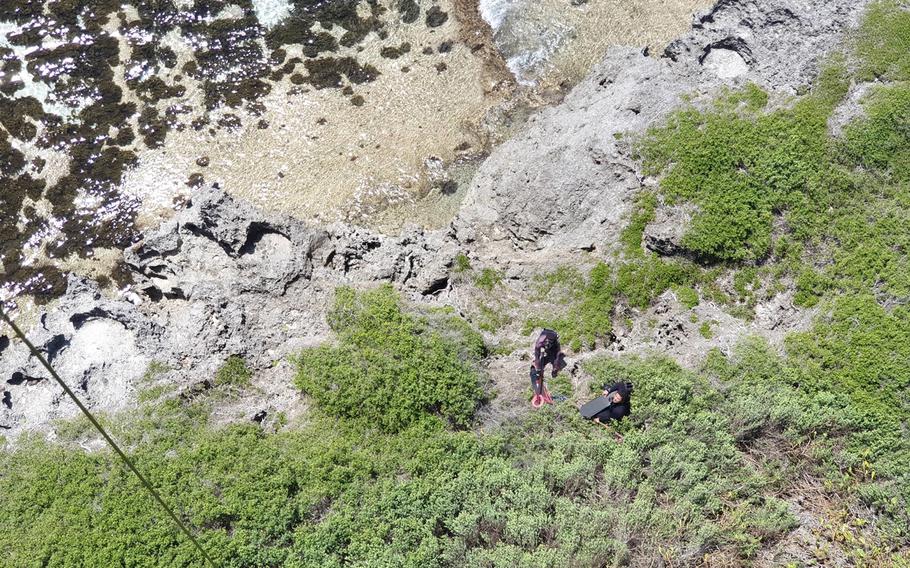 Two local spear fishermen are rescued by sailors from Helicopter Sea Combat Squadron 25 after their watercraft sank off the east coast of Guam on April 11, 2019. (Kyle Bowen/U.S. Navy)

A Navy helicopter rescued two spearfishermen stranded on a cliff on Guam’s east side recently after their boat sank.

The incident marks the ninth emergency call, for a total seven medical evacuations, by the Island Knights of Helicopter Sea Combat Squadron 25 so far this year, according to a Navy news release April 12.

“This rescue highlighted the professionalism and efficiency of the Island Knight Team,” said Lt. Cmdr. Sean Rice, commander of the MH6-S Knighthawk that rescued the men, in the release.

Once their boat sank April 11, the fishermen swam over a jagged reef and through breaking waves to the cliff, but they could not be reached from the shore or sea, according to the Navy statement.

The Knighthawk crew, responding to a call from U.S. Coast Guard Sector Guam, hovered above the two and hoisted them aboard.

“We received the report during preflight for a scheduled flight event,” Rice said in the press release. “Within minutes, our maintenance team had the aircraft ready for an expeditious launch.”

The two fishermen were brought to Naval Hospital Guam 30 minutes later, according to the statement

The squadron performed three other medevacs in March, including the rescue of a stroke victim aboard the Ocean Dream cruise ship, then quickly rigging the same helicopter for airborne firefighting to contain a fire at Nimitz Hill in Guam, according to an email from Lt. Richard Schuster, squadron public affairs officer.

“I keep saying that I could not be prouder of the Sailors of HSC-25,” said commanding officer Cmdr. Frank Loforti in the release. “But every week our Sailors take the squadron to a new level. We have the finest Sailors in the fleet, and I can’t thank them enough for ensuring our aircraft are always ready!”