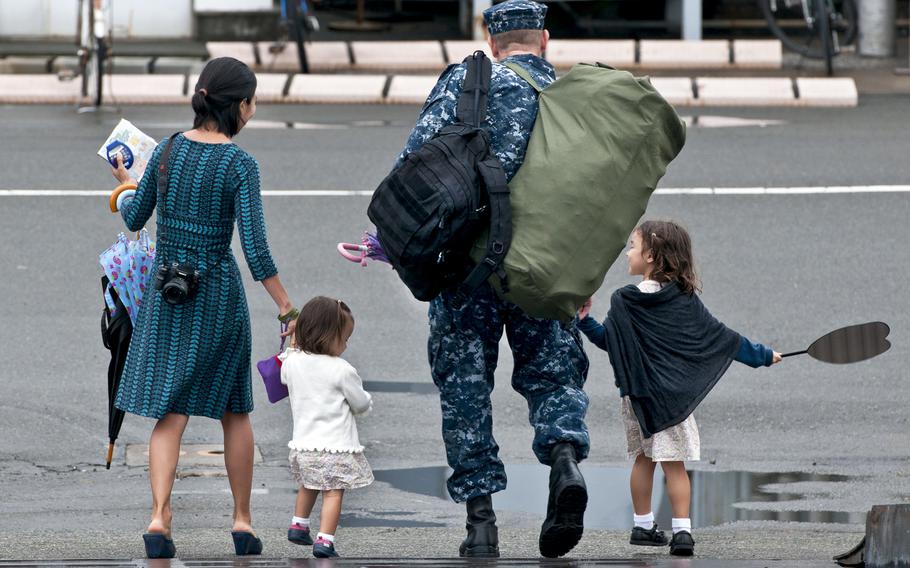 A sailor's family members can now move ahead or stay behind up to six months during a change of duty station in certain circumstances and locations, the Navy announced Thursday. (Charles Oki/U.S. Navy)

A sailor’s family members can move ahead or stay behind up to six months during a change of duty station in certain circumstances rather than moving all at once, the Navy announced Thursday.

The new policy, which goes into effect immediately, seeks to give sailors and their families more flexibility and minimize disruption of essential tasks during permanent-change-of-station moves, the Navy said. Previous policies required sailors and family members to move all together with almost no exceptions.

Sailors’ spouses can now move separately to wrap up a job or education, see their children through the school year, tend to special-needs children or care for an immediate family member suffering from a chronic or long-term illness.

The change expands on a policy the Navy adopted in May that allows a child to finish the school year after a parent changes duty stations. The previous rule required a child to transfer at the end of a school term during a PCS, even if it fell midway through the school year.

For moves within the States, dependents can leave up to six months before or after a sailor in the situations listed under the new rules.

Family members moving from the States to overseas can delay travel up to six months in these circumstances but cannot move before the sailor.

Dependents going from overseas to the States can move six months in advance but can stay behind only to see a child through a school year.

A family will still receive just one housing allowance, whether a spouse moves before or after the sailor.

Requests for advanced or delayed travel must be submitted to Navy Personnel Command.