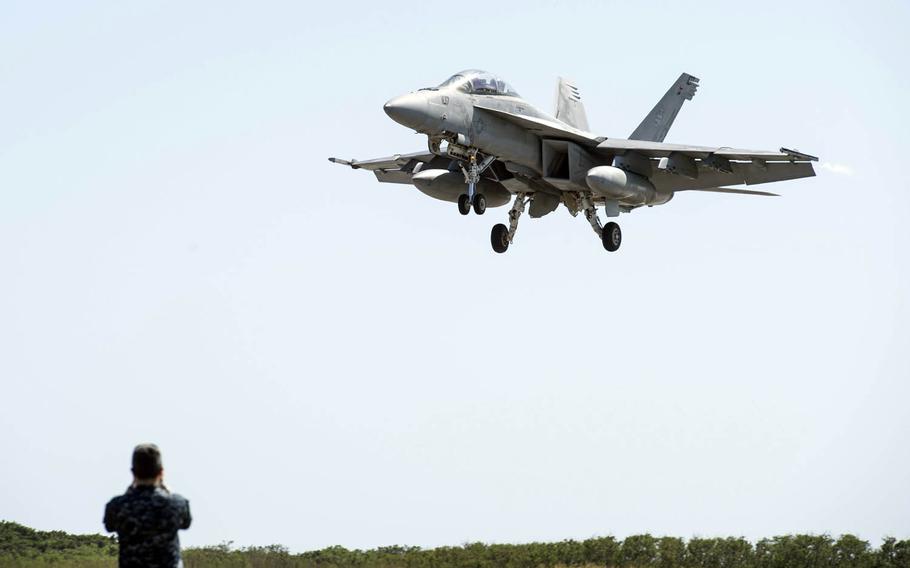 An F/A-18E Super Hornet attached to the Diamondbacks of Strike Fighter Squadron 102 practices a touch-and-go landing during field carrier-landing practice at Iwo To, Japan, on May 11, 2016. (Raymond Diaz III/U.S. Navy photo)

YOKOSUKA NAVAL BASE, Japan — Japan has taken a step closer toward providing the Navy with a long-sought replacement base for qualifying pilots to land on aircraft carriers, though the plan faces opposition from nearby island residents concerned about noise and damage to the tourist economy.

Moving to uninhabited Mageshima would be safer than the Navy’s current arrangement at historic Iwo To, the island known during WWII as Iwo Jima, service officials have said.

The national government and the majority private owner of Mageshima, in Japan’s southwestern Kagoshima Prefecture, have agreed to appraise the land’s value, Defense Ministry officials told Stars and Stripes.

The appraisal survey, covering about 1,800 acres, is expected to finish up in March, the Defense Ministry said.

If the Japanese government purchases Mageshima, it would build a Japan Self-Defense Forces base there capable of hosting the occasional U.S. landing practices.

Iwo To, the island where Marines planting the U.S. flag atop Mount Suribachi became an iconic image of WWII, was always meant to be a temporary home for the Japan-based 7th Fleet’s field carrier landing practices.

Iwo To’s tropical weather and isolation make it a riskier place to train than normally allowed by the Navy, Capt. Dennis Mikeska told Stars and Stripes during practice there in 2014.

No matter how poor the weather, pilots must land at Iwo To because there is no nearby alternate airport, Mikeska said.

Mageshima is close to several airports and Marine Corps Air Station Iwakuni, where Carrier Air Wing 5 is scheduled to move from Naval Air Facility Atsugi as early as next year.

The aircraft carrier USS Ronald Reagan sends its jets to Iwo To as part of mandatory training for pilots to remain qualified for carrier-deck landings.

That has led officials on Tanegashima, seven miles from Mageshima, to oppose base construction on the grounds that it would interrupt the quiet lives of an island devoted mostly to farming and fishing.

The mayor of Tanegashima’s largest town declined to comment on the proposed move, but an assistant confirmed the town remained opposed.

About 25 miles south of the proposed base site is Yakushima, a tourist destination that features a primeval forest listed as a United Nations World Heritage Site.

“There will be a noise problem, and we are concerned with the effects it may have on tourism, which is the main industry on the island,” a spokeswoman for A Group to Protect Mageshima told Stars and Stripes by phone Wednesday.

It’s unclear just how much noise Yakushima would get from jets headed to Mageshima, or from Japanese operations, if plans proceed. Carrier-landing practices vary, but typically take place once or twice per year.

The citizens group says the island’s spiritual, peaceful image could suffer in the minds of tourists, if they are reminded of a military base nearby.

The spokeswoman, who declined to be named, said she was aware of news reports that a Mageshima base could be used to relocate some functions from Marine Corps Air Base Futenma on Okinawa.

The Okinawa base, which lies in a formerly rural area that is now densely populated, is a source of tension and protest between Okinawan activists and the U.S. military.

“If a permanent facility is made on the pretext of easing the burden on Okinawa, we will feel that we need to cooperate,” the group spokeswoman said. “But this move is mainly to relocate [landing practice], and it is questionable if it really will ease the burden on Okinawa.”

Local governments have no right to intervene in national defense decisions, Kagoshima Prefecture Gov. Satoshi Mitazono said in a statement.

However, the prefecture is obligated to protect the area, Mitazono said.

“In regards to field carrier landing practice on Mageshima, the Japanese government first needs to explain sufficiently and thoroughly to the local [residents],” Mitazono said.

Stars and Stripes reporters Chiyomi Sumida and Hana Kusumoto contributed to this report.