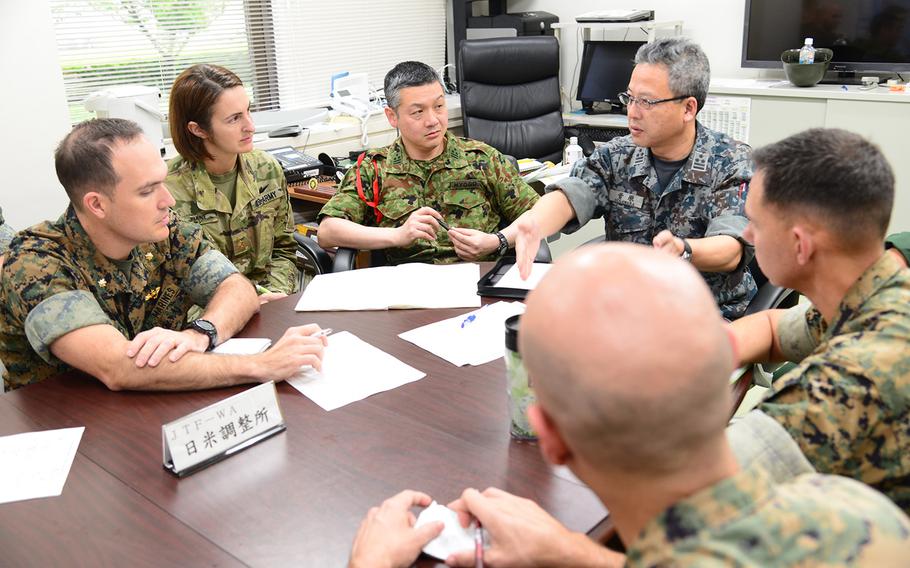 U.S. Army Maj. Jacqueline L. Hearne, second from left, was one of a handful of American troops living in Kumamoto when the earthquakes struck. Hearne works as a liaison officer at a Japan Self-Defense Force office in the region. (Courtesy of Jacqueline L. Hearne)

U.S. Army Maj. Jacqueline L. Hearne, second from left, was one of a handful of American troops living in Kumamoto when the earthquakes struck. Hearne works as a liaison officer at a Japan Self-Defense Force office in the region. (Courtesy of Jacqueline L. Hearne) 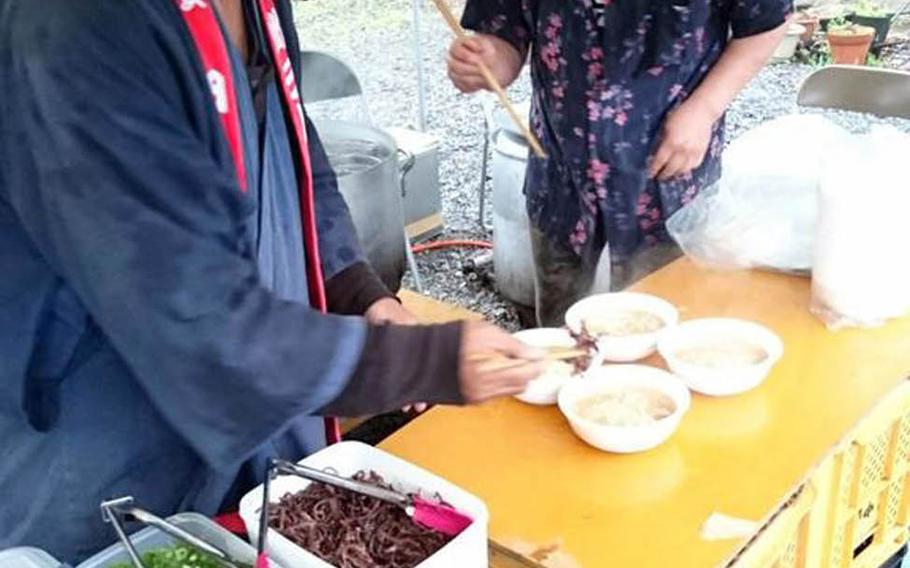 Tatsuro Hamada, left, cooks ramen for earthquake survivors last week in Kumamoto, Japan. Although Hamada's home also suffered damage, he has been cooking ramen in hopes of feeding as many people as possible in wake of the disaster. (Courtesy of Toshihiko Fujita) 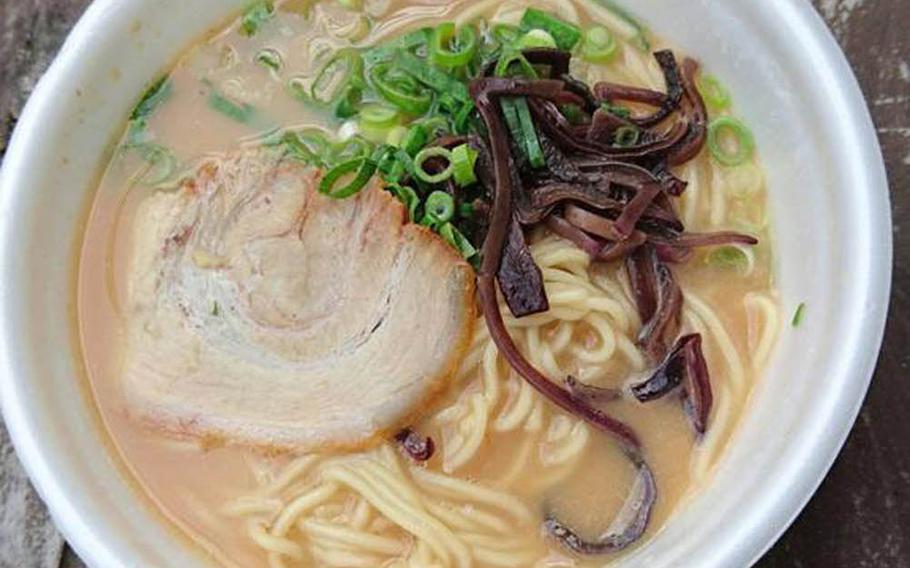 Ramen cooked by Tatsuro Hamada was one of the few warm meals that some earthquake survivors, who were without water and electricity, ate last week in Kumamoto, Japan. (Courtesy of Toshihiko Fujita) 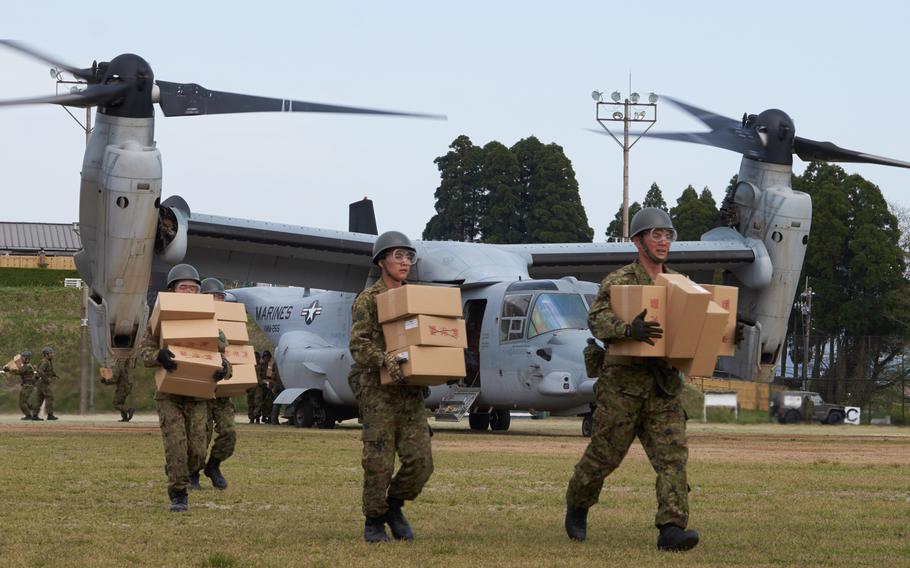 Soldiers from the Japan Ground Self-Defense Force unload emergency aid off a U.S. MV-22 Osprey at Hakusui Sports Park in Kumamoto, Japan, on Wednesday, April 20, 2016. The aid will be distributed to earthquake victims in the southern Japan prefecture. (James Kimber/Stars and Stripes) Tatsuro Hamada, 71, shown here in an advertisement for free ramen served to people who survived the 2011 Great East Japan Earthquake, just after its fifth anniversary. Hamada is now donating ramen to survivors of the Kumamoto Prefecture earthquakes, and is accepting donations from an unofficial military spouses group, Helping Hands for Tohoku. (Courtesy of Masako Sullivan)

YOKOSUKA NAVAL BASE, Japan — A fresh bowl of ramen is a popular treat throughout Japan, but it’s a lifeline for many who lost their homes in a series of earthquakes in Kumamoto Prefecture since April 14.

The hundreds of people in Mashiki-machi lining up for Tatsuro Hamada’s noodle soup can thank the 71-year-old for efforts to feed disaster survivors that stretch back to the Great East Japan Earthquake in 2011.

Behind the scenes, they can also thank a U.S. military family group, which by this weekend will have sent Hamada about $1,320 worth of yen to keep the soup supplies coming.

The efforts by Helping Hands for Tohoku, an unofficial group that sprung up from Navy bases in Japan following the 9.0 magnitude earthquake five years ago, aren’t nearly as large as the ongoing U.S. airlift to Kyushu, or the work done by the Japan Self-Defense Forces. However, they do give people who care a direct and personal way of contributing to the relief of a devastated region.

Helping Hands hasn’t stopped providing aid to Tohoku since the earthquake, tsunami and nuclear disasters on March 11, 2011. Although volunteers with the group sometimes encounter the perception that Japan has fully recovered from 2011, that isn’t the case. Tens of thousands of people remain in temporary housing in the region.

When dozens of earthquakes and aftershocks began striking Kyushu, even people struggling in Tohoku were looking for ways to help the people who needed it most now.

“Families in Fukushima said to please help them,” said Sonja McClelland, a Helping Hands volunteer from Yokosuka Naval Base. “They set aside their needs so we can direct more aid toward [Kyushu].”

McClelland was stationed in Japan during the 2011 disaster and in Mississippi when Hurricane Katrina ravaged the U.S. Gulf Coast.

McClelland has organized kimono dressings for children and other fundraisers over the years to help seniors, day care centers and others get back on their feet.

When she saw the first disaster images come from Kumamoto on April 14, she and others involved in the group worldwide quickly began thinking about a new aid outreach.

“Sheer terror goes through your body after going through [the 2011 disaster],” McClelland said. “Seeing that made all of us tear up and say, ‘Oh my god, here we go again.’”

Masako Sullivan, a Navy spouse and founder of the group now living in San Diego, contacted a friend from their work in Tohoku, who led them to Hamada.

“The more we help [Hamada], the more people will be fed,” Sullivan said.

With about 100,000 people still in shelters and no running water in some areas, “donations have been arriving too slow,” Sullivan added. “People need food and water, and he has been feeding and distributing water in the community with our donations.”

The U.S. military had worked with the Japanese government to airlift more than 65,000 pounds of aid supplies as of Thursday.

Sasebo Naval Base, a few hours away by vehicle, is the closest U.S. military base to Kumamoto city.

However, the U.S. has individual liaison officers working at Japan Self-Defense Force bases throughout the country – one of whom has lived in Kumamoto since July.

Army Maj. Jacqueline Hearne, 35, of Gainesville, Fla., watched as dishes fell from shelves and shattered during the first strong earthquake on April 14.

“My Japanese neighbors were quick to come and check on me and bring me water,” she said.

Hearne reported to the Western Army headquarters at Camp Kengun and linked up with three other soldiers and three U.S. Army Japan civilian workers, who were in Kumamoto planning a conference when the quakes hit. The group coordinated U.S. assistance once it was requested by the Japanese government, she said.

Japanese friends and neighbors have been severely impacted by the disaster, Hearne said.

“I have a friend whose host family had a business on the ground floor and a home on the upper floor of a building in Mashiki (a village that suffered extensive damage in the quakes),” she said. “It collapsed and they have lost everything.”