Navy explosives team has a blast at Cobra Gold exercise 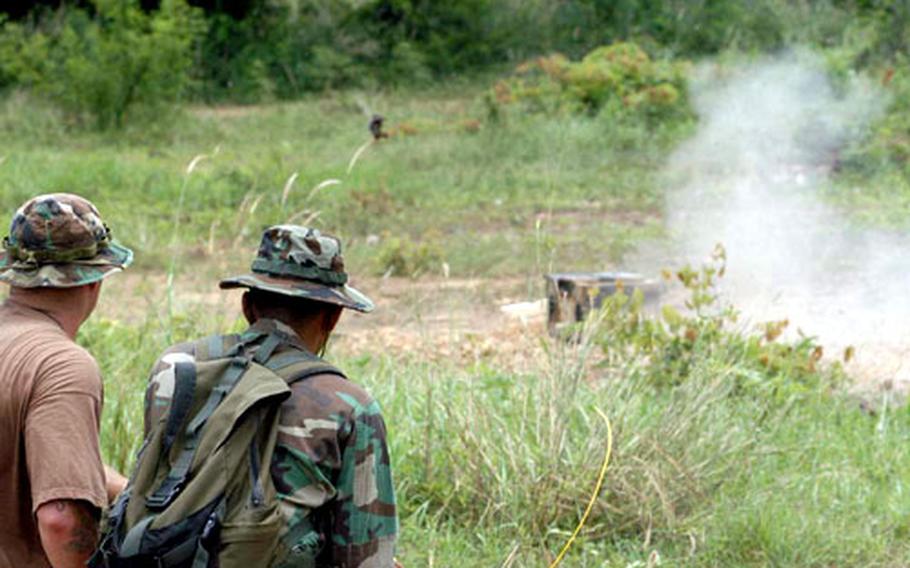 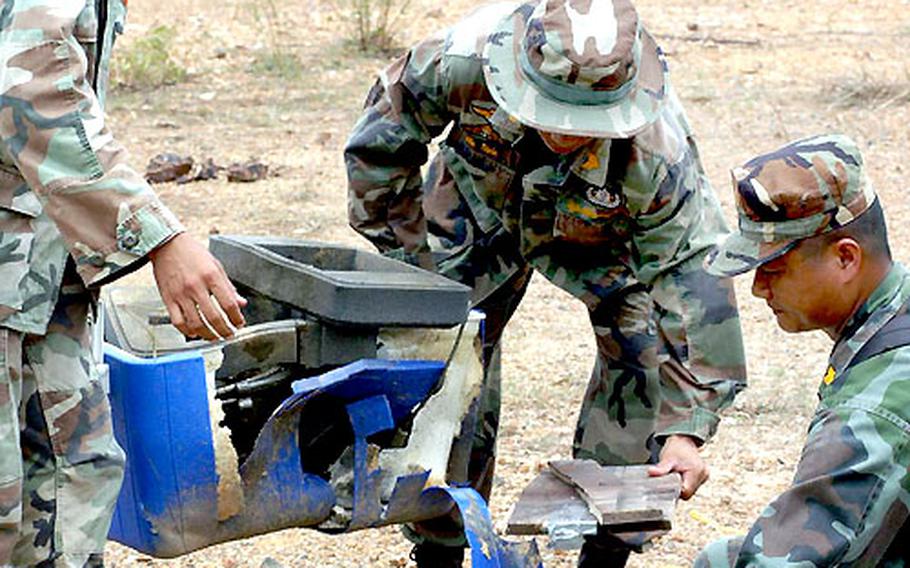 Royal Thai servicemembers pick up the remains of objects blown up as part of the demonstration Saturday. (Juliana Gittler / S&S)

A car drives by a dock and heaves out a water-cooler-sized object. It could be a homemade explosive device.

What do you do?

Disrupt it, of course &#8212; the technical term for making sure the explosive is separated from the power source and initiator, or detonator.

Explosive ordnance disarmament personnel are trained to decide what a device is &#8212; and how best to disarm it. During Cobra Gold, members of EOD Mobile Unit 5 from Sasebo, Japan, and Guam, demonstrated disruptions for Royal Thai EOD sailors.

The techniques are as varied as the types of improvised devices.

EOD personnel start by simply examining a device, looking for obvious indicators, then using a small, portable X-ray machine to scan the object.

The X-ray image can be scanned into a computer and sent to another location for analysis.

After deciding what it is, EOD units disrupt it by blasting through it with a powerful jolt of water or a metal slug, propelled by a modified shotgun shell.

The blast of water alone could drill a hole though a car door, said Lt. j.g. Robert Pizzini.

Either method should separate the improvised bomb&#8217;s explosives from its detonator or trigger, rendering it harmless.

An improvised explosive essentially is any device taking advantage of explosive materials for something other than their intended purpose, Pizzini said. For instance, the bomb that destroyed the federal building in Oklahoma City used fertilizer.

The EOD team also will be tackling floating mines during Cobra Gold. These mines tend to be placed in shipping lanes and near docks, creating a threat to civilians. Water-based mines more likely will be traditional sea mines than improvised explosives, Pizzini said, and so are dealt with differently &#8212; usually tugged away and blown up.

&#8220;Large explosives floating around in the ocean fused is generally a dangerous thing,&#8221; he said.

As part of their training, in general and at Cobra Gold, EOD teams parachute in or dive to reach a suspicious object, then attach a charge to destroy it. That requires jumping from planes or diving from boats carrying dangerous explosives.

EOD work always is risky, Pizzini said, but that doesn&#8217;t stop him and his team members from loving what they do &#8212; especially parachuting and diving.