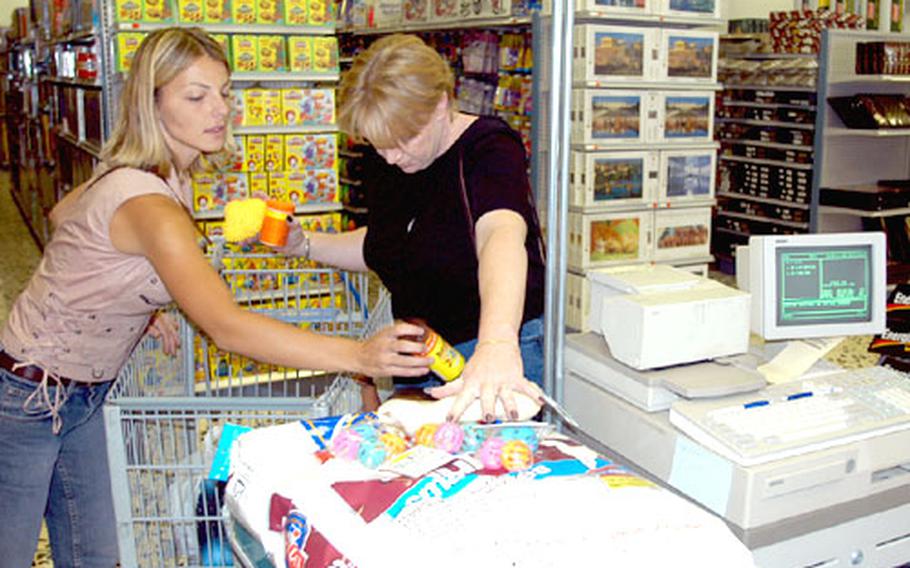 Tina Moser, left, and Susan Crosby unload pet supplies from their cart at the new Navy Exchange annex at Agnano in Italy. The exchange’s Country Store is closing down and moving to the main Agnano complex. (Jason Chudy / S&S)

The Navy Exchange Country Store and warehouse will be closing its doors in the coming weeks as services are moved to the nearby main Agnano site.

The Country Store site was also home to the Naval Support Activity Naples auto shipping lot, library and Fleet Technical Support Center detachment. All moved to new buildings at the Capodichino base or Gricignano family housing area in the past two years.

The move will allow the Navy to return the store&#8217;s few acres of leased land back to its owners. This will save the Navy more than $275,000 in annual rent and alleviate off-base travel between stores for shoppers.

&#8220;Everything being in one base is fantastic,&#8221; said shopper Elizabeth Wilkinson, whose Royal Navy husband works at the nearby Allied Forces Southern Europe headquarters. &#8220;We tended to miss [shopping at] the Country Store if we were in a hurry.&#8221;

Now everything from the Country Store will be on the main Agnano base, but will be divided between two buildings.

The store&#8217;s furniture section is moving to the first two floors of Agnano&#8217;s Building 15, across from the east gate.

Cirino explained that the new facilities will benefit the customers.

Currently, customers shopping at the main exchange must leave the facility to get to the Country Store. Between the two facilities is an Italian movie theater complex.

Another way customers will benefit, Cirino said, is that management will be placing much of the store&#8217;s furniture on sale in the coming weeks. Instead of moving the furniture they would rather sell it.

New furniture will replace whatever is sold during the sale.