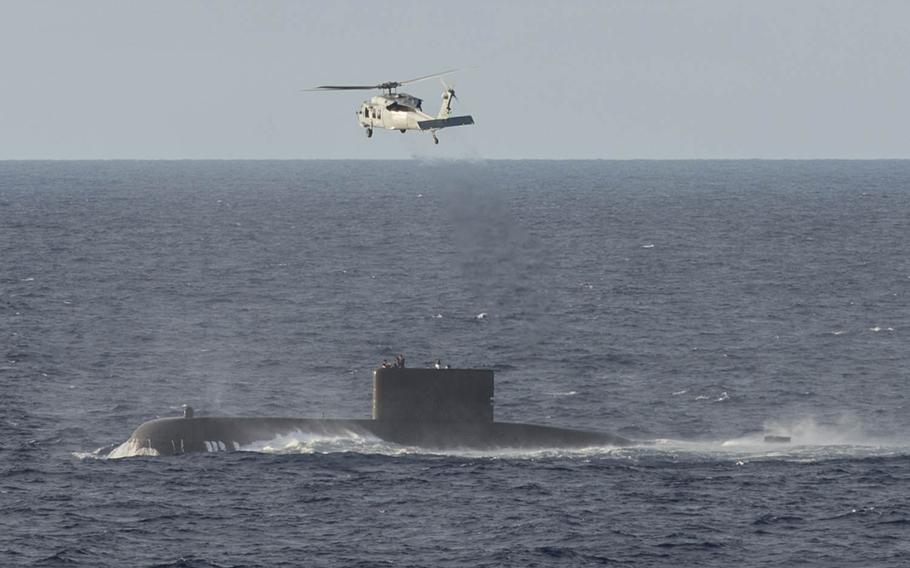 An MH-60S assigned to the Blackjacks of Helicopter Sea Combat Squadron 21 performs the medical evacuation of a sailor from the South Korean submarine SSK Lee Eok Gi to hospital ship USNS Mercy, Friday, May 27, 2016. Mercy is deployed in support of Pacific Partnership 2016. (Elizabeth Merriam/U.S. Navy)

SEOUL, South Korea — A Navy hospital ship taking part in disaster relief training was diverted for the real thing, dispatching a helicopter to pluck a South Korean sailor from a submarine Friday in the mid-Pacific.

The USNS Mercy, which is operated by military sealift command personnel from San Diego, Calif., changed its course after receiving orders Thursday morning to help the Korean navy submarine, a Pacific Partnership news release said. The ship was about 18 hours away at the time.

An MH-60S Seahawk helicopter took off from Mercy early Friday and safely hoisted the sailor from the deck of the surfaced submarine, then took him to the hospital ship for treatment, the statement said.

Mercy, which is equipped to provide mobile acute medical and surgical services to deployed forces ashore and at sea, was in the area for multinational disaster response drills.

“It was fortuitous [that Mercy was in the vicinity] because we have highly qualified surgeons and medical teams aboard the ship,” said Lt. Cmdr. Pete Bradford, department head for the vessel’s main operating room and medical treatment facility.

The ship will visit East Timor, the Philippines, Vietnam, Malaysia and Indonesia during Pacific Partnership 2016, which is aimed at strengthening partner nations’ ability to collectively respond in a natural disaster or crisis.