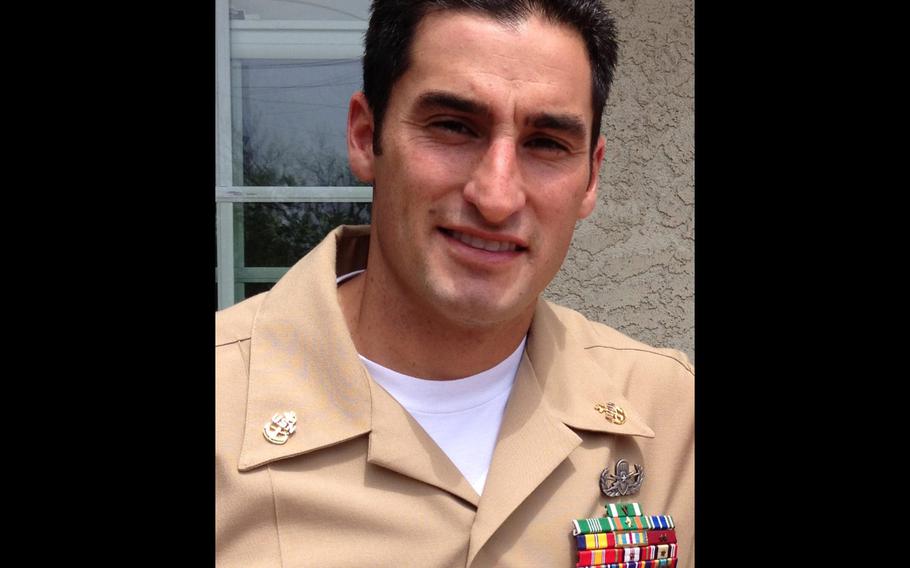 IRBIL, Iraq — Chief Petty Officer Jason Finan, the Navy explosives ordinance disposal technician who was the first American killed in the battle to retake Mosul from the Islamic State group, died while warning the forces he was supporting about a roadside bomb, the top commander for U.S. forces in Iraq and Syria said Sunday.

Finan, 34, died on Oct. 20 from injuries sustained when his own vehicle hit a roadside bomb. He was remembered for his sacrifice by both Lt. Gen. Stephen Townsend, the top U.S. commander for Operation Inherent Resolve, and Defense Secretary Ash Carter in Irbil on Sunday. The two leaders were in Irbil to discuss the Mosul offensive with members of the Kurdistan Regional Government.

“(Finan) was carrying out his very important responsibilities as an (explosives ordinance disposal) technician” when he died, Carter said, noting that Finan and his fellow technicians are owed “a deep debt of gratitude.”

Finan was attached to Navy SEALs who were advising the Iraqi counterterrorism forces as they advanced on Mosul, U.S. officials traveling with Carter confirmed.

Townsend said Finan’s death occurred as he was directing the team’s vehicles away from another roadside bomb he’d spotted as they moved to a more secure location after Islamic State group fighters moved toward their position.

Initially, “when the (Iraqi counterterrorism forces) attack moved forward (Finan’s team) had moved to a position on the battlefield behind the Iraqi front lines,” Townsend said.

During the advance, Islamic State group fighters that the Iraqis were engaging “started pressing towards the counterterrorism (forces) position,” Townsend said. Finan “had seen a (roadside bomb) and warned his teammates and was directing everyone to safety when he struck (another roadside bomb.)”

The Pentagon has said previously that Iraq’s counterterrorism forces do not have the same type of hierarchical organization that would have U.S. advisers embedded at a division headquarters level, meaning that Americans working with them are closer to the front lines than they would be if embedded with conventional Iraqi units.

Carter also spent time with one of Finan’s team members in Baghdad on Saturday remembering the specialist and “sharing in our sadness” about his loss, Carter said.