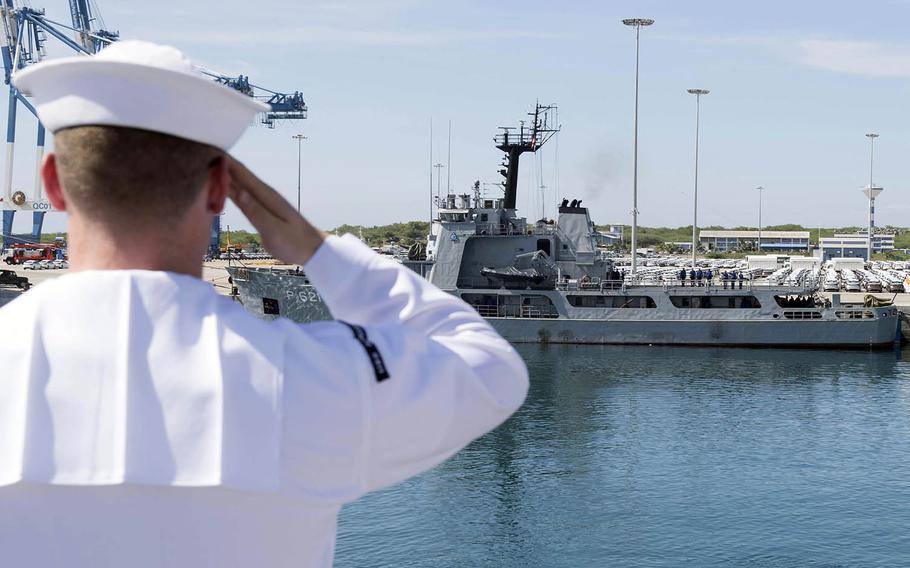 After hundreds were killed Easter Sunday in a series of bombings at public buildings, churches and hotels across Sri Lanka, the U.S. and Sri Lankan militaries have called off their planned Cooperation Afloat and Readiness Training exercise this week, according to the U.S. Navy.

The USS Spruance and USNS Millinocket arrived Thursday at Sri Lanka’s Hambantota port, about 160 miles southeast of the country’s capital of Colombo, for what was planned as a weeklong exercise. Seven of the eight bombings occurred in or near Colombo, with one in Batticaloa, about 170 miles northeast of Hambantota port.

U.S. 7th Fleet spokesman Clay Doss, in a statement Monday to Stars and Stripes, said that “all U.S. personnel involved in CARAT are accounted for” after the attacks, and they are now leaving the country.

“We fully support our Sri Lankan partners during this tragic situation and offer our deepest condolences for all of the victims,” he said.

The death toll in Sri Lanka rose Monday morning to 290, including dozens of foreigners, The Associated Press reported. Police have arrested 24 people in connection with the attacks.

About 500 people were wounded in the deadliest attack in the country since its civil war ended in 2009, the report said. U.S. authorities said several Americans were among the dead, while Britain, India, China, Japan and Portugal said they, too, lost citizens, according to AP.

Secretary of State Mike Pompeo on Monday condemned the violence, saying on his official Twitter account that the attacks “demonstrate the brutal nature of terrorists whose sole aim is to threaten peace & security.”

“We stand ready to help!” he added.

The U.S. Embassy in Sri Lanka issued a travel advisory on Sunday, suggesting visitors “exercise increased caution in Sri Lanka due to terrorism.”

This is the 25th year for CARAT, which is the Navy’s “oldest and longest continually running regional exercise in South and Southeast Asia,” according to an April 18 Navy statement. Sri Lanka was the first of seven partner nations to participate in the 2019 iteration.

During CARAT’s Sri Lanka phase, the Navy and Marine Corps planned to work with the country’s armed forces at sea to test communication, “coordinate and respond to scenarios at sea to include maritime patrol operations; maneuvering exercises; surface gunnery drills; visit, board, search and seizure drills; vertical replenishments operations; flight operations and search and rescue swimmer exercises,” according to the statement.

A Navy spokesman would not say how much of the planned exercises took place.

After they leave Sri Lanka, sailors and Marines will continue CARAT with other countries throughout the year including Brunei, Indonesia and Thailand, according to the Navy statement.

Caitlin Doornbos
Caitlin Doornbos
Caitlin Doornbos covers the Pentagon for Stars and Stripes after covering the Navy’s 7th Fleet as Stripes’ Indo-Pacific correspondent at Yokosuka Naval Base, Japan. Previously, she worked as a crime reporter in Lawrence, Kan., and Orlando, Fla., where she was part of the Orlando Sentinel team that placed as finalist for the 2017 Pulitzer Prize for breaking news. Caitlin has a Bachelor of Science in journalism from the University of Kansas and master’s degree in defense and strategic studies from the University of Texas at El Paso.
Christian Lopez
Christian Lopez