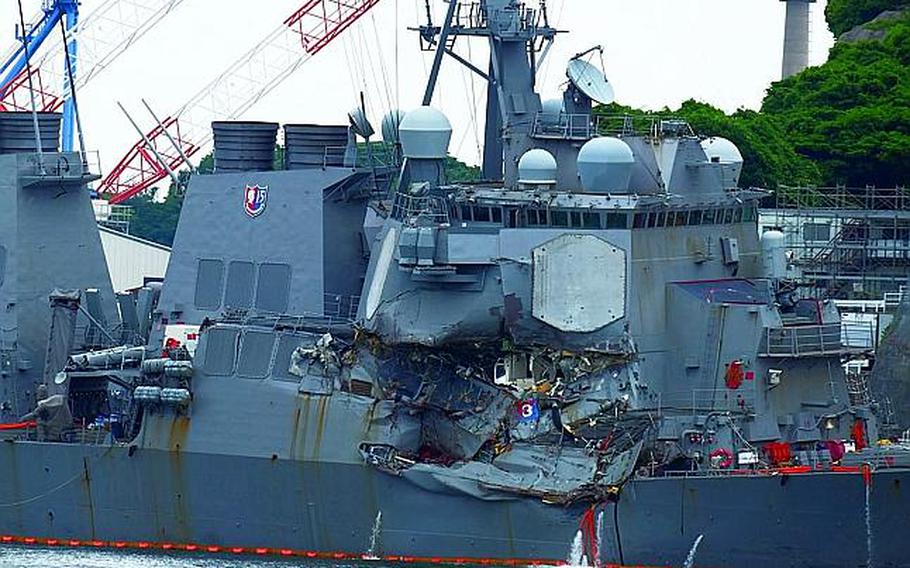 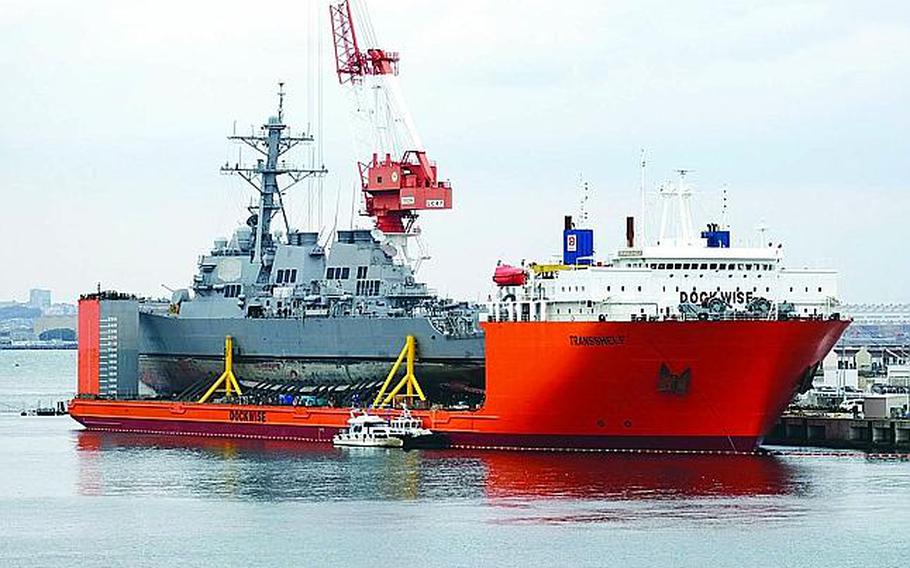 The USS Fitzgerald is seen at Yokosuka Naval Base, Japan, aboard the MV Transshelf, Monday, Nov. 27, 2017. (Stars and Stripes)

YOKOSUKA NAVAL BASE, Japan — The Navy has enacted nearly all the changes recommended in two 2017 reports it ordered after two fatal collisions at sea involving U.S. warships, the vice chief of naval operations recently told Congress.

Of the 117 changes the reports recommended — later trimmed to 103 — 91 were put in place, according to a Feb. 25 memorandum to Congress by Adm. William Moran. Those changes were meant to address years of underfunded operations, an increased pace of operations and an erosion of safety standards, according to the reports.

Navy Secretary Richard Spencer ordered the reports to identify problems that led to the separate tragedies involving ships of the Japan-based 7th Fleet. He tasked the Navy with conducting a comprehensive review in August 2017 and the following month asked an independent team of subject matter experts to conduct a separate strategic readiness review.

The USS Fitzgerald collided with a Philippine container ship in June 2017, killing seven sailors. Two months later, the USS John S. McCain ran into a Liberian merchant vessel, resulting in the deaths of 10 sailors. Both destroyers sustained millions of dollars in damages.

A little more than year after the reports came out, Moran in his memo declared the service “currently safe to operate and a more effective Navy than we were a year ago.”

While the memorandum provides the most detail yet on the changes made after the tragic collisions, some in Congress are pushing for more information to ensure safety standards are being met.

In a heated exchange last month, Sen. Angus King, I-Maine, challenged Adm. Philip Davidson, commander of the U.S. Indo-Pacific Command, for more detail about the progress of the implementation of the recommendations.

“I would like to see specific data on where we stand with issues like certification of sailors and personnel on the ships, training rules, staffing levels — and I want real numbers,” King told Davidson at an Armed Services Committee hearing Feb. 12. “I don’t want general, ‘we’re working on staffing or we’re working on more training’ because these were avoidable tragedies.”

Davidson directed King to Moran’s report and said those numbers “were all readily available.”

The report highlighted several recommendations that have been implemented and offered some numbers, but Moran did not list all changes in his memo.

Moran broke down the recommendations into three tiers of importance: safety, followed by operations effectiveness and, finally, “strengthening the culture of operational excellence.”

Safety issues At the time of the collisions, ships were sent to sea to keep up with a fast pace of operations despite having fallen behind on required maintenance and mandatory training for their crews.

The practice of waiving those requirements — called Risk Assessment and Mitigation Plans — was eliminated in October 2017 while the reviews were underway. In their place, the Navy conducted Ready-for-Sea Assessments to evaluate the manning levels, training certifications and equipment status on operational vessels.

In Japan, 15 of 18 ships passed these assessments, while three were “sidelined for additional training and maintenance prior to getting underway.”

The report did not identify the sidelined ships, and 7th Fleet officials declined to release their names for security reasons.

Moran in his memo said all ships reported implementing the suggested sleep schedules since the policy was rolled out in November 2017, but “anecdotal feedback indicates uneven compliance during manpower-intensive operation scenarios.”

Effectiveness and culture To reduce workloads, the Navy last year put the need for manpower on ships and on shore in overseas locations ahead of the need at U.S. bases, Moran’s memo states.

That meant assigning some personnel to temporary duty overseas and putting some operations on hold to make sure forward-deployed ships “went to sea with the manpower they needed,” he wrote. Moran said that on average, 100 percent of overseas billets are filled, compared to the Navy-wide 95 percent.

“I’m concerned that this reveals an underlying problem still facing the Navy — that it simply is not putting enough sailors on the ships to cover the workload,” Pendleton said at a Dec. 12 congressional hearing.

Meanwhile, the Navy increased incentives for sailors to remain overseas longer to boost stability, and in May 2018 increased the standard tour length by one year for Japan, Guam and Spain. Incoming sailors at those locations are now serving up to four years.

When Vice Adm. Robert Burke, chief of naval personnel and deputy chief of naval operations, announced the change last year at a townhall meeting in Yokosuka, he said the intent was to avoid having commands “in a state of continuously having to train up their people and not having a seasoned, experienced crew that can train up the new junior folks.”

In the past year, the Navy has also issued several assessments of leadership, including fleet-wide officer-of-the-deck competency checks. Results revealed “deficiencies in practical applications of the Maritime Rules of the Road,” but 91 percent of test takers passed the assessments, according to the memorandum. As a result, the Navy developed two new junior officer-of-the-deck courses for training.

Another assessment of surface warfare officers was improved to better gauge the proficiency of prospective commanding officers. Of the 103 officers who were assessed, five were removed from the command pipeline, according to the memorandum.

More information wanted King, after reviewing the report, continues to seek out more data related to the Navy’s changes.

In a March 10 interview with Defense News Weekly, he said the Navy has “made a good-faith effort to respond” to him and that officials had met with him at the Pentagon. He also commended the service for being “responsive to this tragedy.”

“My age-old question is ‘does it work and how do you know?’ And until I see ship specific data, I’m not going to be satisfied that we’re really making the progress that we should be,” he told Defense News Weekly.