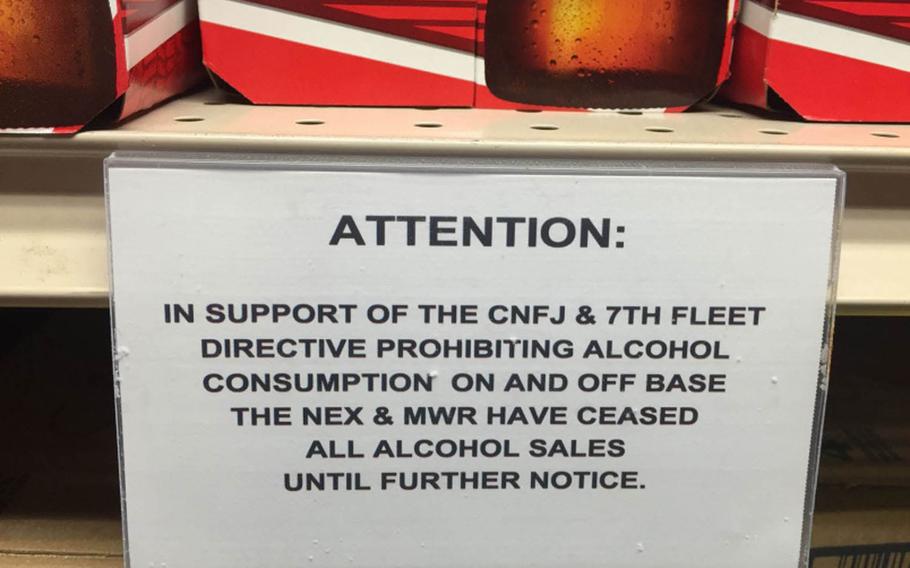 A sign at Yokosuka Naval Base, Japan, explains why alcohol sales have ceased at the commissary, Monday, June 6, 2016. (Tyler Hlavac/Stars and Stripes)

YOKOSUKA NAVAL BASE, Japan — The Navy in Japan rescinded restrictions on sailors drinking alcohol in their homes and on base Friday but retained an off-base booze ban ordered in the wake of multiple high-profile arrests.

Sailors living on or off base can purchase and drink alcoholic beverages at home, though sailors in paygrades E-5 and below still must file plans with their command for off-base activities outside the home, according to a Navy statement Friday.

Sailors E-5 and below are also required to have a liberty buddy when drinking alcohol at on-base bars and restaurants.

“The temporary restriction on alcohol was not intended to be a punishment, nor was it ever intended to be permanent,” Rear Adm. Matthew Carter, Commander Naval Forces Japan, said in a statement. “We took this pause to train and reflect on the dangers of alcohol abuse. We must all be on the lookout to step in before alcohol-related incidents jeopardize our relationship with Japan.”

No sailors had been arrested for off-base incidents since the restrictions began, Navy officials said Friday.

Navy officials have asked civilians, contractors and family members to “show solidarity” with active-duty sailors and not drink alcohol off-base, though they were not required to do so.

Restrictions on servicemembers in Okinawa during the command-mandated period of mourning remain in effect, including a midnight curfew for all ranks and a ban on off-base parties.

Servicemembers in Okinawa also may not stay anywhere off-base that isn't their residence or a hotel.

The Navy ordered restrictions on all alcohol consumption for active-duty sailors in Japan on June 6, two days after Okinawa police reported that a sailor drove drunk down the wrong side of a highway and injured other drivers. That arrest came in the middle of a military-declared mourning period for Rina Shimabukuro, 20, who was found dead in an Okinawa forest in April. Police have recommended murder and rape charges for Kenneth Franklin Gadson, a civilian base worker and former Marine who also goes by the last name Shinzato.

The incidents have sparked anti-base demonstrations on Okinawa. A large protest is planned for Sunday, led by the governor of the island of 1.4 million that hosts about half of all U.S. servicemembers in Japan.

The drunk driving incident became the tipping point for senior Navy officials, who had seen an increase in alcohol-related incidents off-base, some of which generated national headlines in Japan.

The Navy instituted the alcohol ban and barred sailors from non-essential activity off-base for about four days while senior unit leaders discussed the effect of crime on U.S.-Japan relations with each sailor.

At all-hands forums on bases, sailors expressed opinions ranging from an understanding of the political situation to frustration that the actions of a few resulted in restrictions for thousands.

Senior officials responded that they planned to slowly ease the restrictions while discussing lasting options to reduce misconduct.

“We are taking this latest step because our sailors have demonstrated that they understand the strategic impact of their performance on liberty,” 7th Fleet commander Vice Adm. Joseph Aucoin said in a statement Friday. “We can take further steps after our sailors demonstrate the ability to drink responsibly. Responsible behavior by our sailors in Japan is critical to our ability to provide security and stability in the Indo-Asia-Pacific.”