Navy draws a line on some forms of body piercing, ornamentation, tattoos 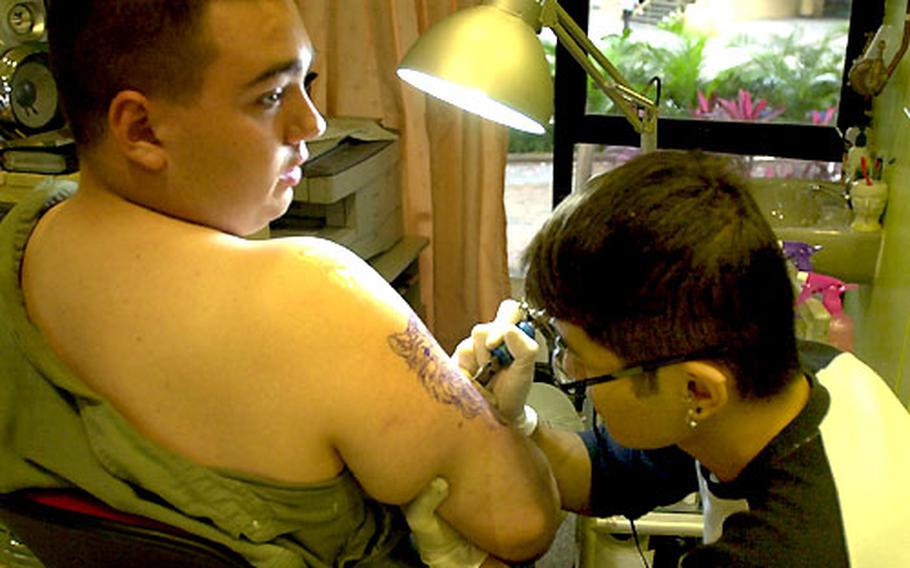 Ryan Huffard of the USS Russell gets a tattoo in Singapore. (Jason Carter / S&S file photo)

As are other forms of self-mutilation, sexually explicit tattoos, some forms of body piercing, and another trend gaining popularity called branding or scarification, which involves the application of a hot object or cuts made to the skin to create a permanent mark, according to a naval administration message released Monday.

&#8220;Navy grooming and personal appearance policy is intended to ensure that Navy personnel set and maintain the highest standards of professional appearance in uniform,&#8221; reads a portion of Naval administration message 021/03. &#8220;Due to the increasing popularity of body art and ornamentation, Navy policy is being revised to provide clearly defined guidance.&#8221;

The changes won&#8217;t keep any more people out of the Navy than in past years because recruiters already were dismissing those with unacceptable body art, said Lt. Bill Davis, a spokesman for the Navy Recruiting Command in Millington, Tenn.

Monday&#8217;s message clears up for uniformed personnel the guidelines recruiters have been using, he said.

Some servicemembers have asked for exemptions based on religious practices. Those requests generally are approved by commanders, but only when the exemptions do not adversely effect military readiness, unit cohesion, standards or discipline, according to a Defense Department directive.

There are options for servicemembers who disagree with commanders&#8217; decisions when they deem a certain tattoo or scarification practice is not supported by a military-recognized religion. The options include re-assignment, reclassification or separation.

The Navy isn&#8217;t the only service to tighten rules on body art.

The Marine Corps uses naval administration messages as guidelines to form some of its own regulations.

The Corps regulations apply to both on- and off-duty Marines, and stipulates that males will not wear earrings and neither sex is permitted &#8220;eccentricities,&#8221; said spokesman Capt. Jeff Landis, citing a few examples.

When in civilian clothes, &#8220;Marines will ensure that their dress and personal appearance are conservative and commensurate with the high standings traditionally associated with the Marine Corps,&#8221; the regulation reads.

Tattoos or brands on the neck and head are prohibited and &#8220;attaching, affixing, or displaying objects, articles, jewelry or ornamentation to or through their skin, tongue or any other body part&#8221; is banned in the Corps.

In general, clothing cannot be used to cover unauthorized tattoos or brands. Removing tattoos will be done at the servicemember&#8217;s expense.

Members failing to comply are subject to Article 92 of the Uniform Code of Military Justice, and face the maximum penalty of a dishonorable discharge or dismissal, two years&#8217; confinement, total forfeiture of pay and allowances and a reduction to the lowest pay grade.

The military does not have a specific category to log voluntary or involuntary discharges based on failure to remove or modify tattoos and body art, and therefore has no way of tracking it, a Pentagon spokeswoman, Maj. Sandra Troeber, said.

However, there are cases that have been grandfathered. In the Air Force, for example, members with existing tattoos that violate the regulation can keep them, if they are not excessive or offensive, so long as they can be covered with the uniform.

Existing Army and Air Force regulations are similar and ban tattoos or brands visible in the dress uniforms, tattoos and body art that are extremist, indecent, sexist or racist, regardless of body location and whether in or out of uniform.

The Air Force defines &#8220;excessive&#8221; as tattoos or brands that exceed one-fourth of the exposed body part or those above the collarbone and readily visible when wearing an open collar uniform.

Senior Airman Shannon Mc-Kean, stationed at McGuire Air Force Base, N.J., got his Viking warrior tattoo on the side of his neck before he enlisted in the service in 1999 &#8212; which also means before the 2001 regulation banning it.

He understands the need for the detailed regulations and thinks some ornamentation, specifically a forked tongue, &#8220;is a bit extreme.&#8221;

In the Army, decorations not deemed extremist, indecent, sexist or racist, but are visible in dress uniforms, are authorized for soldiers who enlisted before July 1.

&#8220;We allow an applicant to enlist with small, innocuous tattoos as we have in the past,&#8221; he said, adding, however, that Army leaders are reviewing the policy.

&#8220;We have denied entry to applicants who cannot meet the tattoo requirement, but with very minimal impact. Those we denied were gross violations of the regulation or the tattoo led us to the fact that the applicant was a member of a racist or extremist organization. All tattoos that are questionable must have a battalion commander&#8217;s review.&#8221;