Rocky is a 4-year-old Belgian Malinois assigned to Naval Security Forces Bahrain, Military Working Dog Division. Most of the 20-some dogs in the unit are either Belgian Malinois or German shepherd. The canines are known for the intelligence, devotion to their handlers and their keen sense of smell, sight and hearing. (Jennifer H. Svan / S&S)

Rocky is a 4-year-old Belgian Malinois assigned to Naval Security Forces Bahrain, Military Working Dog Division. Most of the 20-some dogs in the unit are either Belgian Malinois or German shepherd. The canines are known for the intelligence, devotion to their handlers and their keen sense of smell, sight and hearing. (Jennifer H. Svan / S&S) 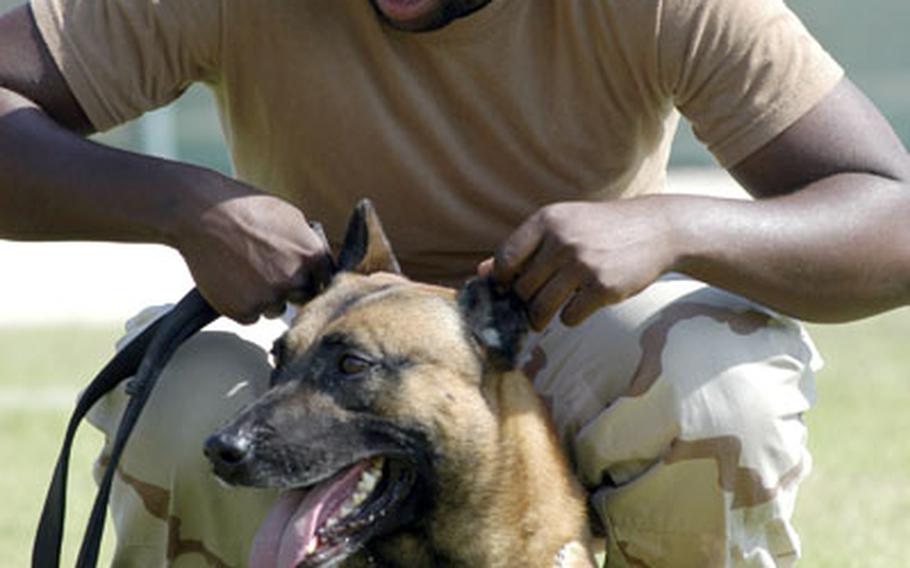 Petty Officer 3rd Class Benjamin Brown holds up his hands in surrender while Joey, a Belgian Malinois stands guard, demonstrating just one of many ways master-at-arms at the U.S. Navy base in Bahrain can use military working dogs in law enforcement. (Jennifer H. Svan / S&S) 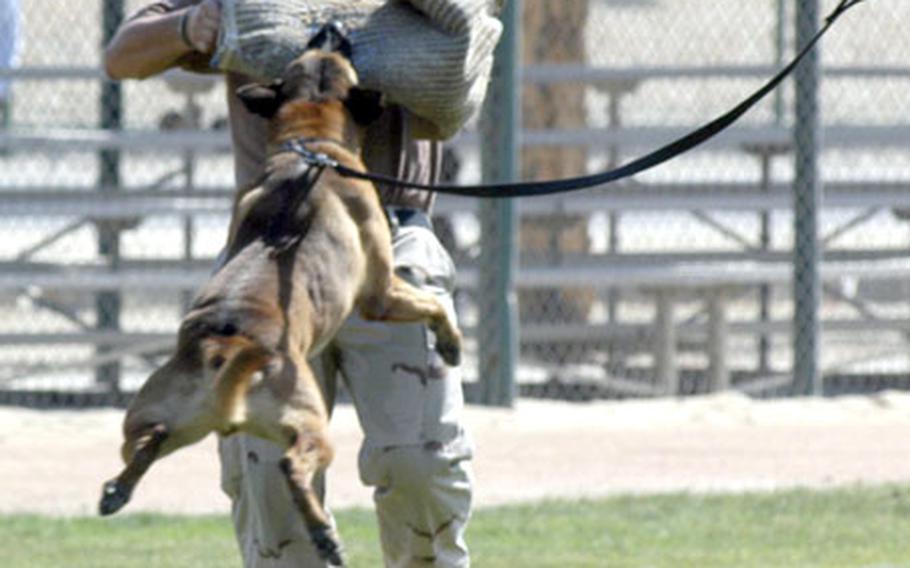 Petty Officer 2nd Class Adam Leeds, a master-at-arms and dog handler, shows off Rocky’s grip by swinging him through the air during a military working dog demonstration last week at the U.S. Navy base in Bahrain. (Jennifer H. Svan / S&S)

If there&#8217;s one thing Brown, 23, has learned since joining the military working dog field, it&#8217;s the importance of patience.

Brown and Rocky are with Naval Security Forces Bahrain, Military Working Dog Division. With about 18 sailors and 22 dogs, the unit is the largest in the Navy, said kennel master Petty Officer 1st Class Jennifer Valdivia. The division has gained six dogs in the past three years, while the Navy&#8217;s military working dog mission has grown around the world, she said.

Handlers and their dogs from across the service deploy to Afghanistan and Iraq, where they hunt for explosives and weapon caches in huts, tunnels, caves and entry control points.

The Navy&#8217;s dogs in Bahrain are mostly German shepherds and Belgian Malinois, but the kennel also has a Dutch shepherd and a Labrador retriever. The U.S. military purchases working dogs from breeders overseas for about $4,000 a pup, the handlers said. The 341st Training Squadron at Lackland Air Force Base in Texas trains the dogs and handlers from all four branches of service.

In Bahrain, the dogs and their super snouts are used to sniff out bombs or drugs on base, around the island and smaller U.S. military camps in the Middle East; at the military side of the Bahrain airport, and at the Minasulman pier, where U.S. Navy and coalition ships dock.

They also are tasked to help with Secret Service and U.S. dignitary visits in the region, from Jordan to Pakistan, providing patrol and explosive detection. Patrol duty, Valdivia said, &#8220;is the biting, aggression part of it.&#8221;

Anyone who saw the dogs in action during a demonstration last week at Naval Support Activity Bahrain knows that the canines&#8217; bite is indeed bigger than their bark. The handlers wore thick protective arm sleeves as one dog at a time was instructed to &#8220;Get &#8217;em.&#8221; At one point, Rocky was clamped on so tightly to decoy Petty Officer 2nd Class Adam Leeds&#8217; covering that he swung Rocky around in the air.

Leeds said his Belgian Malinois, Joey, and the other dogs can also be gentle with an unshakable devotion to their handlers.

That affectionate side can sometimes get in the way of training. Brown is trying to teach Rocky how to &#8220;low crawl.&#8221;