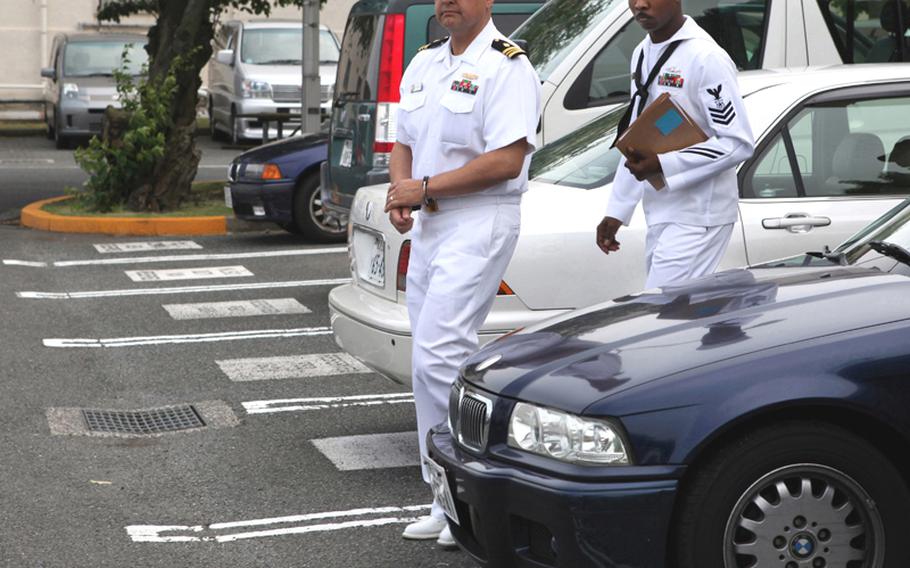 Buy Photo
Navy Lt. Cmdr. Anthony Velasquez is escorted from the Yokosuka Naval Base court Wednesday after being found guilty on two counts of wrongful sexual contact and two counts of conduct unbecoming an officer. (Grant Okubo/Stars and Stripes)

YOKOSUKA NAVAL BASE, Japan &mdash; A Navy doctor pleaded guilty to two counts of wrongful sexual contact and two counts of conduct unbecoming an officer in exchange for having 29 other counts of criminal allegations dropped at a Yokosuka Naval Base court-martial Wednesday.

Under the terms of a pretrial plea agreement, Lt. Cmdr. Anthony L. Velasquez, 48, will not serve more than seven days of confinement at the Yokosuka Naval Base brig.

Military judge Cmdr. David Berger sentenced Velasquez to two years in prison, a $28,000 fine and forfeiture of all pay and allowances, but the convening authority suspended the punishment in accordance with a pretrial agreement.

Velasquez will not serve any additional time or pay the fines and forfeitures unless he violates the plea agreement by committing another crime within the next year. Berger also ordered Velasquez dismissed from the Navy.

His medical credentials have been suspended since last year and will come under review by civilian credentialing boards.

The prosecution had as many as 23 purported victims it would have called to testify against Velasquez had the trial gone forward, according to court documents.

A former enlisted sailor testified she once looked forward to climbing the Navy&rsquo;s ranks. However, she said the episode and how she was treated after reporting the Jan. 13, 2008, incident convinced her instead to leave the military.

&ldquo;I wasn&rsquo;t taken seriously &hellip; when I reported this; nothing happened,&rdquo; said the former sailor. &ldquo;I couldn&rsquo;t do anything. I had no power.&rdquo;

The enlisted sailor filed a report with Naval Criminal Investigative Service agents at Atsugi shortly after the incident. Three more of Velasquez&rsquo;s patients made allegations against him soon afterward.

The sailor and the three others were then told nothing about the results until finding out more than a year later that no action had been taken against Velasquez by U.S. Naval Hospital Yokosuka, which oversees the Atsugi branch clinic.

According to testimony, the hospital discounted the sailor&rsquo;s story, failed to reach a second complainant and ignored the other two &mdash; despite NCIS providing the complaints to the hospital.

Cmdr. Lorraine Nadkarni, a doctor and the hospital&rsquo;s peer reviewer, reviewed 371 of Velasquez&rsquo;s patients&rsquo; medical records beginning in March 2008, and spoke with 40 other women but received no complaints from them, she testified.

However, Nadkarni said, she had never been notified by her hospital about two of the complainants to NCIS, nor of another woman who later gave her statement to prosecutor Lt. Emily Dewey.

Nadkarni recommended that the hospital defer judgment on Velasquez until after the NCIS investigation ended. Instead, the hospital cleared Velasquez of wrongdoing by April 14, 2008, while the investigation was ongoing, according to documents obtained by Stars and Stripes.

Nadkarni also recommended to the hospital that Velasquez only be allowed to treat male patients, she testified.

Instead, the hospital then sent Velasquez as an individual augmentee to Camp Arifjan, Kuwait, without telling officials about Nadkarni&rsquo;s recommendation, according to testimony from multiple witnesses.

Hospital officials declined to answer why they did not initially take action against Velasquez, citing a federal law that keeps &ldquo;medical quality assurance records&rdquo; confidential.

Had they acted in 2008, they might have stopped three of the crimes Velasquez pleaded guilty to from ever happening, according to evidence presented in the case.

The military allows servicemembers to have opposite-sex stand-ins during medical evaluations. The stand-ins are generally hospital corpsmen or medics who rank well below the doctors and nurses.

One soldier testified that there were two &ldquo;stand-ins&rdquo; in the examination room when Velasquez penetrated her vagina with an ungloved hand, but that they were not paying attention.

&ldquo;I don&rsquo;t trust anybody in the Navy now,&rdquo; the soldier testified via video feed.

During his unsworn statement to the judge, a tearful Velasquez apologized to his patients and his family for his &ldquo;despicable&rdquo; acts.

&ldquo;The hardest thing is looking into my wife&rsquo;s eyes and my children&rsquo;s eyes, knowing someday I&rsquo;ll have to explain this to my kids,&rdquo; he said.

Velasquez will have to register as a sex offender upon return to the United States, Navy officials said Wednesday.