Petty Officer 2nd Class Frederick Heimgartner, 25, left, and Petty Officer 1st Class Mark Trumbull, 29, suit up for a dive in which they planned to scour an area of the Persian Gulf for an anchor lost by a tugboat. (Sandra Jontz / S&S)

Petty Officer 2nd Class Frederick Heimgartner, 25, left, and Petty Officer 1st Class Mark Trumbull, 29, suit up for a dive in which they planned to scour an area of the Persian Gulf for an anchor lost by a tugboat. (Sandra Jontz / S&S) 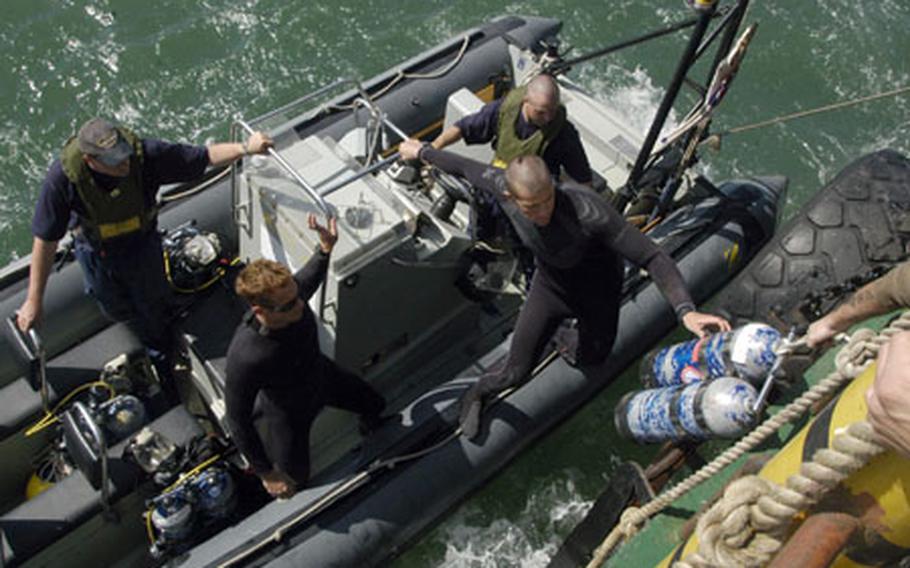 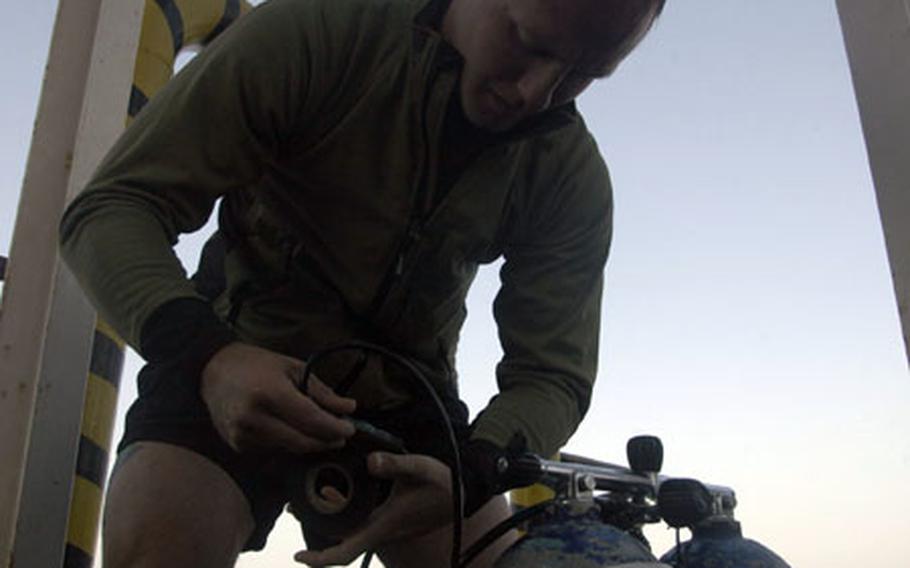 Petty Officer 2nd Class Brock Tetrick, 25, attaches a regulator to the oxygen tanks in preparation for a dive. The Navy divers of Mobile Diving and Salvage Unit 1, Detachment 3, based in Hickam Air Force Base in Hawaii, are deployed to the 5th Fleet area in the Middle East. (Sandra Jontz / S&S) A row of combat boots are left behind after the Navy divers leave the platform of Ocean 6, a barge attached to the Khawr al Amaya Oil Platform in the Persian Gulf. (Sandra Jontz / S&S)

ABOARD BARGE OCEAN 6 &#8212; Petty Officer 2nd Class Frederick Heimgartner started his Navy career as a storekeeper, and having served on a submarine, worked as the boat&#8217;s specialized rescue diver &#8212; but as extra duty.

His 6-foot-4-inch frame meant the racks on the sub were much too small, and Heimgartner, 25, slept stretched out on the floor of the storekeeper&#8217;s office.

Now he&#8217;s a Navy Diver, a small close-knit community of about 900 sailors struggling to keep up with missions in a field that officials say is undermanned and overworked.

The Navy created the specific ND rating in October, and offered up a $25,000 bonus to those who successfully completed the rigorous diving school, said Chief Petty Officer Paul Adams, 37, a dive master of Mobile Diving and Salvage Unit 1, Detachment 3, based in Hickam Air Force Base, Hawaii.

The field is open to anyone. Only roughly 1 percent of the Navy&#8217;s divers are female, Adams said.

&#8220;Most of the guys who become divers were very athletic in high school,&#8221; said Adams, one of about 100 master divers in the Navy. &#8220;And most have a college degree, but chose to become enlisted to do the job. Officers usually do the administrative side of it, and they want to be the ones who get out there and dive.

The team is in the Middle East as part of the big-picture maritime security operations mission under the command of the Navy&#8217;s 5th Fleet.

They scour the hulls of vessels for explosives before they are permitted to approach ships, barges and oil platforms. They spent several days this week searching for an anchor that snapped off a tugboat in the Persian Gulf.

Divers have recovered bodies of fisherman and trained sailors of other nations to become proficient divers.

Perhaps the perils of the job lead to some of their superstitions &#8212; such as tattoos of a rooster and pig bringing good luck.

Tetrick tattooed each on the tops of his feet. The story is traced to the days in which ships were wooden, and the animals were on board as food for the crew. Once a ship sank, and the rooster and pig survived by floating on wooden cages, Tetrick explained.