Navy diver pushes himself to the limit in Ironman vacation 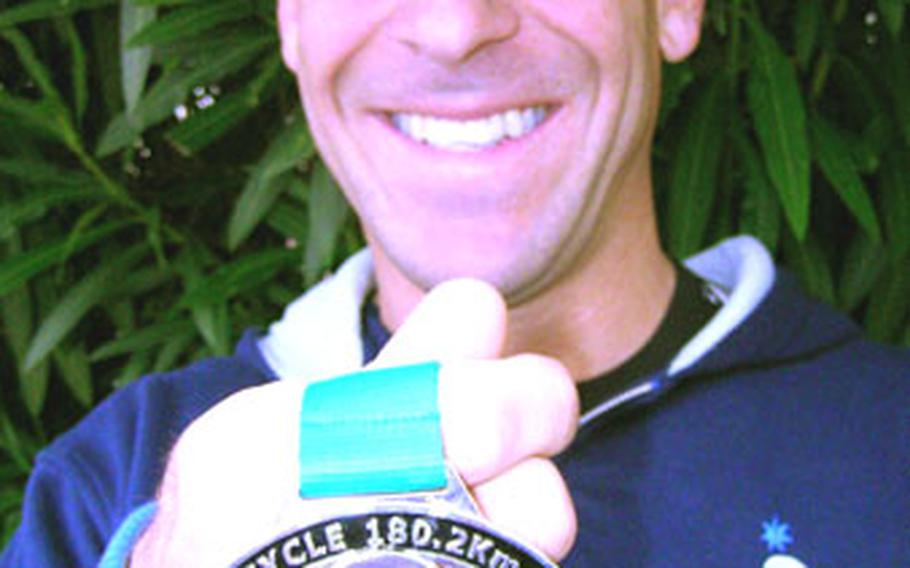 Chief Petty Officer Brian Haug took some time off work at the Explosive Ordnance Disposal detachment at Yokosuka Naval Base to race in the Ironman Australia Triathlon on April 2. (Allison Batdorff / S&S)

Sure, the 43-year-old ordnance clearance diver saw some sights and spent a few days in New Zealand, but the real purpose was to test his physical and mental mettle. Or, in this case, metal &#8212; as in the Ironman Australian Triathlon in Port Macquarie, Australia.

The U.S. Navy has been a part of the Ironman competition since Cmdr. John Collins founded it after a 1978 disagreement about whether swimmers, bikers or runners were more fit.

Haug ran several marathons and half-Ironman races before considering the idea, as qualifying times are required for a full Ironman.

Haug began training in January on a schedule that started with six hours a week, escalating to 16 hours. He rotated through the cycle a few times before tapering began. EOD&#8217;s rigorous 10-hour-a-week fitness requirements helped immensely, Haug said; so did Yokosuka&#8217;s hills.

Keeping the body from seizing up required measuring to the mouthful hydration, anti-cramping pills, energy slurry and &#8220;goo,&#8221; a liquid energy bar. He also fashioned a four-flask fuel belt for the marathon.

Haug had it down to a science &#8212; which comes naturally. On the fifth month of a six-month active-duty recall, he&#8217;s a geologist in his hometown of Portland, Ore.