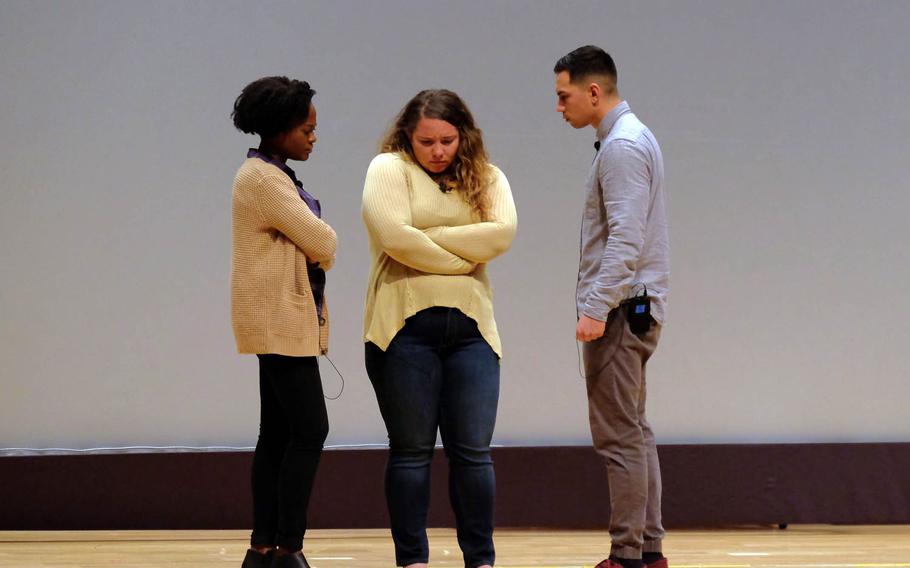 Members of the Pure Praxis actors' group role-play a scenario involving a sailor being ostracized by her friends after reporting being raped, Wednesday, Feb. 15, 2017, at Yokosuka Naval Base, Japan. (Tyler Hlavac/Stars and Stripes)

Members of the Pure Praxis actors' group role-play a scenario involving a sailor being ostracized by her friends after reporting being raped, Wednesday, Feb. 15, 2017, at Yokosuka Naval Base, Japan. (Tyler Hlavac/Stars and Stripes)

YOKOSUKA NAVAL BASE, Japan — The Navy is revamping its approach to combating sexual assault in its presentation to sailors and potentially in the way it monitors the accused.

Lectures with bullet points on large screens are being sidelined in favor of actors role-playing the tough issues, as 7th Fleet sailors at Yokosuka saw Tuesday and Wednesday during programs that addressed themes like victim retaliation and male-on-male sexual assault.

Scenarios included a sailor being ostracized by friends and peers for reporting a rape, and a sailor struggling to reconcile a childhood sexual assault with his ideas of traditional masculinity.

Sailors who spoke with Stars and Stripes following the performances generally agreed that the actors gave the issues more emotional resonance.

“I’ve been in the Navy 13 years and it’s all been PowerPoint,” said Petty Officer 1st Class Roberto Coriano, a ship’s serviceman at Yokosuka’s Naval Supply Fleet Logistics Center. “Bringing [the training] on stage, it makes you think about it more. [Sailors] see the real thing on stage.

“You hear about these situations but when you see it physically it bothers you more.”

The scenarios the actors portray are realistic, said Petty Officer 2nd Class Jacob Hightower, a quartermaster aboard the USS Shiloh. Hightower said he recently intervened in an incident at an off-base club where a group of men was aggressively harassing a female.

“I like this type of training,” he said. “PowerPoints are boring; people fall asleep and they are kind of pointless. Getting involved [in the role-playing] allows people to examine how they would actually respond in a real-life scenario.”

Half of Pure Praxis’ performances center on victim retaliation, with sailors being asked to analyze retaliation scenarios acted out in front of them.

Although the Navy is seeing fewer sexual-assault incidents, victim retaliation continues to be an issue.

A 2014 RAND survey found that roughly half of all active-duty female servicemembers who reported a sexual assault believed they suffered professional or social retaliation.

“We see reports of survivors who say the worst part of reporting sexual assault is when they come back to their ship or unit and they are ostracized by their own peers and friends,” Loftus said.

Retaliation and social ostracism plays a possible role in the rise of restricted sexual-assault reports.

With a restricted report, the names of the victim and accuser are kept confidential, allowing the victim to receive treatment without triggering a legal response toward the assailant.

The Navy’s 2015 report on sexual assault, the service’s most recent report, showed a 25 percent increase in restricted reports not converted into unrestricted ones, where authorities investigate the crime.

Loftus attributes this to better Navy training in recent years encouraging more sailors to report sexual assaults they survived prior to joining the service. Servicemembers are keeping the report restricted to avoid implicating a friend or family member, she said.

However, the Navy is considering a change — pending legal review — to the restricted reporting system that could preserve victim anonymity while giving the service a better chance of spotting serial predators.

Following a restricted report, an alleged assailant’s name would be placed in a database for future tracking, Loftus said.