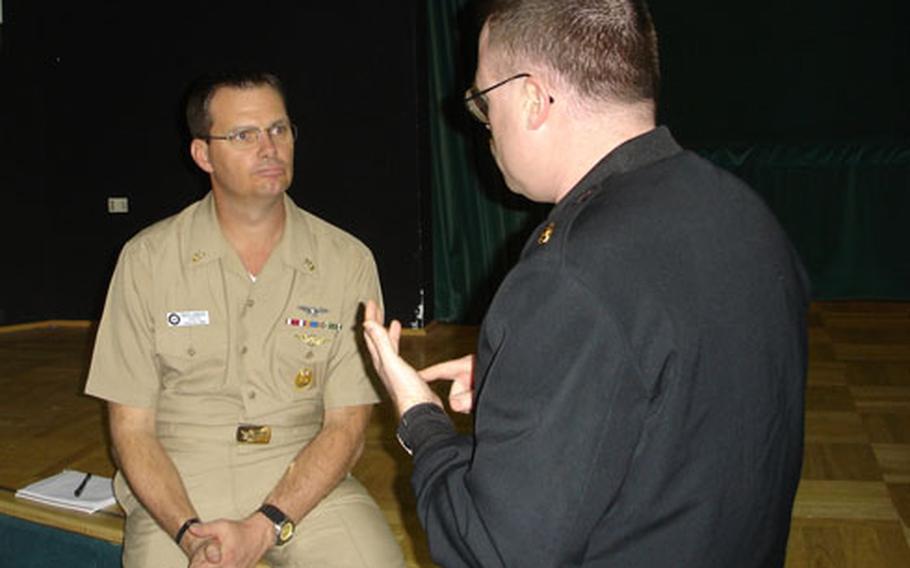 Command Master Chief Kenneth Ellenburg, left, a briefer from the Navy’s Center for Career Development, talked to sailors in Naples on Friday while traveling to Europe and Africa to discuss the Navy’s latest career initiatives. (Lisa M Novak/S&S)

NAPLES, Italy &#8212; In this era of financial downturns and increasing unemployment rates, military careers may look brighter by the day.

But the military is also affected by civilian economic forces, and reaching that 20-year mark isn&#8217;t as easy as it used to be.

A team of Navy detailers from Millington, Tenn., traveled to Europe this week, and will be in Africa next week, to provide information on the latest force-shaping initiatives.

Naples was the first stop for the Navy Personnel Command&#8217;s career management symposium, designed to brief Navy servicemembers &#8212; enlisted and officers of all ranks &#8212; on retention issues in what has increasingly become a highly competitive work environment.

Despite overmanned career fields, shrinking bonuses, and stringent enlistment and re-enlistment requirements, retention is at an all-time high.

"With the economy the way it is, no one wants to get out," said Command Master Chief Petty Officer Kenneth Ellenburg, the Aviation Liaison at the Navy&#8217;s Center for Career Development. "The retention numbers are not lying: 62 percent retention in Zone A (first-term sailors) when we were only geared for 50. These are historical numbers."

With several career fields overmanned, particularly at the senior enlisted levels, the Navy has instituted a number of force-stabilization measures including waivers for time in grade, enabling some individuals to leave the service early and retain retirement benefits, as well as reduced re-enlistment bonuses and continuation boards.

"When you level out the playing field, and get the overmanned rates down to where you need them to be, the right people are going to advance, because they&#8217;re the folks that have been working the hardest to get ahead." Ellenburg said. "The best performers always rise to the top and get promoted."

The symposium includes several briefings on manpower, professional development initiatives, and prospective changes, such as the possibility of indefinite enlistments for senior enlisted sailors with more than 10 years of service.

"I found the briefing very helpful, especially all the updates on the programs that affect us," said Petty Officer First Class Victor Rucker, a master-at-arms with 15 years in the Navy.

"The info here is good for anyone looking to stay past 20. This is the first time I&#8217;ve been able to come to one of these symposiums. When you start your career, this is the stuff you need to know to get where you want in the Navy," Rucker said.

Team members will be in Sigonella and Djibouti on Monday.

Information on all of the Navy&#8217;s force shaping initiatives can be found on the Navy Personnel Command Web site at www.npc.navy.mil