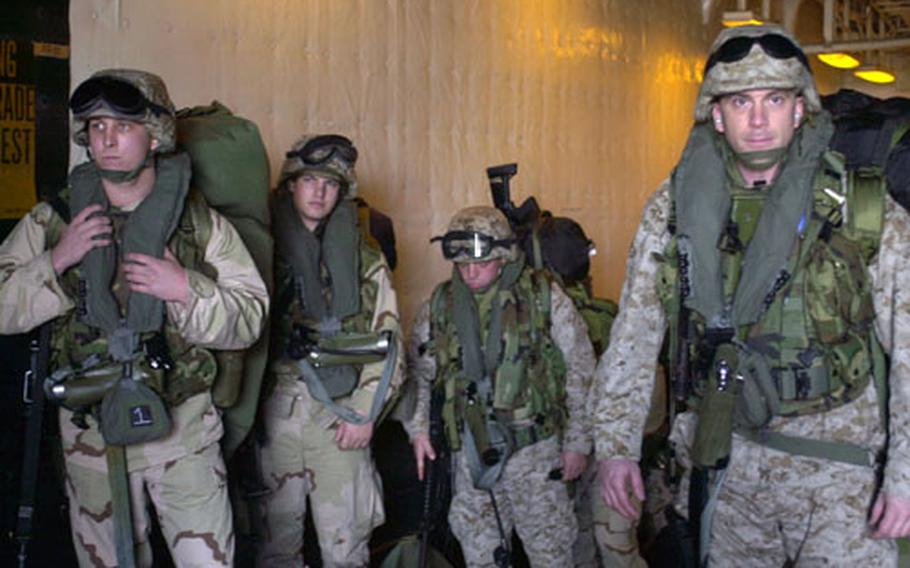 Marines from the II Marine Expeditionary Force prepare to get on a CH-46 helicopter from the USS Bataan on Friday. Two amphibious assault ships unloaded Marines and gear in Kuwait as part of a huge rotation of forces into Iraq. (Scott Schonauer / S&S)

Marines from the II Marine Expeditionary Force prepare to get on a CH-46 helicopter from the USS Bataan on Friday. Two amphibious assault ships unloaded Marines and gear in Kuwait as part of a huge rotation of forces into Iraq. (Scott Schonauer / S&S) 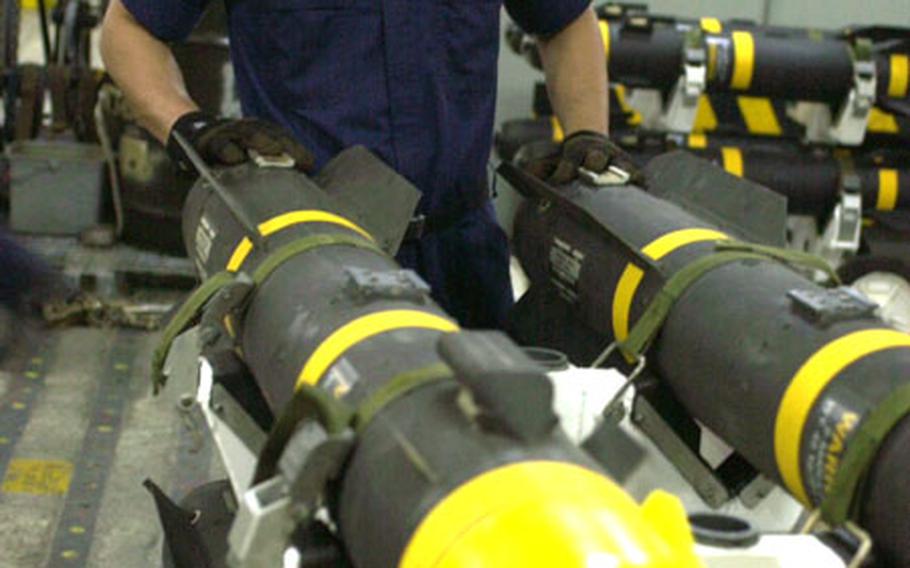 Navy Seaman Henry Gonzalez moves a cart of Hellfire missiles out of the USS Bataan&#39;s magazine Thursday in the Persian Gulf. The Bataan dropped off Iraq-bound Marines and equipment in Kuwait on Friday. (Scott Schonauer / S&S) 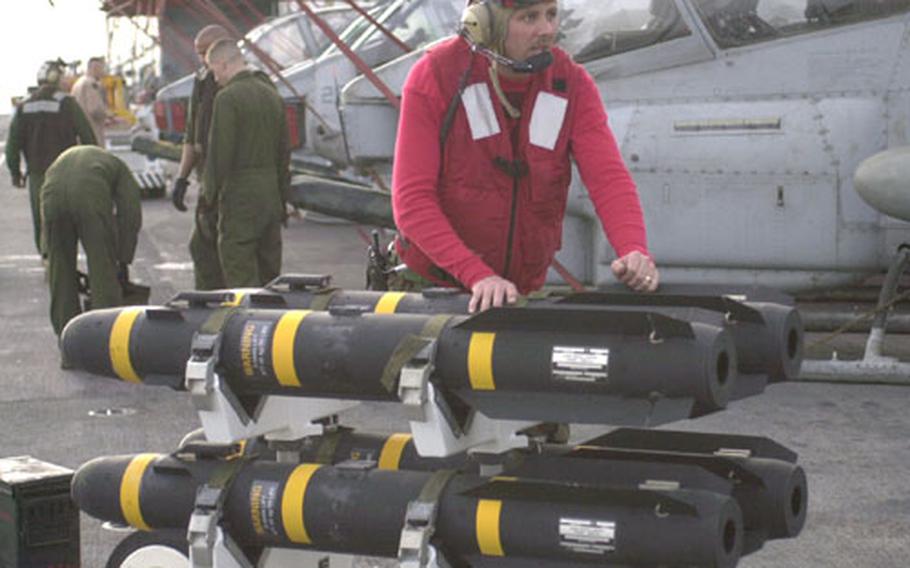 Petty Officer 1st Class Brad Hope moves a cart of Hellfire missiles to be loaded onto a Cobra helicopter aboard the USS Bataan in the Persian Gulf on Thursday. (Scott Schonauer / S&S)

ABOARD THE USS BATAAN &#8212; A flurry of hovercraft and helicopters began unloading hundreds of Iraq-bound Marines and their gear in Kuwait on Friday as part of the largest rotation of U.S. forces since World War II.

Two Navy amphibious assault ships that carried the troops, ammunition, vehicles and tons of equipment into the Persian Gulf will continue the massive offload over the next two days.

The units will be part of a 25,000-member air-and-ground task force that will replace the Army&#8217;s 82nd Airborne Division in the volatile region west of Baghdad. Overall, tens of thousands of replacement troops are moving in or out of Iraq. More than 40,000 troops scheduled to deploy to Iraq have moved into theater, and 35,000 of those set to leave have headed home, Army Brig. Gen. David Rodriguez, a Joint Staff spokesman said in a news release Thursday.

Meanwhile in the same day, Marines aboard the Bataan ate a last meal of king crab legs and prime rib as part of what was called a &#8220;farewell dinner.&#8221; Over the past six months, many of them have seen the Army take casualties and understand the risks they face.

Lance Cpl. Garing Armstead, 19, of New Brunswick, N.J., said he barely slept the night before getting off the Bataan.

Lance Cpl. Steven Davidson, 20, of Hampton, Va., a CH-46 helicopter mechanic with Marine Medium Helicopter Squadron 261, said the only other foreign country he has ever visited is Canada.

While this weekend&#8217;s offload is just one small piece of the big rotation, it is a massive operation that took weeks of preparation.

In three days, Marines will unload what took a week to pack into the pair of 844-foot assault ships. Most of the ship&#8217;s magazine will be cleared out before the Bataan leaves the gulf.

&#8220;This place will be empty,&#8221; ordnanceman Petty Officer 1st Class Todd Delmater said standing among boxes of missiles and rockets.

The Bataan will drop off 413 short tons of cargo using the LCACs &#8212; a hovercraft that glides over the water with the help of huge fans powered by aircraft engines. They will also drop off 420,000 pounds of ammunition at a Kuwait navy base used by American troops, said Master Gunnery Sgt. Greg Stimmell, a member of a combat cargo team coordinating the operation.

All of the East Coast units will augment forces from the I Marine Expeditionary Force based at Camp Pendleton, Calif.

As soon as the Bataan finishes dropping off the Marines and equipment, it will turn around and head back to the States. Sailors will make two port visits along the way, but many said they would like to steam straight home.