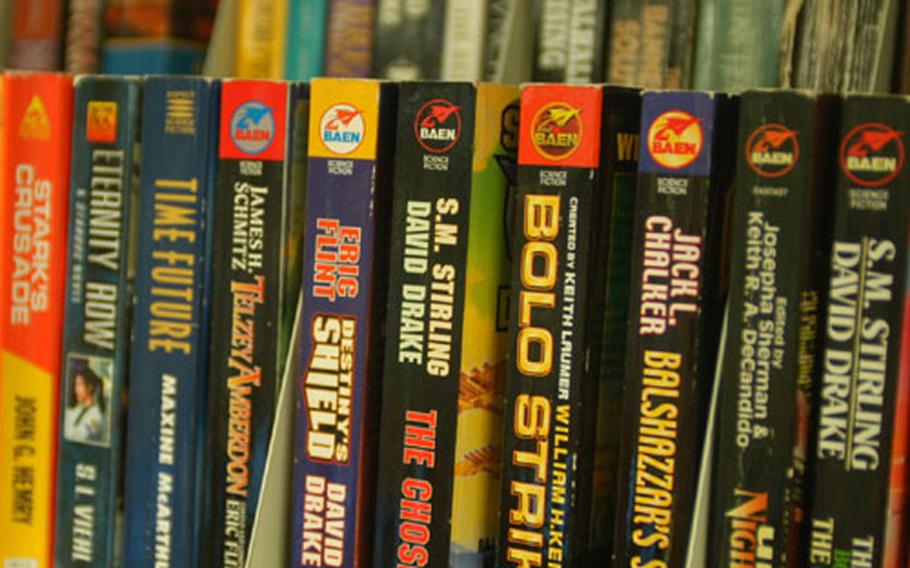 NAPLES, Italy &#8212; For sailors who enjoy reading science fiction and fantasy novels, a six-month deployment might soon seem to pass a little quicker.

Navy Morale, Welfare and Recreation recently signed a commercial-sponsorship agreement with publisher Baen Books to provide 10 hardcover novels and selected CD-ROMs to all ships and submarines each quarter.

The CD-ROMs will have maps, charts, artwork, interactive games and several complete novels that can be downloaded to a computer or a PalmPilot.

Jessica Whitworth, a Naples library technician, said that fantasy and science fiction novels are some of the library&#8217;s more popular checkouts. The new hardcover books, and especially the electronic novels, she said, will go over well aboard ship.

All Navy ships are limited on space. Aircraft carriers have the largest on-board libraries while some of the Navy&#8217;s smallest ships don&#8217;t have libraries.

A Trident missile submarine&#8217;s crew study room doubles as a library. The room also has four computers where crewmembers can take college courses and specialized submarine training courses. Now, they will also be able to use the computers to read novels or download books to PalmPilots.

The addition of the electronic novels will make a big difference for those who enjoy sci-fi or fantasy.

&#8220;Definitely, especially nowadays,&#8221; said Petty Officer 1st Class Harry Newbold, who has served on a Trident submarine and fast-attack boat. &#8220;PalmPilots are getting real big. The new Dell [model], you could almost put a full movie on them.&#8221;

The Navy has 94 ships and 35,908 sailors currently on deployment.