Navy cracking down on stormwater pollution at bases in Japan 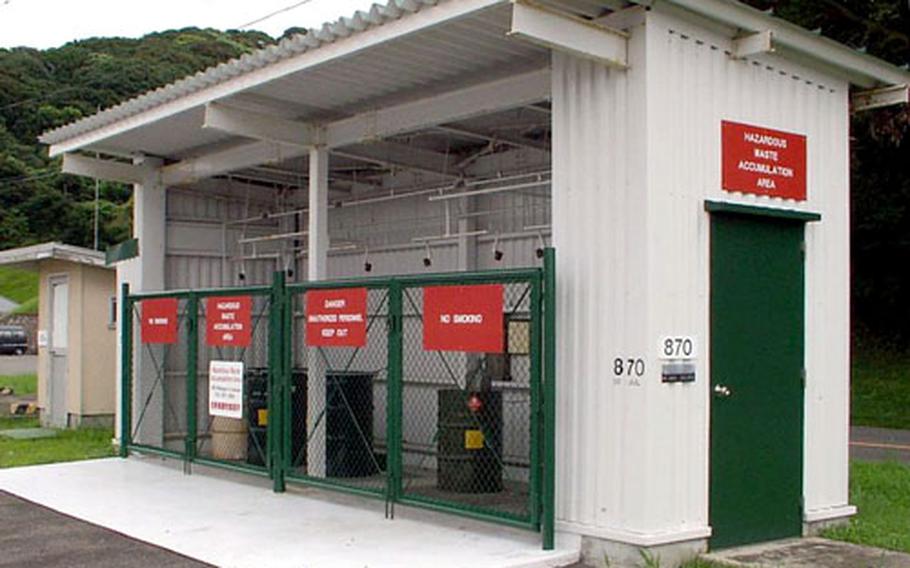 YOKOSUKA NAVAL BASE, Japan &#8212; When you see soap suds in Tokyo Bay after one of Japan&#8217;s frequent rainstorms, it&#8217;s not because the water is extra clean.

Sudsy, oily and murky water is largely due to stormwater runoff and the all-too-common practice of putting things into Japan&#8217;s storm drains that don&#8217;t belong there.

&#8220;It&#8217;s out of sight, out of mind,&#8221; says Ed Moon, a Commander, U.S. Naval Forces Japan environmental engineer who works out of Yokosuka Naval Base. This, along with the popular axiom &#8220;the solution to pollution is dilution,&#8221; doesn&#8217;t hold water when it comes to stormwater runoff, he said, and U.S. military bases in Japan have started to do something about it.

Simply put, stormwater pollution is the gunk that gets washed into storm drains, which have no filters. The gunk moves untreated and is discharged directly into the water system. The result accounts for at least 40 percent of water pollution today, Moon said.

Moon is writing Stormwater Pollution Prevention Plans, or SWPPPs, for all Far East naval installations and said he hopes to be finished by early 2007. Yokosuka, Naval Air Facility Atsugi, Sasebo Naval Base and White Beach Naval Facility Okinawa all have plans in the pipeline. Naval Air Facility Misawa and Diego Garcia come next, Moon said.

SWPPPs pinpoint base-specific problem areas, suggest best management practices and contain interactive maps of the intricate stormwater system on each base. If someone spills oil into a storm drain at point A, the map shows possible places where the spill can be stopped before it&#8217;s discharged into the main body of water.

Oil spills, gasoline leaks, construction and painting debris left out or swept into uncovered drains are some of the common polluting culprits on bases, but each has its own &#8220;idiosyncrasies,&#8221; Moon said.

For example, shipyards have a higher potential for paint or corrosion-control chemicals in the stormwater than do air bases, where fueling stations and fire-prevention chemicals may pose more of a threat, he said.

Even seemingly innocuous events like charity car washes can be harmful, Moon said.

SWPPPs are mandated under the Japan Environmental Governing Standards, the source for environmental compliance, requirements and regulations for U.S. military installations in Japan.

Stateside stormwater is handled differently. The Environmental Protection Agency regulates it under the Clean Water Act of 1987 and began a permitting process for stormwater discharges in 1990. That has not happened yet in Japan, Moon said.

That the Japanese standards &#8212; a biennial product of U.S. Forces Japan and Japan&#8217;s Ministry of Environment &#8212; require bases to have SWPPPs is likely due to the &#8220;proactive measures already being taken in the States and the willingness to lead by example,&#8221; Moon said.

But SWPPPs are just the beginning. After base commanders approve the plans, stormwater pollution prevention teams will be formed to implement them, perform inspections, monitor runoff, conduct training and revise plans as needed.

But in the end, most prevention comes down to &#8220;good housekeeping&#8221; and little decisions like putting down tarps for paint jobs or cleaning up with a broom and dustpan instead of a hose, Moon said.

&#182; Will your operations or activities generate waste? Be certain you have included the proper cleanup equipment when you are staging for your job.

&#182; What are the possibilities of a spill? Perhaps absorbent materials should be included on your staging list.

&#182; Do not pour wastes into storm drains! Wastewater should be disposed into a sink.

&#182; Is secondary-containment rainwater free of oils and chemicals? Always ensure there is no oil sheen present before draining a secondary containment.

&#182; Are drain valves kept in a closed and locked position? This will ensure there is no release if a spill occurs within the secondary containment.

&#182; Is an oil-water separator located in your work area? Ensure such units are cleaned and maintained on a regular basis.

&#182; Are materials exposed to rainwater? If possible, all materials should be stored indoors away from the rain or covered with a tarp.

&#182; Do you smoke? Remember that cigarette butts thrown on the ground most likely will reach surface waters and become fish food.

&#182; Are detergents biodegradable and phosphate-free? If possible, use only water to perform the cleaning operation.

&#182; The water that goes down a sink or toilet in your home or business flows to a wastewater-treatment plant, where it is treated and filtered. &#182; Water that flows down driveways and streets and into a gutter goes into a storm drain, which flows directly to a lake, river or ocean. This water may pick up pollutants along the way.

&#182; Storm drains were designed for the specific purpose of draining water from sidewalks and streets and do not remove pollutants.

&#182; One of the most common pollutants found in storm drains and creeks is detergent from the washing of cars.

&#182; Soil and silt in the water increase water temperature and murkiness, which harm fish and their food supply. Decaying leaves and organic materials in the storm drain increase bacteria and mosquito production and decrease oxygen essential for fish life.

&#182; One gallon of oil in the storm drain can pollute up to one million gallons of storm water.