Navy council to focus on problems with Littoral Combat ships 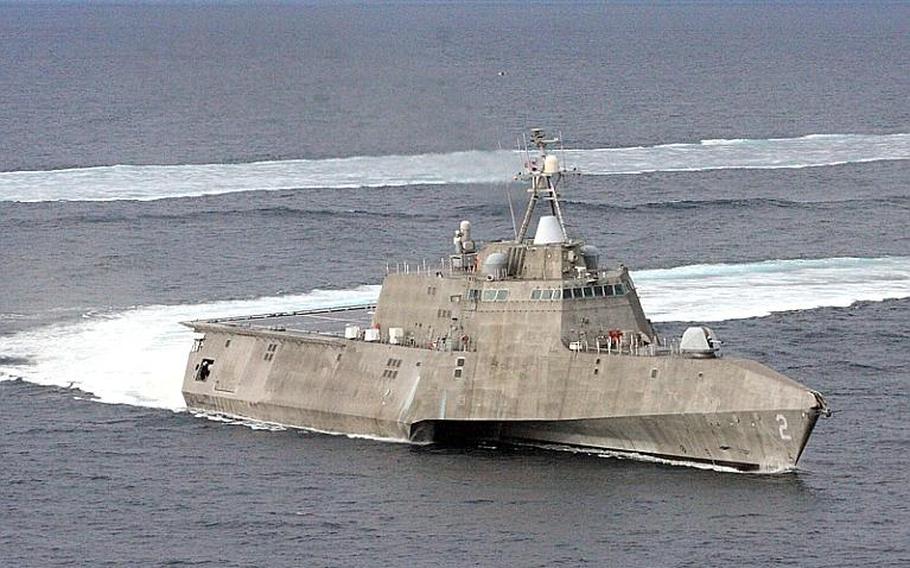 The Littoral Combat Ship USS Independence operates off Southern California. The Navy is assigning a four-person council to tackle problems such as cracked hulls and multiple system failures plaguing the ships. ()

The four-person council appointed Wednesday by the chief of naval operations has been tasked with developing a plan of action for the troubled ships by Jan. 31.

The Navy has long downplayed problems with the ships, which have been called crucial to a leaner future force, even as initial testing has suggested the ships would not survive combat. The program has also faced delays, cost overruns and structural deficiencies.

Navy officials have said it is normal for any new model to struggle with initial hiccups.

&ldquo;I am confident we are on a path of success for LCS,&rdquo; said Secretary of the Navy Ray Mabus in a statement announcing the appointment of the council. &ldquo;This council will continue to unify our efforts to implement operational lessons learned from our research and development ships to further ensure successful fleet integration.&rdquo;

The Navy plans to acquire 55 Littoral Combat ships and has already authorized the purchase of 22 models. The high-speed, quickly constructed ships are designed to operate in shallow waters where larger ships cannot easily maneuver. They are meant to accommodate a variety of warfare systems, allowing the Navy to remove and attach different mission modules as needed.

The USS Freedom and the USS Independence, the first ships built, were hampered by problems that should have been discovered during their developmental stages, according to a Pentagon report released last year. The first vessel, constructed of steel and aluminum and delivered in 2008, soon developed an underwater hull crack, while the second ship had multiple system failures, including problems with its mine-detecting capabilities and its satellite communications systems. The second ship, an aluminum design with multiple hulls delivered in 2009, also experienced hull corrosion.

Both ships are unable to fend off attacks, according to the Pentagon report.

&ldquo;LCS is not expected to be survivable in a hostile combat environment,&rdquo; the report noted.

Adm. Jonathan Greenert, chief of naval operations, who appointed the council, requested biweekly progress reports from the board and called for monthly review meetings, according to a memo released by the Navy.

The Navy received its third Littoral Combat Ship in June, calling it at the time, &ldquo;highly capable, well-built and inspection ready.&rdquo;

Navy officials have declined to release early assessment results. The Navy also refused to provide formal testing results on the ships&rsquo; progress to the Pentagon, according to its report last year.

The Pentagon, &ldquo;cannot provide additional insight in the survivability of the class, or better assess the extent of their vulnerability to expect threats because the Navy has significantly delayed the release of their Detail Design Integrated Survivability Assessment Reports for both designs,&rdquo; the report concluded.

The Project on Government Oversight, a nonpartisan watchdog group in Washington, D.C., sent a report to the Senate and House Armed Services committees in April alleging that it had obtained internal documents that showed the ships faced greater upsets than originally reported by the Pentagon. According to those findings, the first ship has grappled with hundreds of equipment failures since being commissioned, including engine and electricity failures that put its crew in danger.

Ben Freeman, a national security investigator for the watchdog group, applauded the council&rsquo;s creation, but said it remains unclear whether it will receive accurate information about the program&rsquo;s failures.

&ldquo;It&rsquo;s a good sign in a way that the Navy is really taking seriously some of these criticisms about this program; it&rsquo;s good that they are taking a proactive step of saying, &lsquo;What are the problems, how can we fix the problems?&rsquo; &rdquo; Freeman said. &ldquo;But what we have seen in this program is a history of obfuscation &hellip; and I just hope that this council is not subject to that.&rdquo;

Republican Rep. Duncan Hunter of California, among a growing chorus in Congress critical of the Littoral Combat Ship program, has said the ships should not replace other proven vessels slated to be decommissioned. Hunter visited the Independence in San Diego on Tuesday.

&ldquo;Building ships like the Independence and Freedom must not come at the cost of a smaller naval fleet that is incapable of sufficiently projecting power across the world and defending American security interests on multiple fronts against multiple threats, from Iranian small boats to a traditional Chinese Navy,&rdquo; Hunter said in a statement.